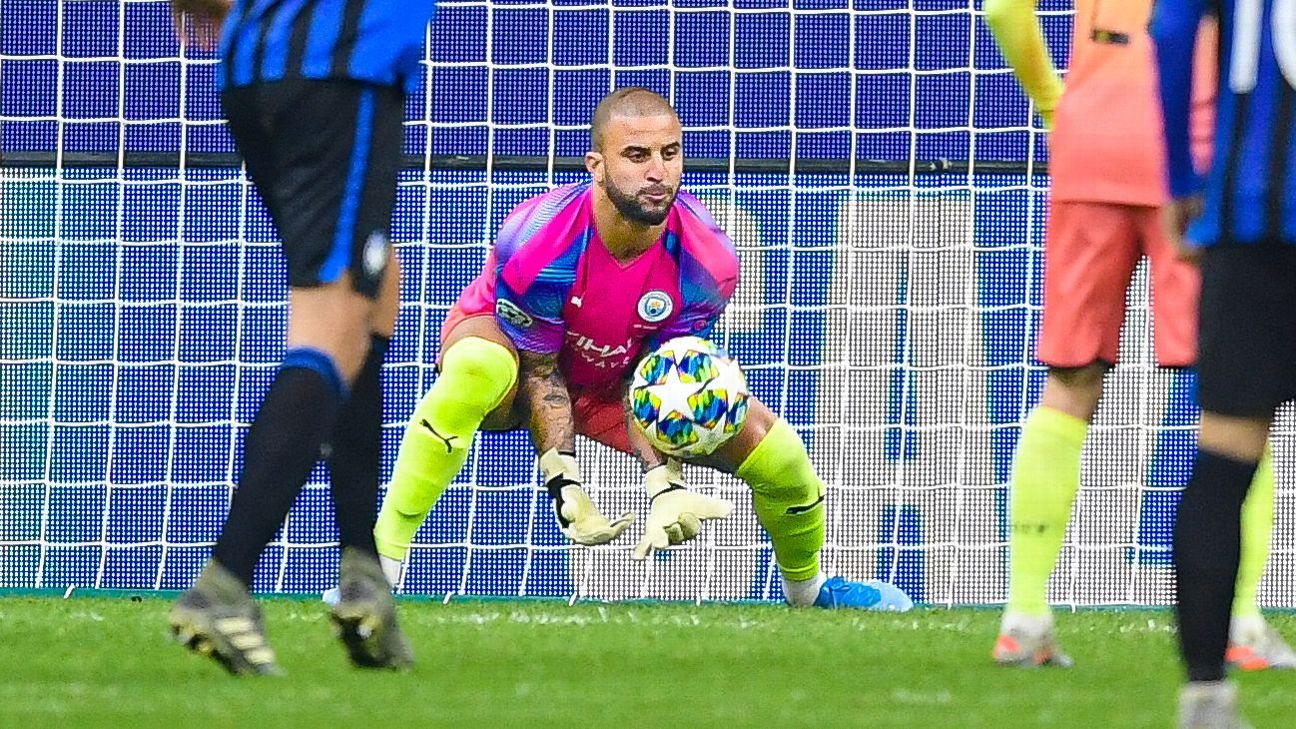 Kyle Walker was Manchester City‘s unlikely Champions League hero by going in goal against Atalanta, joining a list of top outfield players to don the gloves for their team…

Jump to: Pele, Kane, Alves among other star outfielder-turned goalkeepers

Manchester City’s group-stage game against Atalanta on Wednesday night saw one of the rare occurrences in football that always unites fans across the world in pure, unbridled joy: an outfield player having to go in goal.

After replacing Ederson at half-time, City’s reserve shot-stopper Claudio Bravo broke new ground in the 81st minute when he became the first substitute goalkeeper to be sent off in Champions League history.

That left Pep Guardiola without another recognised goalkeeper on the bench and facing the prospect of a morale-sapping shock defeat just days before their Premier League title showdown at Liverpool on Sunday, for which Ederson is now a serious doubt.

The England right-back made a decent fist of his voluntary stint between the sticks, actually making more saves (1) than both Ederson and Bravo (0) had managed between them on the night.

Didn’t expect to be tweeting that tonight… https://t.co/za5PA5f0TB

In fact, Walker successfully kept a clean sheet on his shift as City held on to secure a 1-1 draw at the San Siro. That led to City cheekily altering Walker’s registered position on their official website.

So, *technically*, Walker becomes the fourth most expensive goalkeeper in history — though we’re not entirely certain his place just below Gianluigi Buffon in the ranking will be officially recognised.

Meanwhile, Raheem Sterling — the scorer of City’s early opener — couldn’t hide his amusement at the sight of his mate larking about in goal.

And I’m sorry but this was too funny broooo @kylewalker2 (I wouldn’t trust you holding my baby tho 😂😂😂) pic.twitter.com/ReEJ8B3qDL

Riyad Mahrez was left baffled by his role in the whole affair.

While certainly not a regular occurence, Walker isn’t the first outfielder to take up the gloves — far from it.

Indeed, there is a grand lineage of ersatz goalkeeping that goes back decades, with some big names included on the honour roll. 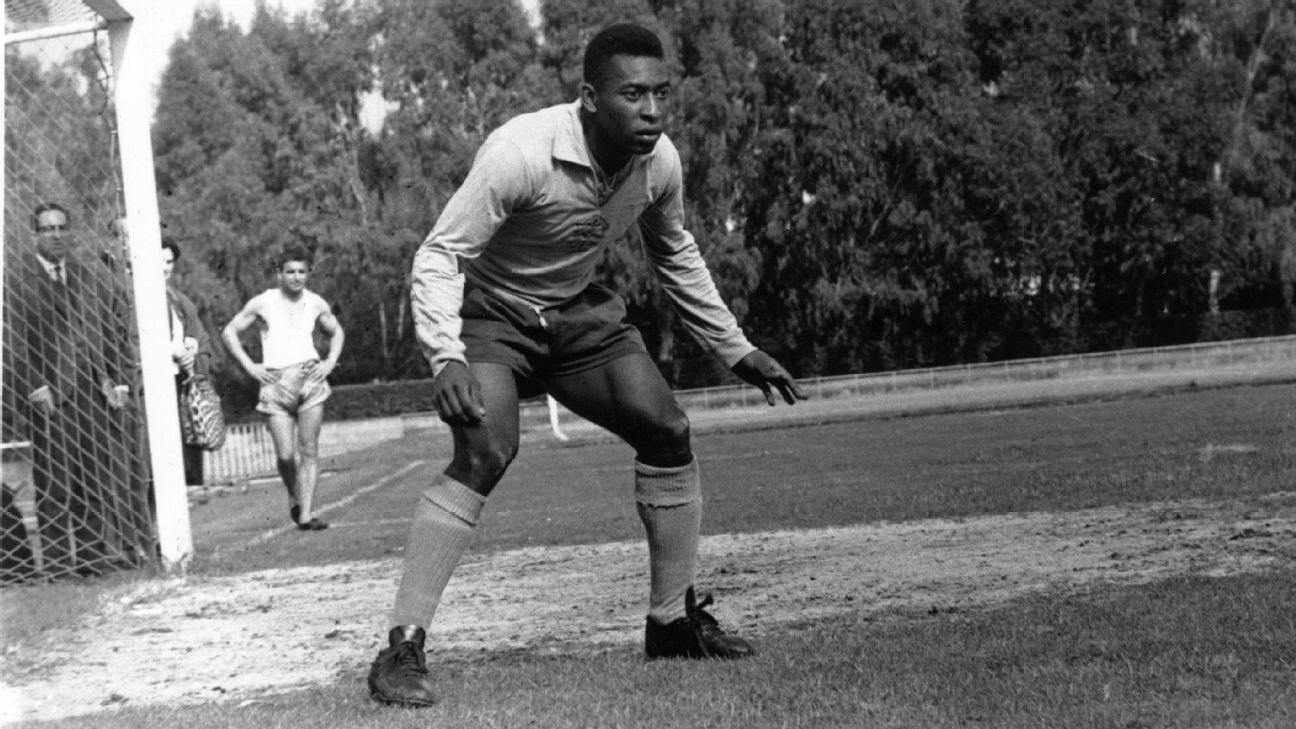 Having already scored a hat trick in a game against Gremio in 1963, Pele replaced Santos goalkeeper Gilmar when he was taken off injured in the second half.

Pele volunteered to take the gloves. And, obviously, he was pretty good too, by all accounts. “He was a great goalkeeper,” said teammate Pepe. “Lithe, as if he could fly.”

Much like Pele, Kane’s dalliance with emergency goalkeeping came after scoring a hat-trick against Ludogorets in the Europa League.

The striker muddled manfully through the last three minutes, conceding once in rather embarrassing circumstances.

No stranger to putting his body on the line for Chelsea, Terry went in goal against Reading in 2006 — the game in which Petr Cech suffered the serious head injury that led to him wearing a scrum cap for the rest of his career — only for his replacement Carlo Cudicini to also get knocked unconscious later in the game.

Anything Kyle Walker can do…

Ferdinand valiantly took up the gloves during Manchester United’s FA Cup quarterfinal clash against Portsmouth in 2008, though immediately conceded via a Sulley Muntari penalty.

The notorious Wimbledon hardman-turned-Hollywood actor (still doesn’t sound right, does it?) went in goal against Newcastle at St James’ Park in 1995 and actually did make a few decent saves. However, he did concede three goals in 30 minutes as the Dons lost 6-1 on the day.

Not content with being one of the most formidable strikers in USWNT history, Hamm also kept a clean sheet for her country at a World Cup after going in goal for the final six minutes of a game against Denmark in 1995.

Fully embracing his role as Manchester United’s resident utility man, O’Shea completed the full set when he took up his position in goal against Tottenham in 2007.

United were already 4-0 up when Edwin van der Sar suffered a broken nose and his unlikely Irish replacement stepped in to ensure that was also the case by full-time.

Wait is that Dani Alves playing goalkeeper for PSG???!! pic.twitter.com/bxQWpzshl6

In a departure from his usual pitch-roaming adventures, Alves for once found himself rooted between the posts when the diminutive Brazilian full-back went in goal for PSG last year.

Lucas Radebe gained instant cult status when he went between the sticks against Man Utd for @LUFC #PLMoment pic.twitter.com/FMyuVO7PbR

Radebe did a good job of keeping Andy Cole and Brian McClair at bay until a fierce Roy Keane strike eventually broke his impressive resolve.

The ultimate, granddaddy, end-of-level boss of all outfield players in goal. Moti attained instant footballing immortality when he took over in Ludogorets’ nets back in 2014.

The grizzled centre-half replaced ‘keeper Vladislav Stoyanov when the latter was sent off in the final minute of extra-time during a tense Champions League qualifier against Steaua Bucharest.

The game duly ended 1-1 and went to penalties, wherein Moti proceeded to both score Ludo’s opening spot-kick and then make two vital saves in the shootout to send his side through to the group stage for the first time ever.

Now that’s how you become a club legend.