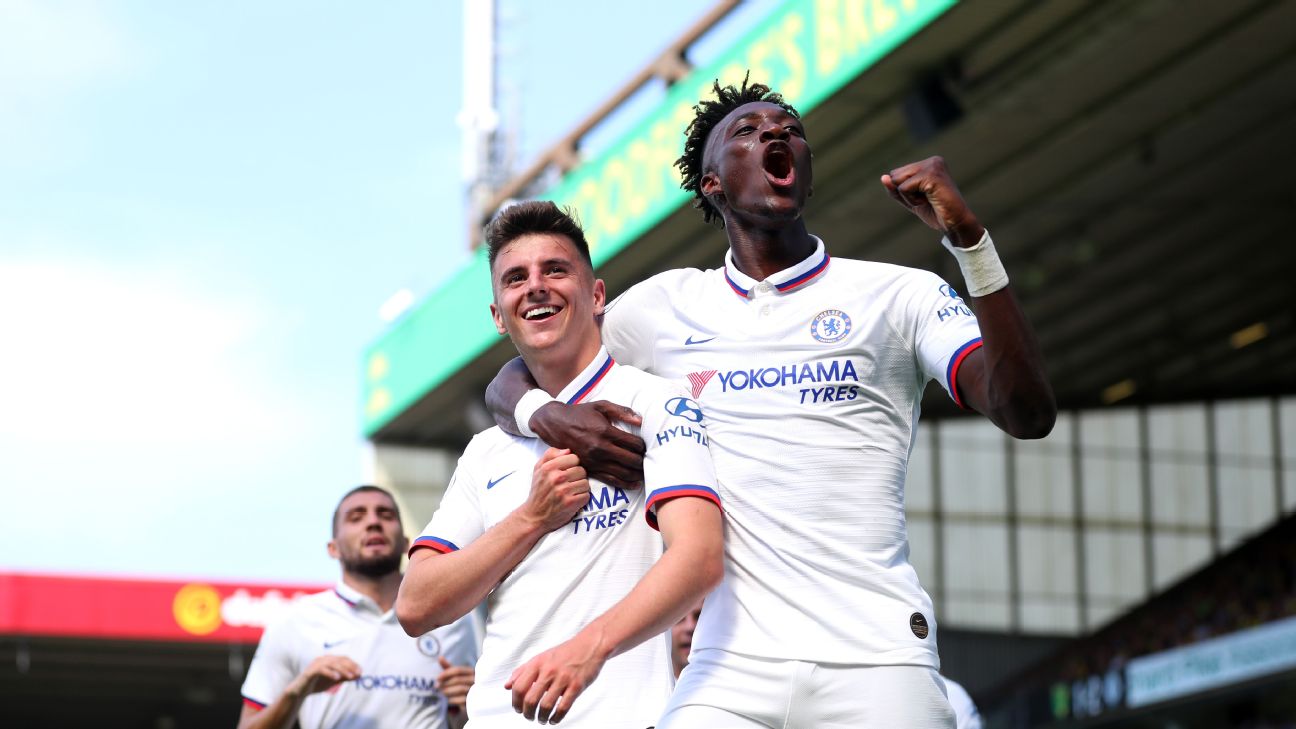 It will happen at some point this season, possibly as early as November. Chelsea will play a game with seven homegrown players in their starting XI. Thus far, we’ve seen four: Andreas Christensen and Fikayo Tomori at the back, Mason Mount in midfield, Tammy Abraham up front. With Mount doubtful for Sunday’s clash with Liverpool, we’ll probably see three but that is sure to change when Ruben Loftus-Cheek, Reece James and Callum Hudson-Odoi become available. (Loftus-Cheek is out until November, but the latter two have resumed training.)

Clubs so heavily reliant on Academy products aren’t exactly new. We all remember Pep Guardiola’s first Barcelona side, the one that further burnished the legend of their La Masia academy: Lionel Messi, Xavi, Andres Iniesta, Sergio Busquets, Carles Puyol, Gerard Pique, Pedro, Victor Valdes, etc. Plus, of course, Manchester United’s Class of ’92, with Ryan Giggs, David Beckham, Nicky Butt, Paul Scholes and the Nevilles. All were Academy products, except there’s a difference when it comes to Chelsea, one that makes this group potentially unprecedented, at least among bigger clubs in bigger leagues.

Apart from Christensen, who joined the club at 16, the other six all were in the Chelsea system from before the age of 10. That’s a hefty distinction.

– Robson: Why teams insist on playing out from the back
– ESPN’s Ultimate XI: Our team would win everything
– Johnson: How VAR has impacted every PL club

In many cases, when clubs boast about the players they “produce,” you should take it with a grain of salt. It’s one thing to take a kid at eight and nurture him all the way into the first team. It’s an entirely matter to cherry-pick talented 16-year-olds from other clubs, put them into your Academy for a year or two and then claim them as your own. One is a full-service, K-12 educational institution; the other is finishing school.

This isn’t to say that one is necessarily more virtuous than the other, just that the skill-sets involved are rather different. Guessing that an eight-year old might have the necessary athleticism, personality and coordination to become a professional footballer, and then giving him high-quality coaching and guidance for a decade is one thing. Acquiring, say, Paul Pogba and Raheem Sterling at 16, after they had played international football for their respective countries at the youth level, is quite another.

Chelsea are a prime example of this because over the years, they’ve done plenty of both. In fact, the reason they were hit by a transfer ban in the first place is linked to irregularities in signing youth players from other countries. (That ban, of course, has had a silver lining. While Frank Lampard insists the likes of Mount would be playing regardless this season, there’s little question that the inability to bring in players has created opportunities that weren’t there before.)

Except for certain specific situations, FIFA regulations stipulate that players under the age of 16 can’t move internationally. And because you can’t sign a binding contract until you’re 16 in most countries, raiding other clubs (especially abroad) for talent in the “magical window” just after a player turns 16 became a way of life. It still required scouting and contacts and fees (sometimes straight up, sometimes in the form of tribunal compensation) and there was often fierce competition, but almost everybody did it and Chelsea seemed to do it better than most. While they arguably never quite hit the jackpot in terms of acquiring a superstar who would then play many years in their first team, over the past five seasons along they netted in excess of $60m in transfer fees and loan fees from the likes of Nathan Ake, Gael Kakuta, Tomas Kalas and Lucas Piazon.

Yet even as they were doing that on an international level, they were pushing their ground game hard in their backyard: the sprawling London metropolitan area. At one point, Tomori, James, Loftus-Cheek, Hudson-Odoi, Abraham and Mount were all aged 12 or younger and all in Chelsea’s system. And it wasn’t just them. So too were Eddie Nketiah, an England Under-21 international, and Declan Rice, who has five England caps.

Nketiah and Rice were both released by Chelsea: the former is now at Leeds United, on loan from Arsenal, the latter is at West Ham. They’re evidence of how easy it is for clubs to get things wrong in deciding which youngsters to back and which to let go.

Where do players come from: Europe’s talent hotspots

Chelsea have 10 development centers that cover Under-7s and Under-8s. About 160 kids enter the system, usually by invitation. Each year they are whittled down and kids from elsewhere are invited to try out. It continues until they join the Academy at age 9 and, from there, there is the annual risk of being released until you sign a professional contract.

If it sounds rather dog-eat-dog, that’s because it is. There is a ton of competition for players to get into the system and there is an equal moment between clubs to attract players. Because while London may offer a huge catchment area of talent, Chelsea have to compete with the likes of Arsenal, Tottenham, West Ham, Queens Park Rangers and more for that same gifted kid.

Clearly though, Chelsea are doing it right at youth level. They’ve won the FA Youth Cup seven times in the past 10 seasons and the UEFA Youth League (aka the Champions League for kids) twice. The challenge has been ascending into the first team and that lack of pathway is something for which Chelsea has long been criticized in the past. It’s something the club have taken on the chin while pointing out that very few of the Academy graduates who they sold on would likely have had a major impact on the first team. (In that sense, they have a point. It’s not as if the Premier League is filled with Chelsea youth alums who have come back to haunt them. Most had the tools to be very good professionals, but not regulars at Chelsea.)

No more. The combination of the transfer ban and the return of Frank Lampard as manager (with Jody Morris — himself a Chelsea Academy product and former youth coach — as his assistant) has opened the door to throwing the youngsters in at the deep end. It’s working on many levels, not least the fact that it has bought the club time with fans and media.

The trickiest part is deciding whether it was a statistical quirk that so many gifted footballers gravitated to Chelsea before they learned their multiplication tables at some point between 2004 and 2008. And, of course, the classic nature vs. nurture debate: was it Chelsea that made them what they are or would they have reached the is level regardless? (Yes, obviously the answer is a bit of both, but the challenge is determining to what degree each contributed.)

Either way, the transfer ban is proving to have a massive silver lining for the club. And for that they can thank the work done over the past decade, both in assembling this group and in developing them from childhood through adolescence into adulthood.