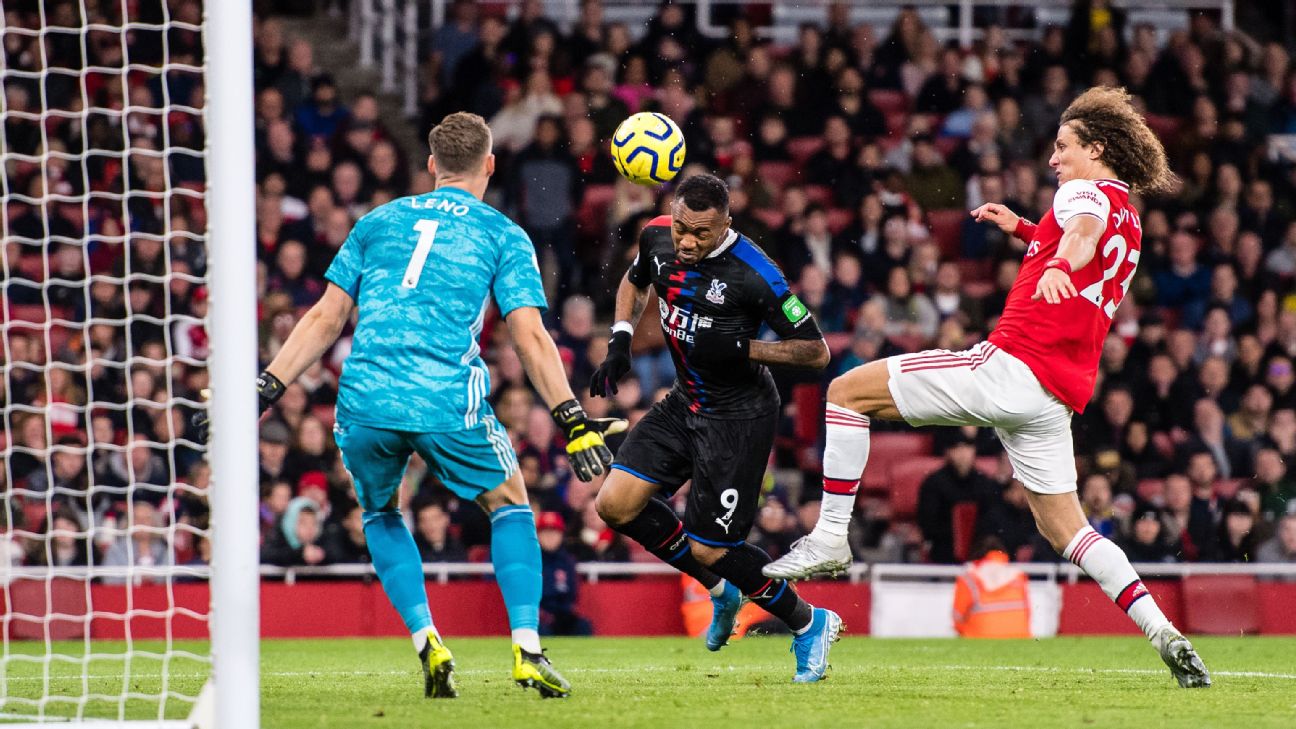 There were a few groans at the lack of imagination when Crystal Palace parted with STG2.5 million to take Jordan Ayew back to Selhurst Park permanently, but the Ghana international continued to silence the doubters with a second-half equaliser as the Eagles held Arsenal 2-2 at Emirates Stadium on Sunday.

The 28-year-old hasn’t had the best luck since moving to England with Aston Villa in 2015, being relegated twice — with the Villains and then with Swansea City.

It looked as though Ayew’s value as a Premier League player had diminished during a loan spell at Palace last term, in which he scored just once in 20 outings, and it wasn’t lost on some observers that the Eagles had improved significantly in 2019 after a reshuffle that left him on the sidelines.

However, Palace manager Roy Hodgson has been wholly vindicated in his decision to sign the attacker in on a permanent deal, with Ayew’s equaliser against Arsenal — heading home a chipped James McArthur cross — his fourth goal of the season. He now has four goals in his past eight Premier League outings, as many as he’d scored in his previous 34 matches in the competition.

For further context, Ayew’s best return in a league season since leaving Ligue 1 is seven goals (2015-16 and 2017-18), but he appears comfortably on course to better that tally this term.

While this was a miserable afternoon for the Gunners, with Granit Xhaka’s rift with Arsenal fans appearing to grow, Nicolas Pepe at least built on his two-goal showing against Vitoria Guimaraes in the Europa League on Thursday with a pair of fine corners in the space of nine minutes — the hosts scoring from both.

However, Wilfried Zaha, who so often raises his game for the highest-profile matches, stole the spotlight from his fellow Ivory Coast international, winning the penalty from which Palace began their comeback after being clipped in the box by Calum Chambers.

Referee Martin Atkinson initially accused Zaha of diving and booked the wideman, only for VAR to overturn the call, meaning that the yellow card was rescinded — the first time this has happened in the top flight.

As Arsenal sought a winner during an increasingly ill-tempered second half, there were to be no heroics from Pierre-Emerick Aubameyang, who failed to hit a shot on target and endured one of his least effective outings of the season.

In Sunday’s big match, Liverpool’s Sadio Mane and Mohamed Salah were the beneficiaries of the latest significant error from Serge Aurier, as the Spurs right-back brought down the Senegal forward in the box 15 minutes from time.

Salah duly stepped up from the spot to fire home the winner after Jordan Henderson’s 52nd-minute finish had cancelled out Harry Kane’s opener.

The fixture encapsulated the changing fortunes between these two sides since they contested the UEFA Champions League final in June, with Salah’s winner maintaining the Reds’ six-point lead over Manchester City after the latter’s 3-0 victory over Villa on Saturday.

Lys Mousset, meanwhile, capped off a week to remember when he equalised for Sheffield United at West Ham United, having scored the winner to down Arsenal at home on Monday.

The Franco-Senegalese forward has now scored as many goals (three) in his past seven league outings for the Blades as he did in his 58 showings for previous club Bournemouth.

In Spain, Ramon Azeez‘s Granada moved atop La Liga after their 1-0 victory over Real Betis, the Nigeria midfielder hitting the woodwork. The Nasrids will, however, drop into second place if Barcelona avoid defeat at home against Real Valladolid on Tuesday.

Ghanaian duo Thomas Partey and Mohammed Salisu each enjoyed a memorable weekend, the former playing 90 minutes in Atletico Madrid’s 2-0 victory over Athletic Bilbao, and the latter netting his first goal of the competition, a close-range effort from a corner, as Valladolid downed Eibar by the same scoreline.

“I was very happy, and I couldn’t believe it,” the young defender told his club’s official website. “I’d scored my first goal in La Liga, and it was a great feeling.

“When the ball came to me, I was sure that I’d scored. When the referee went to check the VAR, I was cool because I knew I wasn’t offside.”

In Italy, the top two dropped points in Serie A, with Juventus held at Lecce and Internationale failing to down Parma in Milan.

Yann Karamoh and Gervinho had given Parma the lead inside a dramatic first half hour in Lombardy, where Antonio Candreva opened the scoring for Inter on 23 minutes before the visitors responded twice inside four minutes. Romelu Lukaku salvaged a point for Inter six minutes after the restart, but they were unable to nab a winner to return to top spot.

Nicholas Opoku ‘s first-half sending off had dire consequences for Udinese, who had been comfortable — holding Atalanta 1-1 away — at the time of his 32nd-minute dismissal.

However, the visitors failed to cope with going down to 10 men, and Atalanta — bouncing back in style from their midweek Champions League defeat by Manchester City — were 3-1 up at half time before cruising to an emphatic 7-1 triumph.

Ivorian Christian Kouame scored his fourth goal of the season in Genoa’s 3-1 victory against Brescia, while Kevin Malcuit — who refused a call-up to the Morocco squad earlier this month — may now miss the rest of the season after tearing an ACL 70 minutes into Napoli’s 1-1 draw at SPAL.

In Germany, Salomon Kalou scored his first goal of the season in the Bundesliga, equalising for Hertha Berlin in the 69th minute as they came back from two goals down at home against Hoffenheim, only for the visitors to strike a 73rd-minute winner via Benjamin Hubner.

Belgo-Congolese wideman Dodi Lukebakio had scored the hosts’ first goal, taking his tally to two goals and two assists in his past four top flight outings.

In France, Paris Saint-Germain, without the injured Idrissa Gueye, romped to a thumping 4-0 Classique triumph over Olympique de Marseille.

Boubacar Kamara endured a miserable evening in the heart of OM’s backline, as they extended their winless league run against PSG to an agonising 16 matches.

The young centre-back later offered a perplexing excuse for his part in the defeat, and specifically for his responsibility in the opening goal, as Maruco Icardi met an Angel Di Maria cross to beat Steve Mandanda.

“It was an error on my behalf,” 19-year-old Kamara said, per RMC. “I think that I could have got to the ball, [but] I heard a small word, and that made me drop off.

“It’s up to me to learn from this error. It was hard, but I need to work so I don’t commit any more.”

For the first time this season, Nigeria’s Victor Osimhen failed to score in a home league game for LOSC Lille, and the 20-year-old was withdrawn in the 58th minute.

While there will be concerns that he has now gone four games in all competitions without scoring, Les Dogues still managed a 3-0 victory to move up to third.

M’Baye Niang and Max-Alain Gradel were among the goals as Stade Rennais defeated Toulouse 3-2, while Wahbi Khazri and Chadrac Akolo were also on the scoresheet as Saint-Etienne and Amiens shared the spoils in a 2-2 draw.