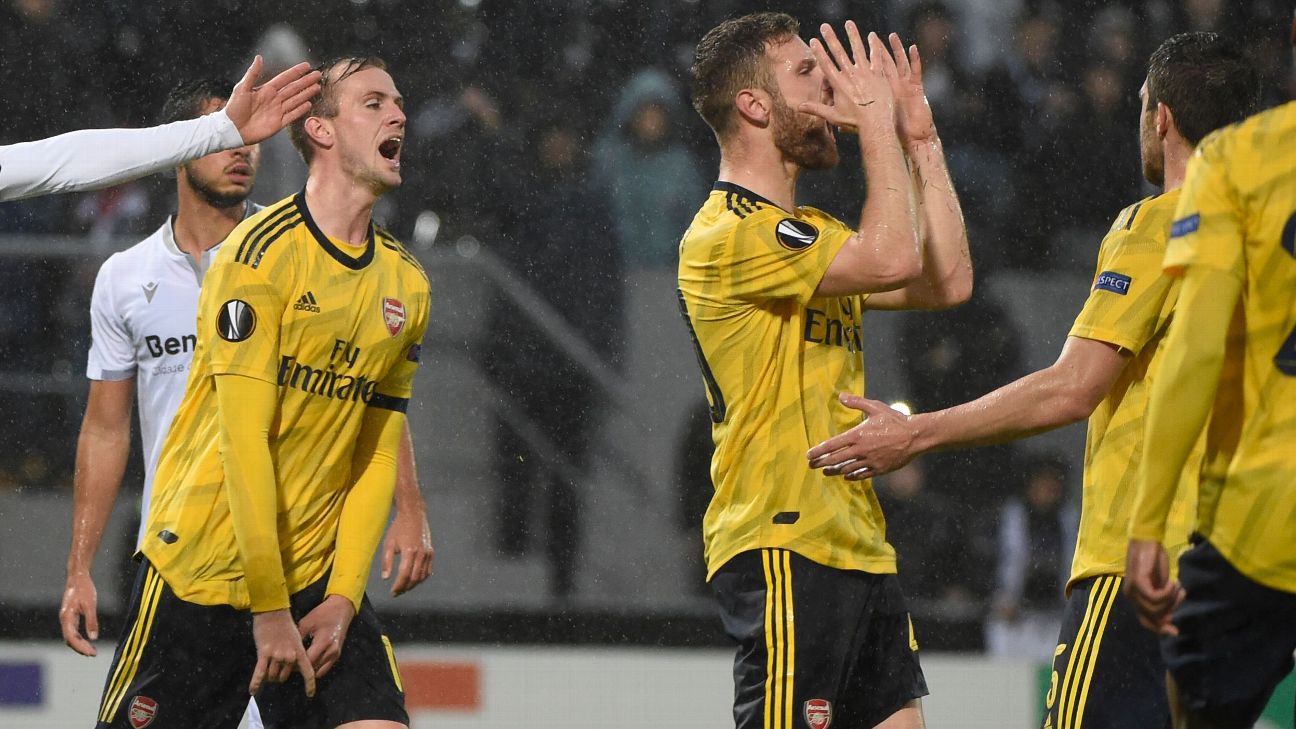 Arsenal were unable to keep alive their 100 percent record in this season’s Europa League as they had to settle for a 1-1 draw against Vitoria Guimaraes in Portugal. The Gunners were unable to find their feet for large periods of what proved to be an uneventful first half in wet conditions. Shkodran Mustafi was able to head his side into the lead with 10 minutes remaining, but Bruno Duarte popped up with an overhead kick in injury time to ensure the points were shared.

Arsenal had some nice ideas down the wing with strong overlapping runs, which was smart of them to utilise given who they had starting. Unai Emery’s men certainly maintained possession well and were able to calm the game down whenever it threatened to get too frantic, which, courtesy of Guimaraes’s persistence and physicality, was often.

The visitors were incredibly clumsy off the ball and constantly left gaps at the back for Guimaraes to expose. There was a distinct lack of communication throughout the spine that keeps getting worse, and for large periods of the game, their perceived attacking strength was much more of a weakness.

5 — Emery was attempting to expose the Portuguese side down the flanks, and while he had some early success with that, the boss recognised that it wasn’t sustainable across 90 minutes and changed the flow of the game in order to suit that — which, unfortunately, still didn’t really work. His initial team selection also raised a few eyebrows.

GK Emiliano Martinez, 7 — Looked composed from start to finish and never allowed Guimaraes to create too much chaos in and around the box. Made a few key saves, especially in the first half.

DF Shkodran Mustafi, 7 — Picked up another needless yellow card and continues to serve as one of the clumsiest players in European football. However, he slowly but surely grew in confidence as the game went on, and headed in the opener late in the contest.

DF Sokratis Papastathopoulos, 6 — Was lucky that he wasn’t tested more but came in handy on a few occasions with his last-ditch defensive style.

DF Rob Holding, 5 — Doesn’t really feel ready to be captain of this team, and ever since returning to the side has been unable to bring any composure with him. Did poorly for the equaliser.

DF Kieran Tierney, 6 — Many will question why he was played in the first place, but the Scot always looked lively and was the obvious reason as to why Guimaraes didn’t really opt to attack down the left until late on.

MF Dani Ceballos, 6 — Was swarmed in the middle as you’d expect but showed some passion by getting stuck in as and when was required. Dropped far too deep and was trying to do too much.

MF Ainsley Maitland-Niles, 5 — Lives up to the reputation of being a box-to-box defender, but he’s always one of the biggest sources of stress for Arsenal fans. Hangs a leg behind in challenges far too often and rarely has a strong final ball.

MF Joe Willock, 5 — Really struggled to create any openings or take the game by the scruff of the neck. Still has a long way to go before being viewed as a first-team regular.

FW Nicolas Pepe, 6 — Always seems to keep it simple but his moments of brilliance are few and far between. With that being said, he only needs one chance, and managed to curl in a lovely cross to assist Mustafi for the goal.

FW Gabriel Martinelli, 6 — Even when he’s not being found in space, Martinelli’s footwork always feels like a constant threat that can lead to opportunities for Arsenal.

FW Bukayo Saka, 5 — Nice positional play at times but never really seemed to do anything with it. The youngster has a great instinctive touch, but still feels like an incomplete forward.

MF Matteo Guendouzi, 6 — Showed both sides of his game by providing fresh legs and great vision in the first few minutes of his appearance before letting the work ethic slip.

FW Alexandre Lacazette, 6 — Didn’t get much of a sniff after coming on as his journey back to full fitness continues.

MF Lucas Torreira, N/R — Came on to give Arsenal a bit more grit and determination in the middle of the park, and did the job fairly well.