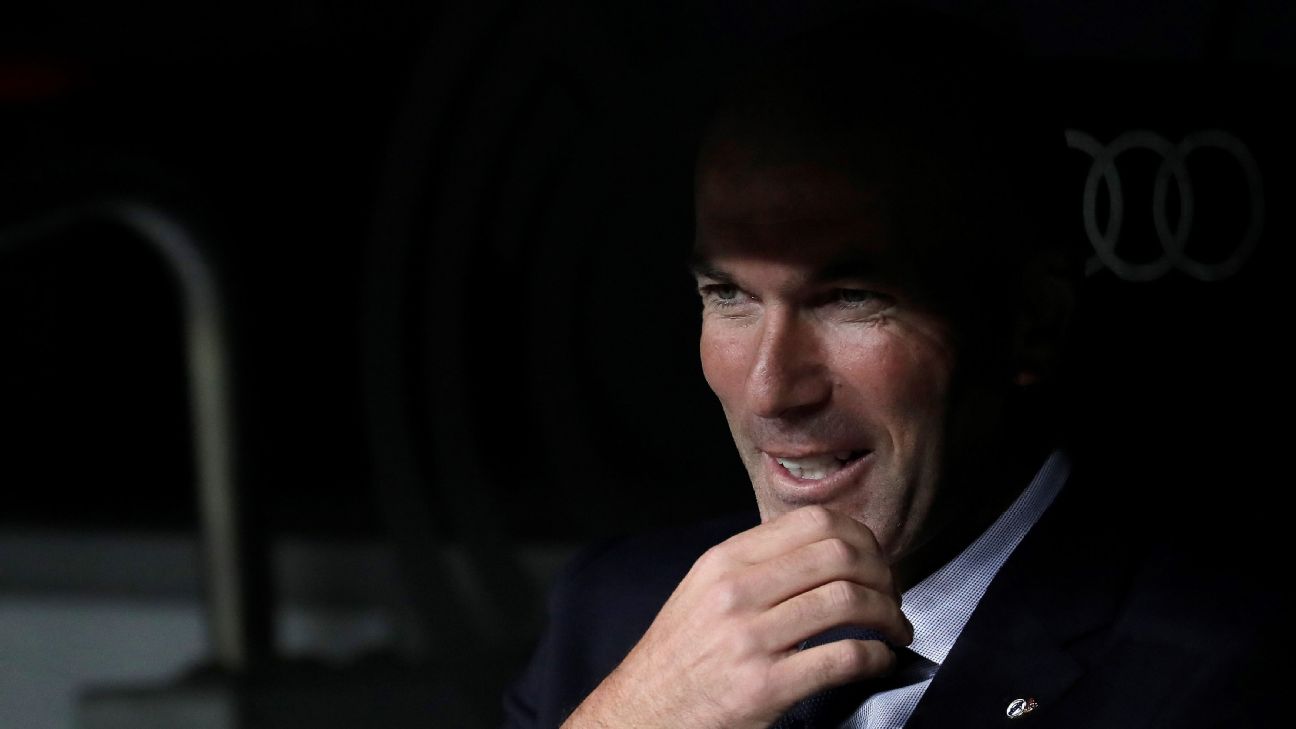 “Sack Zinedine Zidane!” Really? Sack him? Real Madrid should be preparing to promote him, and I’ll tell you precisely why.

The brutal prospect of Los Blancos getting rid of the legend who won them three straight Champions League titles, as recently as 2018, can be confronted not only because he was asked about it in his Monday news conference but because stranger things have happened. But I fervently believe that what lies in front of club president Florentino Perez is not the brink of the abyss, with salvation lying in a sacrificial (Zidane-shaped) offering to the football gods, but instead a massive opportunity. That would include promotion, not dismissal, for this Frenchman who has been nothing short of talismanic for Perez since they first met in Monte Carlo nearly two decades ago and fluttered eyelashes seductively at one another.

If Perez is even beginning to think that he made a mistake in persuading Zidane to come back after his mega-triumphant two-and-a-half-year reign, then I’ve some counsel for him. To begin with, only Miguel Munoz has coached Real Madrid to more trophies than Zidane in the club’s 117-year history. That wasn’t a fluke. Next, the last time in charge, Zidane had a win percentage that only two managers who’ve coached Madrid for more than 50 games since 1960 can beat: Carlo Ancelotti and Jose Mourinho.

If things aren’t working, Mr. President, try looking in the mirror — not drawing up severance papers for your coach. The things that traditionally make a jumpy president dismiss his trusted coach include fan unrest, poor results, important competitions out of reach and the availability of fresh talent with which to replace the manager.

Not one of the trophies available to them, including the revamped Spanish Super Cup, is out of Madrid’s reach. The results have been inconsistent, but there’s been sufficient quality, fight and victories to suggest that better, not worse, things are coming.

– ESPN La Liga fantasy: Sign up now!
– When does the transfer window reopen?
– Lowe: The real-life reasons why the Clasico was postponed
– Hunter: Mestalla can offer embattled Valencia salvation

I think the Bernabeu faithful are restless, but you’d barely have known that when Madrid went 3-0 up the last time at home, against Granada, nor when James Rodriguez got the fourth goal to seal things at 4-2. They saw good football, some terrific goals and, I think, hunkered down in acceptance that until all the key players are fit, regularly, then Madrid will be inconsistent.

As to available talent, I don’t think that this project would attract Massimiliano Allegri sufficiently to abandon his sabbatical — particularly with Perez having such an itchy trigger finger in recent months. Mourinho? Well, that, sadly, remains a possibility. A retrograde step in my opinion, and one that would inevitably draw Madrid into the kind of polemic “admire my dark arts” furore from which The Special Once draws energy.

Perez, I am 100 percent certain, retains affection for and belief in Mourinho. And it’s for that reason that Zidane was left admitting on Monday: “I’ve been here as player and coach for 18 years, and there’s going to be pressure. It’s the pressure that, here, there’s always going to be talk about ‘we’ve got to change coach!’ I don’t feel undervalued because the past is the past. Football forgets what you’ve achieved and that’s just life.

“I’m not going to say it doesn’t annoy me what people are saying but I can’t stop people having opinions. What I have to do is give my maximum. … I want to be in charge of Real Madrid for a long time. We know the situation, ask that question to someone else.”

The words of someone who knows that however unlikely it might seem, his future at Real Madrid is far from assured.

So, here’s my advice to Perez: Stick with Zidane, at all costs, until the end of the season. During the winter break, short as it is, sit down with him and ask him, on bended knee if necessary, to accept a promotion next June to become Real Madrid’s director of football.

Right now the squad is unbalanced — in terms of quality, age, experience, athleticism and hunger. There’s enough quality to win a trophy or trophies this season and there’s loads of budding promise in the shape of Vinicius, Rodrygo, Brahim Diaz and, potentially, Ferland Mendy and Eder Militao. But the squad, which is too large, shows evidence of insufficient planning and execution — the jobs a director of football excels at. The best planning Madrid have achieved in recent years was when Zidane was either officially the director of football or acting unofficially in that role.

It’s time the club asked him to return to that position. In fact, it’s time to make comparisons with Barcelona back in 2008.

The Frank Rijkaard era was patently ending and the Camp Nou board, with brilliant advice from Johan Cruyff and Txiki Begiristain, opted to be creative, daring and aggressive. They appointed Pep Guardiola who, for all his subsequent success, was neither the obvious choice — in fact he pipped Mourinho to the job — nor heralded as a guaranteed success at the time. Many thought it to be a rather desperate move.

Right now, a part of the opportunity that is glaringly obvious in front of Perez is that he opts for Madrid’s own Guardiola.

He has two clear candidates, neither of whom should be appointed before the end of the season, but each of whom should already have been monitored under a giant microscope for several months now. Those Guardiola-esque candidates are Xabi Alonso and Raul. Two club legends, both with months of youth coaching under their belts (Guardiola had had one season) and each man brims with personality, communicative powers, authority, club sentiment, youth, energy and each is a stone-cold winner.

No, you’re quite right, they won’t be Guardiola Mk II, but they are equipped to replicate the effect he had at Camp Nou. What’s required is a presidentially authorised but Zidane-directed clearout of certain players who, whatever their past, need to find new pastures to make way for urgent, modern, hungry and aggressive new players. “New” in terms of those on the fringes right now and some brought in to compensate for specific areas that are presently lacking.

Raul’s advantage is that he’s in the club right now, which makes him easy to study intently, cost-free to promote and he’s still more of a club icon than Alonso.

Alonso’s advantages include the fact that he’s more widely experienced than Raul in terms of who he’s worked under, which football cultures he’s worked in. I think it’s to his benefit that he’s vaulted up the ladder by moving out of Real Madrid to Real Sociedad in order to coach B-team football more quickly. And I strongly believe that Liverpool will be tempted to pit him against Steven Gerrard when, and if, Jurgen Klopp takes that football sabbatical to travel the world with his wife that he’s talked about recently. Oh, and Alonso can bring the stunningly good Martin Odegaard back with him. That alone would be a massive boost for Madrid’s hot-and-cold midfield.

All in all, it means that there’s overwhelming evidence to ignore the siren voices suggesting that Zidane is on borrowed time. There’s overwhelming evidence that, by June, Perez can have a brilliant director of football, maintaining Zidane as a resource at the club, and one of two young tyros as his Guardiola equivalent. That pair can then oversee a major overhaul of the squad that, if handled well, can net the club a profit. These are moves that can win them both fans and trophies.

Over to you, Mr. President.