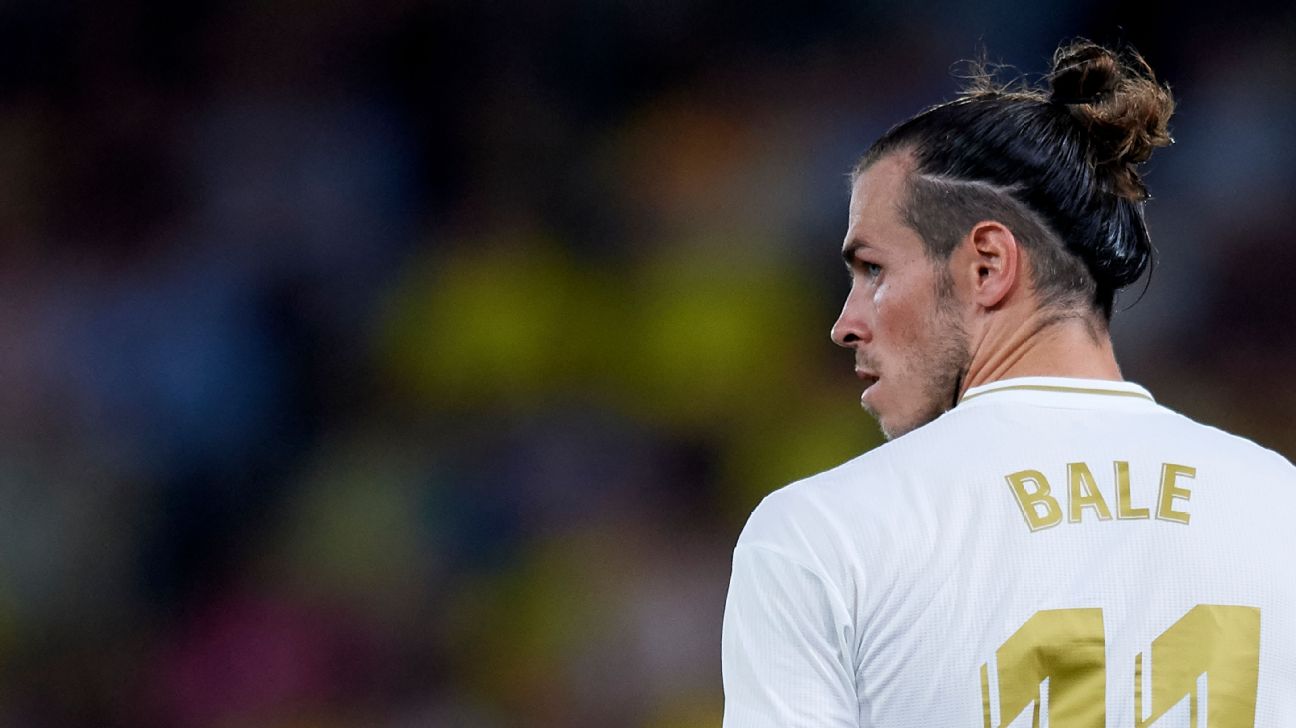 Oh yes you will.

It was Friday lunchtime at Valdebebas, Real Madrid‘s training ground out near Barajas airport, and they had only just started. La Liga and club football were back, which meant that the pre-match news conference was back. It also meant that Zidane was back. Above all, it meant that Gareth Bale was back, and the news conference was all about him. Well, almost. Bale and that flag. You know the one by now: “Wales. Golf. Madrid. In that order.”

By the way, at least Madrid are on the list of priorities. Where were his wife and kids?

The first question was about Bale. (He’s in the squad this weekend to face Real Sociedad.) The second question was about Bale and despite Zidane answering that one a little pointedly, so was the third. Jose Mourinho made a brief appearance before Zidane was asked if he would only ever manage Real Madrid in Spain — “yes, I’m white,” he said — before Bale was back again. Question six was on him; so were questions seven and eight.

It became almost a running joke. Another one. Apologies were offered before questions were asked, but no one had any intention of not asking them.

“There have been six questions on Bale so far,” someone opened a few minutes later. Six of eight. Make that seven. Of 10. Ah, wait. Eight. And that was just he ones that were asked: from Britain they’d come — Valdebebas is handy from the airport at least — but from Britain they wouldn’t be heard. And nor was it just Friday.

“There have been eight questions about Bale today…” another began. Nine, now. “… Before Galatasaray, it was seven of the 13. It was 11 of 16 before Leganes,” the question continued, taking it to nine of 15 here. “Is he making it too easy for us?” A lot of it has been too easy, that’s for sure.

“He thinks it’s too much,” Zidane said. And Zidane felt the same way. There had been “a lot of noise,” he said.

On one level, it’s pretty silly. Bale likes golf: what a monster! As crimes go it’s pretty heinous, you’ll agree, and it’s become an obsession, occupying far too many minds in the media, seemingly incapable of resisting teeing up the obvious punchline and taking a swing at him. See? Anyway, “Bale [gets stuck] in the hole,” ran the headline of AS on Thursday.

Writing in El Pais, Rafa Cabeleira summed up the essential absurdity of some of it. “Football is so merciless that protagonists are not allowed the slightest glimmer of humanity, the tiniest slither of anything that makes them like mere mortals,” he writes. “Gareth Bale knows that well: a football player who has lifted four Champions League trophies with Real Madrid and who, it seems, likes to play golf in his spare time. Guess which of those two things has become of central importance when it comes to judging him, and which is reduced to mere anecdote?”

Maybe it is something probably best laughed at. Bale had said that he found the “Wales, golf, Madrid” chant “hilarious”; his teammates laughed about it, he said. The flag was a joke, prompted by remarks made by former Madrid striker Predrag Mijatovic about the Welshman’s supposed priorities and poking fun at a perceived media agenda against him. His teammates have long called him “The Golfer.” When AS underlined a trio of concerns that Madrid supposedly had over him, they headlined it “triple bogey”; “I’ve never had one of them in my life,” Bale joked, and in Wales they fell about. Back in Spain during training on Friday, when he messed up a pass, teammate Mariano performed a golf swing. Bale grinned and a lot of people laughed.

A lot of people didn’t, though. The more that some don’t laugh, the more their knickers get in a twist, maybe the funnier it is. It might have been blown out of proportion, and that was Zidane’s line on Friday.

“It’s too much already,” he repeated, noting: “He just wants to play and he doesn’t like the fact that we’re talking about this; he thinks it’s too much.” Zidane also tried to suggest that this was nothing to do with him — a thing that people were banging on about out there, not in here. “Outside, there are a lot of comments and I’m not here for that,” he said. “I’m not interested, I know a lot of people are, but I’m not … we can’t control what goes on outside.”

But there is more to it than that, and nor is this some extraneous issue beyond anyone’s control. While it was a joke, while it is someone else’s flag Bale stood behind, the visual stung. Many a true word said in jest, they say. And while it was aimed at the press, it would be naive not to see the club there too. It is a reality that Bale is not happy with them, that he does not exactly feel forgiveness towards Zidane and the board. He remembers the whistles and jeers. He knows that Zidane wanted him gone — “it is pretty clear what I am doing,” the Frenchman said at the end of last season; “if he goes tomorrow, so much the better,” he said this summer — and he knows that in July and August no one defended him. And yet when it came to it, they didn’t let him go either.

Something broke then — had been broken before, in fact — and that’s part of the context here: he has nothing left to lose. Nothing really changed, and it doesn’t really now: this may deepen divisions with some (although for others it’s largely meaningless) but it does not create them. Bale was offered a second chance, starting the opening game of the season, but didn’t really see it like that. It wasn’t some deep shift, just an adjustment for circumstance, but if he’d been able to grasp it, it might have changed things. And yes, this poked fun at the media, but there was a hint of “up yours” directed elsewhere, too. There was a sense of defiance there, too. If he felt that they didn’t respect him — and rightly or wrongly, he did — where’s the obligation for him to respect them?

Meanwhile, the reaction of those who took offence at this flag also reacted within a context of their own: all those questions about commitment; the injuries (he has missed 91 games at Madrid); the status; and, yeah, yeah, the bloody golf. This is not just a flag, it’s what is symbolises, what that message means. His past four games of football have all been for Wales. He’s been out for a month for Madrid. He went on one international break and then another. In between times, he didn’t play for Madrid. Some think he shouldn’t again. Now he is back, ready to play, fit again, but some went so far as to call for him to be kicked out of the club forever. Marca’s cover called him “Disrespectful. Mistaken. Ungrateful. In that order.” AS demanded he gets “out, out, out.”

The only real, lasting solution is a departure — or perhaps a change of manager and/or attitude? — but nothing has really changed there either. What does change might be how he is remembered, his legacy, and that’s the sad thing, and it is baffling how little that seems to matter, how entrenched and cold this has become. In terms of the situation now, departure was already the solution. And it’s not so easy to do. They tried in the summer, thought they had an agreement, but it broke down. Where does he go? Who pays his transfer fee? Who pays the wages? Who backs down? Put bluntly, most clubs can’t afford him. He has little intention of returning to the Premier League and no intention of taking a step backwards financially. China was the way out, but Madrid closed that door when he was halfway through it. In the summer they will try again; in the winter they might too, but it is harder, they know.

And so he might as well play. He is, after all, very good at this. And so, everyone gets on with it, tries to make the best of the situation until a definitive solution presents itself. Because there is not a lot else they can do. Punishing him is probably counterproductive — and may, if they think about it, be left for the fans to do — and ditching him certainly would be. So there may not be much joy, the warmth that could make it special, but there may be minutes.

Zidane said he would use him, insisted he was happy and said the only problem was that other stick with which he gets beaten: language. He said there was too much noise, but nor was his a particularly spirited defence on Friday. For all those questions, all those opportunities, there wasn’t a grand gesture. Instead it was dealt with efficiently enough but not much else. It was cold, not committal, designed to move on.

His conversation with Bale, he said, was like the ones he has with any player: say hello, talk about the game. Asked if Bale will leave, he said he didn’t know that either: “what matters is that he is with us now.” Asked if Bale was a starter, he said he would be useful. And asked if Bale had disrespected Madrid, mocked the club, he said: “I don’t know,” insisting it wasn’t for him to say.

There was no “it was a joke, you daft idiots”; no “come on, now, leave it out”; no “look, he was injured”; no “Gareth always gives everything when he plays for us”; no “injuries hurt him more than anyone else, you know.” In fact, some of those doubts were left lingering there. And, Zidane will feel, why should there have been? Neither of these men is going to fight, and neither is going to come out fighting on the other’s behalf, that’s for sure. They’ll just live with it, maybe not even as best they can. But that can work, perhaps. For a while.

As strong as it got was when Zidane, aware of how supporters might react on Saturday, knowing that Bale could well find himself whistled and booed, said: “If you look at what he has done for the club, those who come to the stadium, who feel our colours, know he is on our team and there’s no point in looking beyond that. The fans are with us always, and he is with us, so I will always be with him.”

“There has been too much noise,” Zidane said. On Saturday, when Bale returns to the Bernabeu, there may be more.