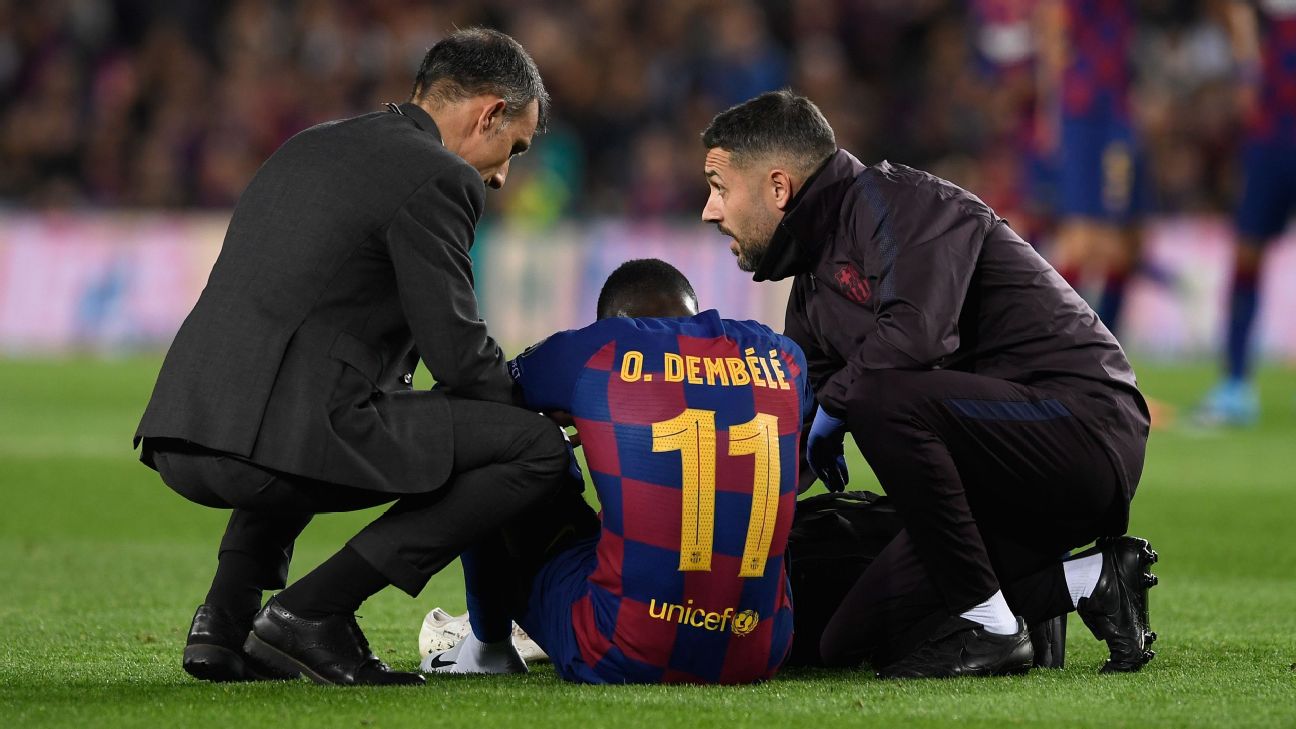 Dembele left the pitch in tears on Wednesday after 25 minutes of Barca’s 3-1 win over his former side Borussia Dortmund in the Champions League.

Barca have since confirmed that he was taken off with a thigh strain and that he will have to undergo further tests to determine how serious the problem is. It’s the ninth injury he has picked up since he joined the club for an initial €105 million in 2017.

“The doctors have to try and find a solution to his injuries,” Suarez told reporters. “[They have to find out] how he keeps getting injured after he has recovered. We hope he’s back with us soon.”

Dembele injured his thigh while challenging for the ball in the air. He fell to the ground immediately, removing his boots and throwing them in frustration at the thought of missing more games.

The France forward has already sat out six games this season through injury and was suspended for another two after being sent off against Sevilla.

He was able to leave the pitch on foot in the end, though, despite the presence of a stretcher, although he looked distraught as he headed down the tunnel.

“It’s a shame because [Dembele] always tries to be fresh for every game,” Barca defender Clement Lenglet said. “He was looking forward to playing against his old team and he left the pitch crying because he has football in his heart. When you can’t play, you feel it.”

Barca recovered from the loss of Dembele to book their place in the last 16 of the Champions League as group winners. Lionel Messi, Luis Suarez and Antoine Griezmann were all on target, with Jadon Sancho adding a late consolation for Dortmund.

Griezmann played especially well after coming on for Dembele. The former Atletico Madrid forward linked with Messi several times and Lenglet said his performance should put to bed rumours that he doesn’t get on with the Argentine.

“It was a good moment for [Griezmann] to score because it meant all three of the forwards were on target,” Lenglet said. “And Messi gave him the assist, so now the rumours can stop, you can’t say anything [about their relationship].

“Antoine was spectacular when he came on and he had more than once chance. We’re here to support him and to help him integrate as quickly as possible. And he’s here to help us.”