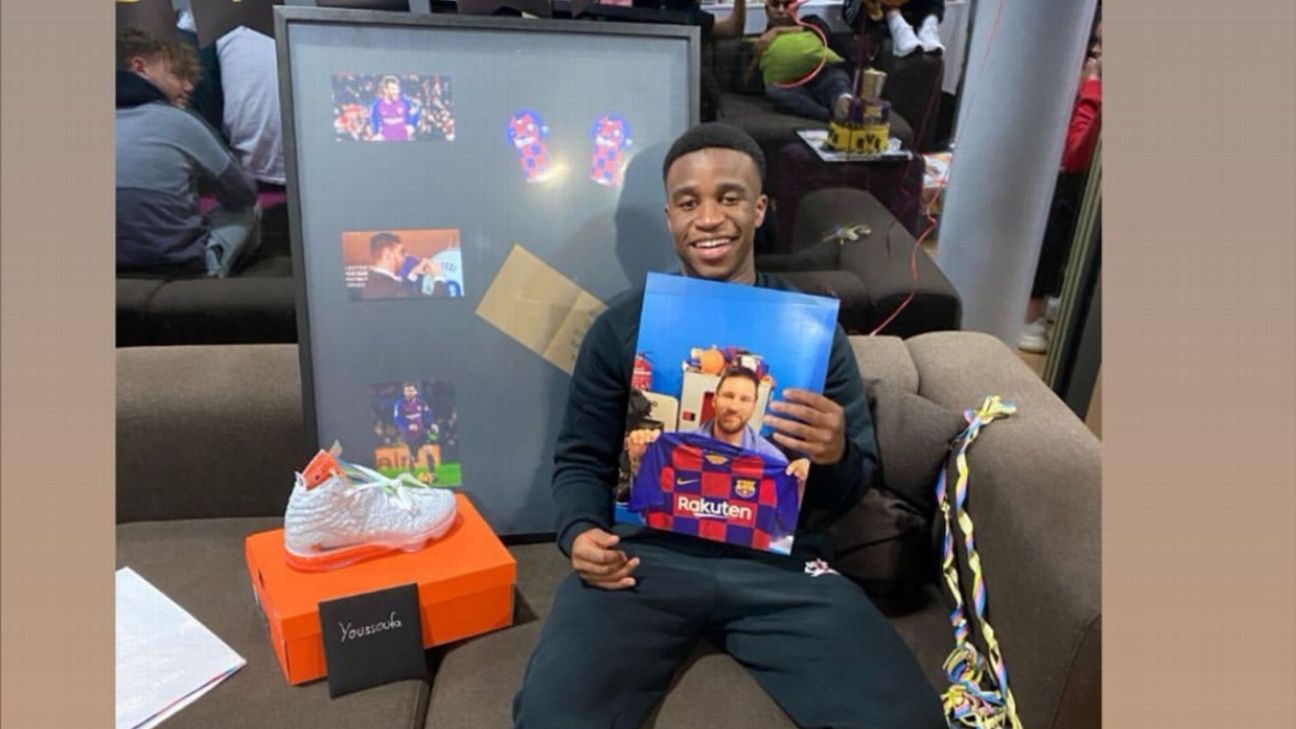 Borussia Dortmund wunderkind Youssoufa Moukoko received a very special birthday gift this week from none other than Lionel Messi.

Moukoko turned 15 on Wednesday and was astonished to find a personalised token from the Barcelona superstar waiting for him at the Dortmund training ground.

“Oh my god! Got this as a gift from my idol. Many thanks, Leo Messi. Thanks for all your birthday wishes,” the teenage prodigy said in his post on Instagram. 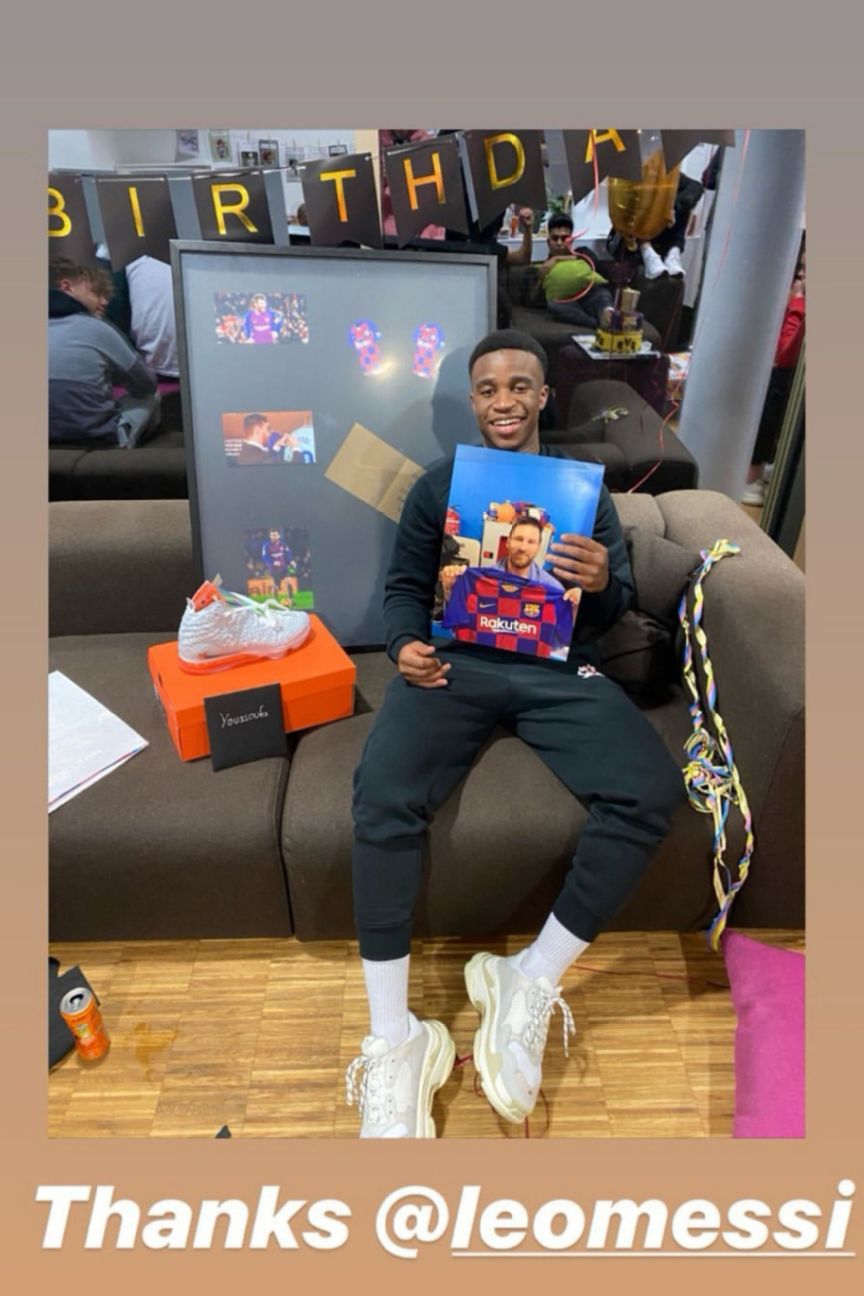 Moukoko, who regularly cites Messi as his role model, has seen his profile rise considerably over the past year or so and is currently averaging a goal every 54 minutes (18 goals in 11 appearances) in this Bundesliga U19 season, including a haul of six in one game.

He also scored 40 goals for Dortmund’s U17 side in his debut season, playing his first game for them at the age of 12 (Twelve!), and is the youngest player ever to score in the UEFA Youth League.

In short, Moukoko is one of the most exciting young talents in world football, and clearly Messi has marked him out for greatness. Maybe the 32-year-old is eager to play alongside him at the Camp Nou before he hangs up his boots? Watch this space…

Stephan Uersfeld contributed to this report

Christian Pulisic links up with Esports star Ninja in London

Had the pleasure of meeting @cpulisic_10 tonight and having dinner. What an incredible dude, keep killing it brother. And we are definitely getting some Fortnite games in man. pic.twitter.com/7Wh8fZTSGc

Esports star Ninja has had a busy week, first meeting David Beckham at a launch event in London before having dinner with Chelsea star Christian Pulisic.

The blue-haired gamer bumped into Pulisic at a London restaurant on Wednesday evening after previously helping Beckham to open the new Adidas flagship store in Oxford Street earlier in the day.

“Had the pleasure of meeting Christian Pulisic tonight and having dinner,” Ninja wrote on Twitter.

“What an incredible dude, keep killing it brother. And we are definitely getting some Fortnite games in man.”

As part of a new warts-and-all documentary series, Barcelona are keen for their fans to relive the night they forfeited a three-goal advantage against Liverpool in the semifinals of last season’s Champions League.

After winning the first leg 3-0 at home, the Spanish giants capitulated at Anfield, losing 4-0 and putting Gerard Pique‘s wife and kids through the emotional ringer in the process.

The Colombian pop star must have been a trembling mess by the time Trent Alexander-Arnold whipped his quick corner into Divock Origi at the near post.

Probably one for the more masochistic element of the Blaugrana support.

🤔 Alan: “Would you move into football management one day?”

We’d love to see Eddie at #Arsenal and see what he does with Ozil 🤣 pic.twitter.com/tblwV4peo9

Unai Emery might need to keep a close eye on Eddie Jones because the England rugby coach has revealed his is keen on taking the Spaniard’s place in the Arsenal dugout.

Speaking on Talksport, Jones was asked if he’s ever contemplated making the jump from rugby to football, and it just so happens that he is keen on one particular Premier League job.

“I’d love to coach Arsenal!,” Jones replied. “How much fun would that be?”

The Australian went on to explain that he fell in love with the north London rivalry while living locally.

Not that we’re getting ahead of ourselves here, but it’s only a short(ish) hop across the city from Twickenham to the Emirates Stadium.

Anybody watching the midweek cup tie between Taunton Town and Truro City certainly got their value for money after the game was settled by an epic and record-equalling penalty shootout.

The Southern League Challenge Cup second round match ended 2-2 after extra-time before requiring 34 spot kicks to decide the winner.

Taunton finally emerged victorious but only after the two sides matched the previous record for penalties taken in an English football match, set during the EFL Trophy match between Chelsea U23 and Oxford United in 2016.

After 34 minutes of shootout shenanigans, Jack Rice was the man who sealed a 12-11 sudden-death win for Taunton by scoring their 17th penalty of the night.