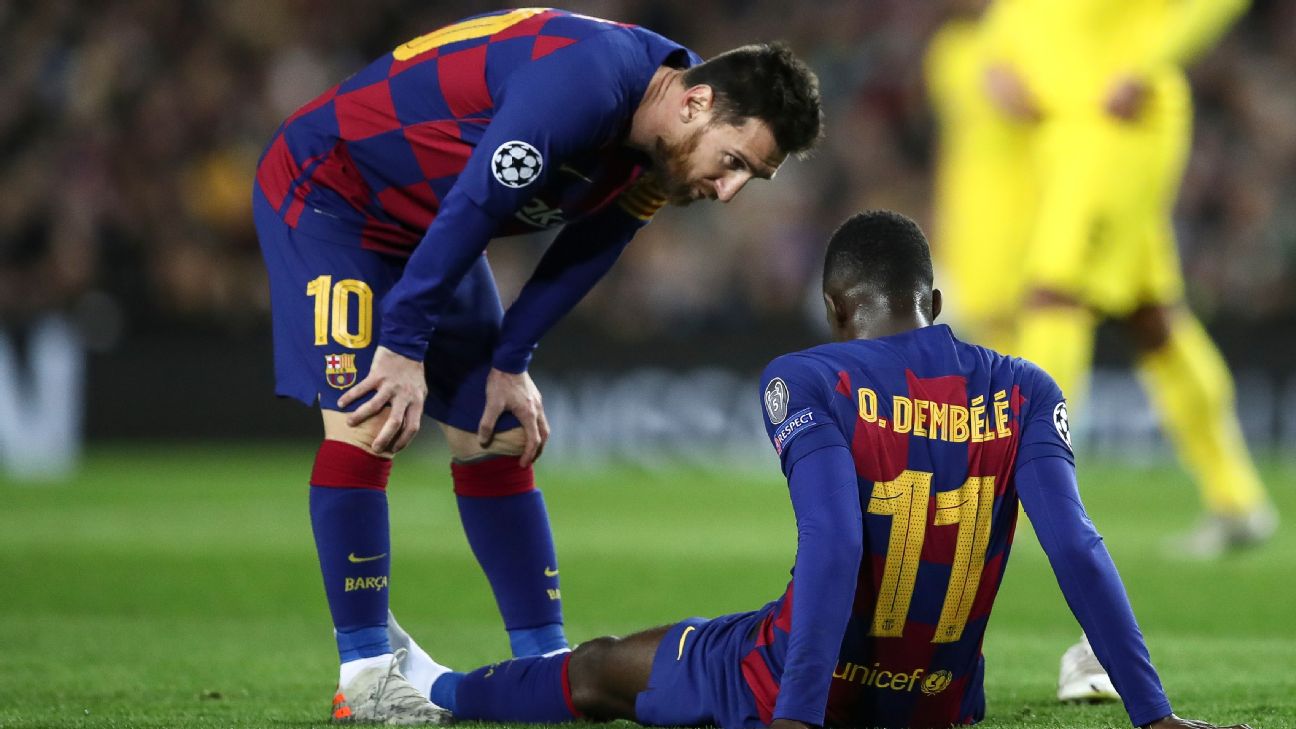 Barcelona forward Ousmane Dembele will be out of action until 2020, with the club confirming he’ll be out for at least 10 weeks with a right thigh injury.

Dembele, 22, injured his thigh in Wednesday’s Champions League win over Borussia Dortmund after 25 minutes, and was replaced by Antoine Griezmann.

The injury timeline means that the France international will miss critical league games against Real Madrid and Atletico Madrid, as well as January’s Spanish Super Cup in Saudi Arabia.

Sources have told ESPN FC there is major concern at Barca about Dembele’s repeated muscle problems after the forward suffered his ninth injury since joining the club.

The sources add that the club are “worried” about the frequency of Dembele’s fitness issues and also about how he deals with this latest setback mentally.

He was visibly affected when he exited the game against Dortmund, crying as he headed down the tunnel. The club feel he could be suffering from emotional stress following so many injuries, which as a result affects his muscles. Given the explosiveness and pace with which he plays, that could be one explanation for such frequent injuries.

After the Dortmund game, teammate Luis Suarez called for the club “to find a solution” to the problems and Barca are now working closely with his agent, Moussa Sissoko, to heed that advice.

The Spanish champions paid an initial fee of €105 million to sign him from Dortmund in 2017 after Neymar moved to Paris Saint-Germain. Since then, he has missed eight-and-a-half months of football and 55 games through various injuries.

He has already sat out six matches due to two different injuries this season. The first injury came against Athletic Bilbao in August. Dembele felt something during the match but went against the medical team’s advice to undergo tests, believing it to be nothing serious. He returned to training three days later after spending the weekend in France to discover he would be out for five weeks.

However, while that irked some at the club, Dembele’s professionalism has greatly improved. In the past he has been heavily fined for being late for training sessions, team meetings and matches. Defender Gerard Pique warned him that he must learn “football lasts for 24 hours of the day” to succeed among the elite.

Sources say those discipline problems have been left behind, though, and he’s living a life much more fitting of a top-level footballer. It’s for that reason there’s so much concern that he’s still continuing to pick up injuries.

“His attitude has been really positive and he’s one of the most loved players in the squad,” a source inside the dressing room told ESPN FC. “He’s a joker, he’s happy and we hope this injury doesn’t set him back.”