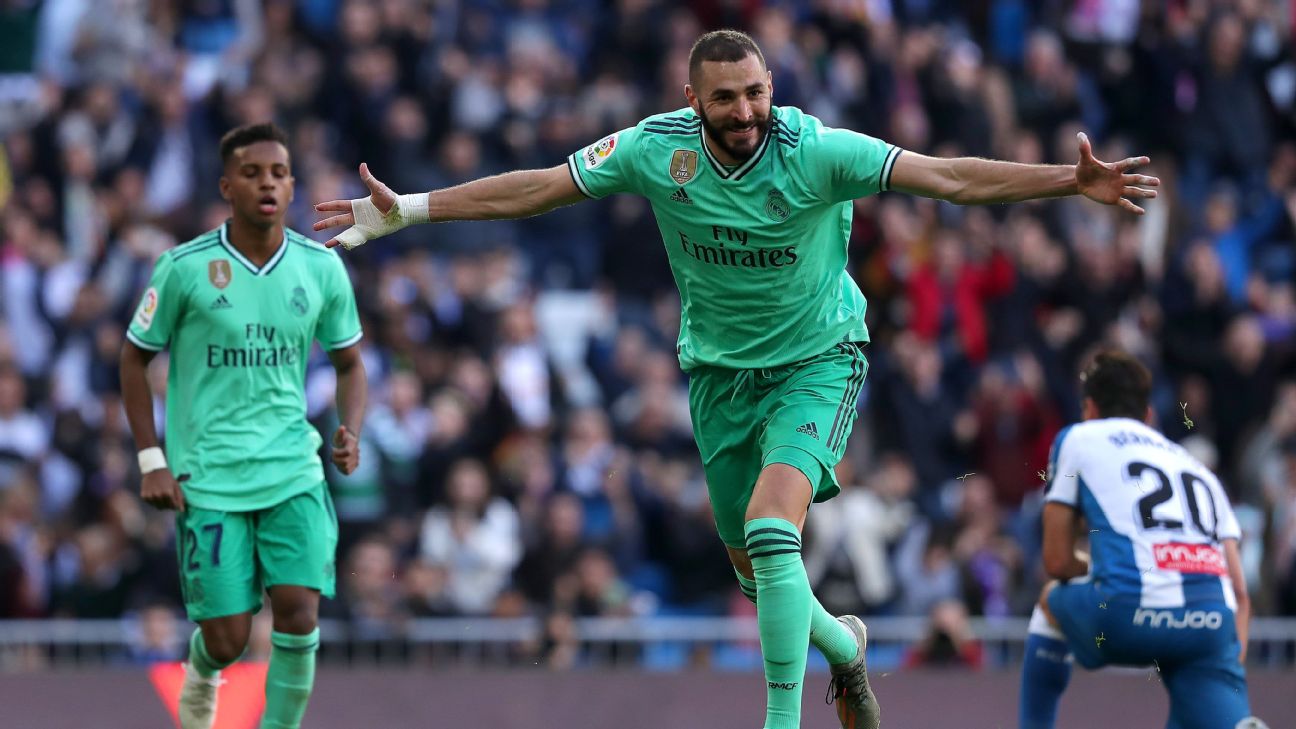 Goals from Raphael Varane and Karim Benzema gave Real Madrid a 2-0 win over a poor Espanyol side on Saturday to keep the pressure on Barcelona at the top of the La Liga table.

Vinicius Junior impressed in his first start since October, the teenager being denied three times by former Madrid keeper Diego Lopez in the first half. It was centre-back Varane who eventually opened the scoring, staying upfield after a corner and slotting the ball past Lopez.

In the second half there were more Real Madrid chances, with Benzema eventually converting Federico Valverde’s cross with just over 10 minutes remaining for his 11th league goal this season. Ferland Mendy’s sending off came too late to cause Madrid any problems.

Madrid dominated throughout and never looked threatened by a team that haven’t won at the Bernabeu since 1996. They were expected to beat a side that sits second bottom with just one win in 11 games, and they got the job done. The performance of Vinicius was a highlight. The Brazilian forward knew he had to make the most of a rare start and took full advantage, although his end product remains a concern.

The game started slowly and drifted for long spells. It was one-way traffic against a desperately limited Espanyol and with more clinical finishing, Real Madrid could have turned this into a rout. On too many occasions they were kept at bay by Lopez and until Benzema’s goal that left them exposed to the possibility of an unlikely equaliser.

7 — Zinedine Zidane made six changes to the team that won at Alaves last weekend. The manager’s discourse that every member of his squad is important rings true on days like this. Eden Hazard, Gareth Bale and Marcelo were absent but they weren’t needed against this calibre of opposition. Zidane’s selection of youngsters Vinicius and Rodrygo gave the Bernabeu crowd something to get excited about.

GK Thibaut Courtois, 7 — Returning to the team after being rested, he remains the clear first choice ahead of Alphonse Areola. Had little to do, but made one exceptional first-half save from Esteban Granero’s header.

DF Dani Carvajal, 7 — Followed up a goal-scoring performance away at Alaves with a solid display at the Bernabeu. Most of Real Madrid’s attacking play came down the opposite flank.

DF Sergio Ramos, 7 — A quiet afternoon for the Real Madrid captain as Espanyol offered little in attack. Alert to the occasional counterattack, he was called into action in the second half to block Wu Lei’s shot.

DF Raphael Varane, 8 — An unexpected source of Madrid’s opening goal, he finished surprisingly well when played in by Benzema, tucking the ball past Lopez with his left foot.

DF Ferland Mendy, 6 — Looks a mostly reliable backup for Marcelo, but must improve in the final third. Mendy’s pace gets him into promising positions but doesn’t always take full advantage. Picked up two yellow cards, which saw him sent off late on.

MF Casemiro, 7 — Made one crucial intervention just after half time, a perfectly-timed tackle denying Sergi Darder who was clean through on goal. Otherwise had little defensive work to do.

MF Federico Valverde, 8 — A surprising omission in last week’s win at Alaves, Valverde’s tireless box-to-box running has already made him a fan favourite. Right now Madrid look a better team with him in the midfield. Provided the assist for Benzema’s goal.

MF Toni Kroos, 7 — An assured midfield performance. Kroos enjoys being partnered by Casemiro and Valverde as he can focus on dictating play. Taken off for a rest after 70 minutes.

FW Vinicius Junior, 8 — Desperate to make an impression having been left out of the squad entirely in recent weeks. Hazard’s ankle fracture means his preferred left-wing slot is up for grabs. The 19-year-old could have had a first-half hat trick, but still looks nervous when in on goal and needs to improve his decision-making. Went off to an ovation.

FW Rodrygo, 6 — Playing on the right, the 18-year-old caught the eye less than his compatriot. Rodrygo has made a real impact at times this season, but his youth and inexperience mean he has a habit of going missing in games too.

FW Karim Benzema, 8 — La Liga’s top scorer had an initially frustrating afternoon in front of goal, failing to capitalise on a couple of decent chances before finally scoring late on to secure the three points.

DF Eder Militao, N/R — Brought on to shore up the defence after Mendy’s sending off.

FW Brahim Diaz, N/R — Replaced Rodrygo late on and had little time to make an impact.