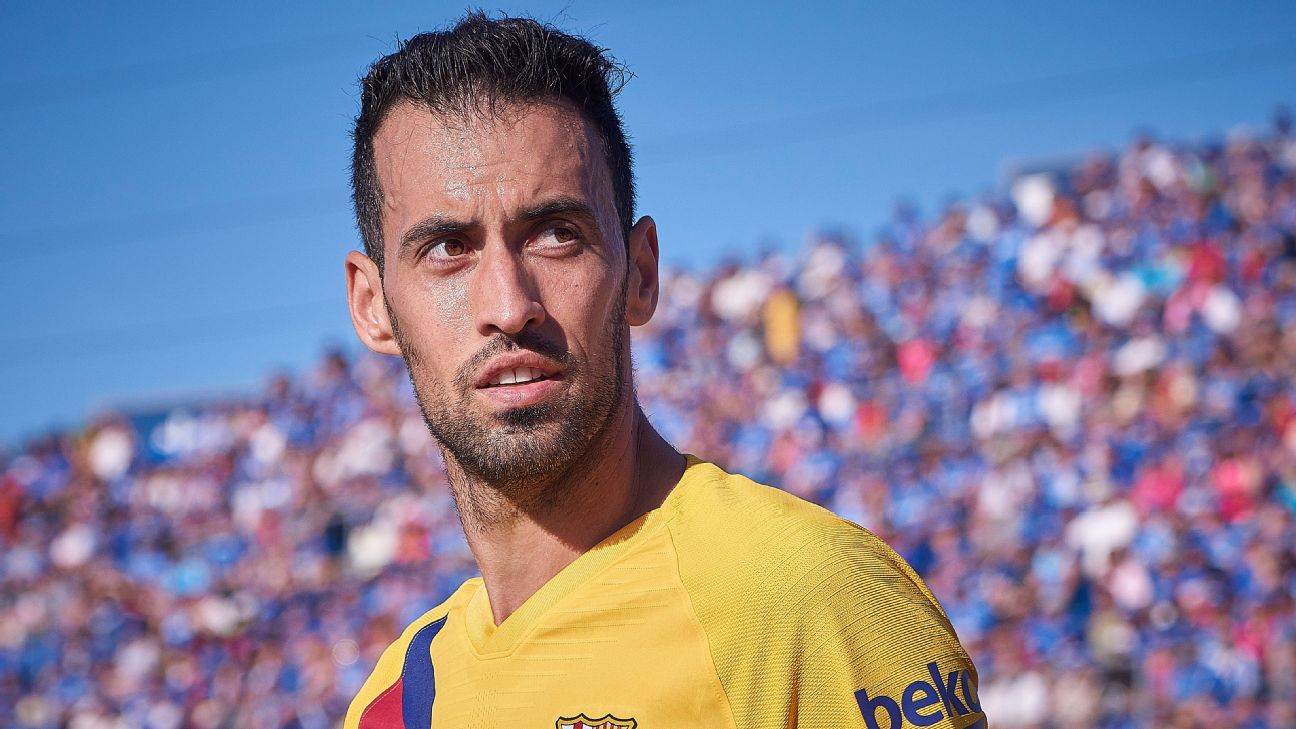 It’s ironic that it was Moreno, a Catalan, a self-declared Barcelona supporter and someone who helped coach that club to the Treble in 2015, who went on to name Sergio Busquets as the only Camp Nou representative with La Roja to play Norway and Sweden. There were, of course, eras when Barca would be sending seven or eight footballers off to Spain duty — Carles Puyol, Andres Iniesta, Xavi, Gerard Pique, Victor Valdes, David Villa, Pedro, and so on and so forth.

Sergi Roberto‘s form and Jordi Alba‘s injury partly explain why Busquets was deprived of any club company on the Puente Aereo (air bridge) from Barcelona’s El Prat airport to the Spanish capital. But it’s symbolic too, of the change happening in Busquets’s career, indicative of a massive sea change in elite European football and an indication that Moreno remains a true believer in the concepts that Johan Cruyff held and Pep Guardiola holds, but are now patently being eroded.

Busquets is enduring the bleakest beginning to any season since he broke through, under Guardiola, in 2008. Ernesto Valverde has dropped him three times — unheard of. He’s only eighth and 11th in the list of Barcelona players with the most minutes in La Liga and the Champions League, respectively.

And he was, ignominiously, hooked when Barca trailed Inter last Wednesday and their coach threw caution to the wind by moving to a 4-2-3-1 formation with the introduction of Arturo Vidal and Ousmane Dembele. Within five minutes of Busquets departing, the change worked. From 1-0 down to 1-1 and then a total domination of play that, eventually, brought an epic win.

Busquets’ replacement, Vidal, created the first goal, pressed like an enthusiastic rottweiler puppy and, realistically, changed the entire pattern of the game. The Chilean, at 32, is in his footballing twilight; but his attitude, physique, athleticism, aggression, pressing and tempo are all the prototypes for the kind of footballer Europe’s biggest clubs now covet. Times are changing.

That said, Valverde’s loss of faith in Busquets generally hasn’t been that profitable. Twice prior to Saturday’s 4-0 win over Sevilla, when he was also benched, the 31-year-old Catalan was dropped — in defeats to Athletic Club and Granada, no goals scored.

– Euro 2020 qualifying: All you need to know
– Lowe: Why Courtois is struggling to win over Madrid fans
– Odegaard showing La Liga he’s more than just a piece of trivia

Valverde’s loss of faith in Busquets also has been ultra dramatic. Last season, while winning La Liga for the eighth time since Busquets joined the first team 11 years ago, Valverde used this order-installing central midfielder in every single game from August until mid-April barring once — when he was suspended. Busquets was then rested against Huesca on April 13 so that he’d be fresh for Manchester United in the Champions League, then missed just one more La Liga match through suspension.

The conclusion: Across a season in which they won the title, came within a goal of reaching the Champions League final and lost the Copa del Rey final, Barcelona only played three La Liga matches without Busquets — winning none of them, failing to score in two and losing at Celta Vigo. No Busquets, no three points — that was the message just a few short months ago.

Then came the massacre of Anfield from which, there can be no doubt, Valverde drew sharp conclusions. Ivan Rakitic — Busquets’s bodyguard most of last season, his running mate and Winston Wolfe-like problem solver — seems to be on his way out of the club. Barcelona patently want to sell him. No Rakitic, apparently, means less Busquets.

All of which makes his Spain inclusion fascinating.

He’s at an age, and at an athletic stage, when you’d imagine that, like Pique, who’s only a year and a half the elder, Busquets might feel hugely relieved at getting several free days without matches or training over the international break. Time to clear the brain, disconnect, rid the limbs of any lingering, niggling pain, stay away from planes and trains and reset in time for the massively important couple of months between now and the short Christmas break.

And it’s equally interesting that Spain’s coach is still a firm believer. When justifying who he’d picked and who he’d unceremoniously dropped, Moreno said on Friday: “I believe players have to be in this squad because of what they do, not because of who they are.”

Completely fair, but of course, we’ve established that since the last international break, Busquets hasn’t been playing quite so regularly nor has his form been stellar. He’s in, though.

By comparison, Dani Parejo, who featured in three of Spain’s past four Euro 2020 qualifying matches — all wins — has scored a couple of goals and provided a couple of assists for Valencia since the last international break. He’s been dropped, though. Alvaro Morata, recently fit and back in Atletico Madrid’s starting lineup — not to mention a regular goal scorer for Spain — is also excluded and felt moved to point out, unhappily, “I’d really hoped that I would be picked for this squad.”

This column isn’t about Parejo or Morata, but they serve to show that, to Moreno, Busquets remains special. Neither his absence from the Barcelona team nor his form affected his selection. Moreno wants a cerebral presence in midfield in order to withstand helter-skelter pressing from Norway and Sweden — the very thing Valverde seems not to trust now.

Way back when the Catalan broke into Guardiola’s Treble-winning 2008-09 team, Valverde, then at Villarreal, was asked to assess Busquets: “He oozes self-confidence and, from day one, has known precisely what to do in every situation. He adds equilibrium and control to Barcelona’s midfield,” he said a decade ago.

But when he was asked about Vidal’s introduction against Inter, Valverde said: “Vidal brings pressing and a certain disorder between the lines which we needed. If we want control and possession, we’ve got Arthur and [Frenkie] De Jong.” Please note: no mention of Busquets in relation to “control” and “possession.” Unthinkable a season or two ago.

But this isn’t an isolated issue. Possession-based football is under attack all over Europe. Tottenham have faded this term, Manchester City are wracked by injuries, Marcelo Bielsa’s Leeds didn’t get promoted, Chelsea sacked Maurizio Sarri despite him getting them playing the closest thing to Guardiola football as is possible to imagine, and La Roja themselves are deep in transition.

Trying to work out if the formula that brought them three straight international trophies is sustainable without possession addicts like Xavi, Iniesta, Villa, Xabi Alonso, Marcos Senna or David Silva? Roma, Liverpool, Paris Saint-Germain and Juventus all have trampled over Barcelona recently. They are bigger, faster sides packed with stamina, not lacking technical excellence, intelligence or wit; but certainly not playing the brand of football for which Busquets is now an increasingly isolated representative.

This was once Guardiola.

Busquets has always been the closest thing to a young, dominant, intelligent Guardiola, the fulcrum of Cruyff’s “Dream Team” of the early 1990s. He possesses the same ideas, same skills, same deficiencies (pace, power and athleticism), same brilliant technical gifts and vision, same bravery in showing for the ball, intercepting danger, thinking three passes ahead of everyone else.

Within a couple of seasons, Guardiola was in Qatari football, saying: “I think players like me have become extinct because the game is now more tactical and physical. At most clubs players are given specific roles and creativity can only exist within those parameters. To play in front of the back four now you have to be a ball winner. If I were a 20-year-old at Barcelona now I’d never make it as a professional. At best I’d be playing in the third division somewhere.”

Although it’s happening again, the outlook for Busquets is not so glum. On form, with runners around him, with Arthur blossoming and De Jong’s heyday some time away, he can still be deeply influential for Barcelona in specific types of contests. His brain is as bright as ever, his technical marvels undimmed. But he continues to be hustled, hassled and pressed, he continues to give away far more possession than was once imaginable.

One day, some time hence, Xavi will be Barcelona manager and, if Busquets isn’t still playing, he’ll be Xavi’s assistant. Bank on it. That’s when 4-3-3, position, possession and pressing will be the untouchable mantras at the Camp Nou once more.

For the moment, Busquets has two choices: hunker down into a mode in which he squeezes every last drop of quality out of decreasing first-team starts, or follow Guardiola’s 2001 decision to seek out new pastures in a league in which brains, technique and vision are rated more highly than speed, power and perpetual high-tempo pressing.