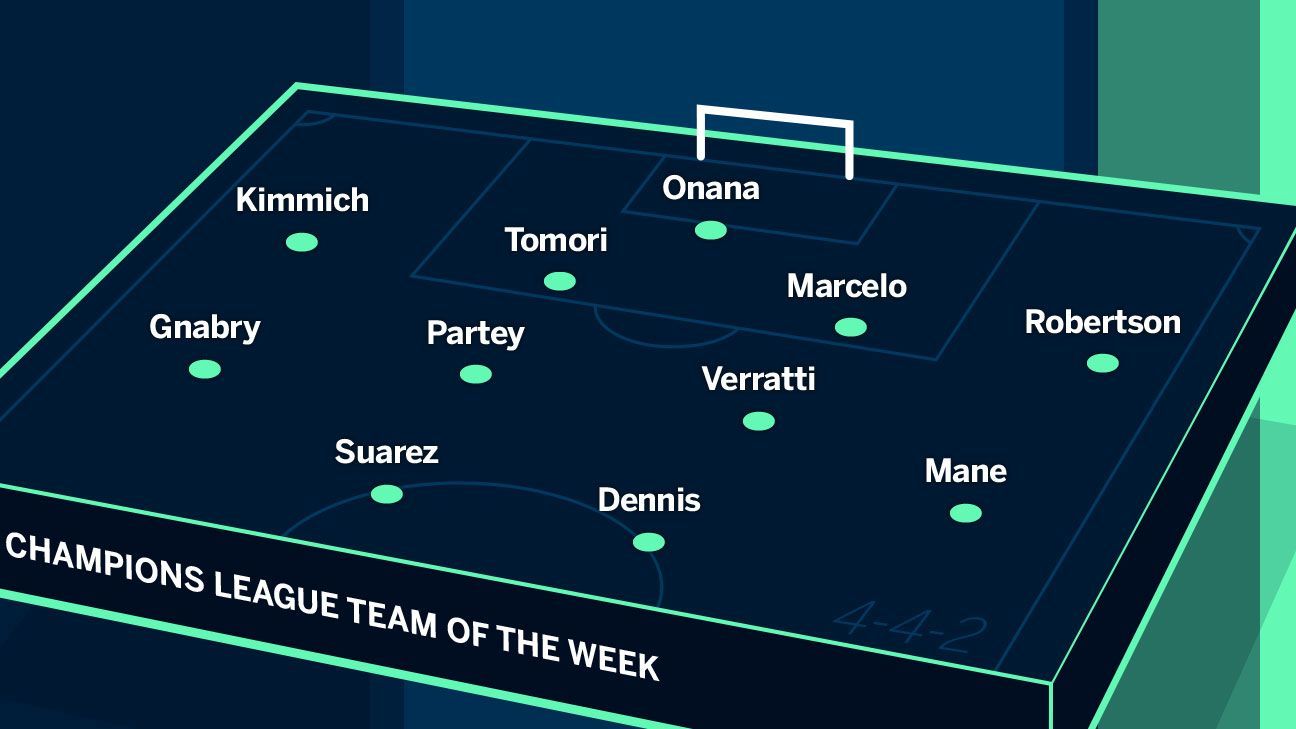 With the second set of Champions League group stage games finished, we look at who stood out from this week’s performances.

Among all the deserved plaudits that Ajax’s players received in their run to the semifinals last season, it felt like goalkeeper Andre Onana got lost in the shuffle. But he’ll get some more attention if he keeps playing like he did against Valencia this week: Onana got lucky when Dani Parejo hoofed a penalty over the bar, but his sensational save alone from a deflected Ferran Torres shot was enough to get him in this team.

When a team scores seven goals away from home, it would be pretty easy to just copy their whole XI into a team like this, but in the interests of variation we haven’t done that. Kimmich gets the nod though, not only because he scored one of those seven goals but also because of his all-round performance, which was as strong as we’ve all come to expect from a defender shaping up to be an all-time Bayern great.

Even though his hand has been forced to a point by their transfer ban, Frank Lampard isn’t picking these Chelsea youngsters to make some sort of idealised point about youth development. He’s picking them because they’re good, and in the long run Tomori might turn out to be the best of them all: he was superb once again in their win over Lille, both in his usual defensive duties and with a fantastic long pass to set up Tammy Abraham for Chelsea’s opener.

These are uncertain times at Lyon, with new manager Sylvinho under some pressure after a tricky start to the domestic season. Perhaps the Champions League will turn out to be a form of respite, and their impressive win over RB Leipzig on Wednesday might spark a few things they can use as the season goes on. At the heart of that win was a fine defensive display by Marcelo in the middle of their backline, repelling numerous attacks by Julian Nagelsmann’s often rampant forwards.

An easy trap to fall into when picking defenders for these composite teams is just to select ones who have scored a goal and not pay much attention to their defensive performance. But when the goal is as good as the one Robertson scored against FC Salzburg, you can make an exception. Finishing off a sensational team move that also involved his fellow full-back Trent Alexander-Arnold, is there a better left-back in the world right now than Robertson?

PSG’s 1-0 win over Galatasaray on Tuesday will not go down as one of the Champions League’s classic encounters. It was a solid job well done by the Parisians, and at the heart of it was their Italian string-puller Verratti, who held the team together in Istanbul and also should have registered a magnificent assist, with a fantastic pass down the left that set Angel Di Maria free, only for the Argentine to fluff the finish.

There’s something very reassuring about Partey: when he’s on the ball, you get the feeling that everything is probably going to be OK. And it was for Atletico Madrid in Moscow on Tuesday, a game against Lokomotiv that they won 2-0 and was broadly controlled by the Ghana midfielder, who scored the second and spent the rest of the game holding things together for Diego Simeone’s side.

Mohamed Salah might have scored twice and got the winner, but it was another Liverpool forward who gave a better all-round showing in their 4-3 win over FC Salzburg. Mane could be the form forward in Europe at the moment; he displayed that at Anfield with a tremendous all-round performance and a glorious goal with the help of Roberto Firmino.

If any Tottenham fans want a bright side from their calamitous, crushing 7-2 defeat at the hands of Bayern Munich on Tuesday, it’s that their crusher-in-chief was sold for a mere £8 million by Arsenal a few years ago. The most impressive part of Gnabry’s performance was its ruthlessness: he detected that the fight had gone out of the Spurs defence in the closing stages, and took advantage of that without mercy for his four goals.

Every time you think Suarez is done, he comes back, like the villain at the end of a horror movie. His performances might have been on the wane for a couple of seasons and he hasn’t really been able to inspire Barcelona much domestically, but he saved their bacon against Inter on Wednesday night with a brace to secure a key victory for Ernesto Valverde’s side. He was helped along significantly by Lionel Messi, but Suarez was the man with the finishes to earn that 2-1 win.

Club Brugge striker Dennis made a promise before their game against Real Madrid this week: that if he scored, he would get a tattoo to commemorate the feat. As it turns out he might need a couple of tattoos after he scored twice in the Bernabeu – a pair of goals might have been enough to win the tie in most circumstances, but it was cancelled out by a late Sergio Ramos and Casemiro-inspired comeback.

Dembele strike sends Barcelona into Copa semis
The USWNT needs Julie Ertz but she won’t be at the World Cup. What now?
Sources: LaLiga reject Gavi’s contract request
Explaining Juventus mess: What they did wrong and what it means
Ibrahimovic slams Argentina for WC celebrations