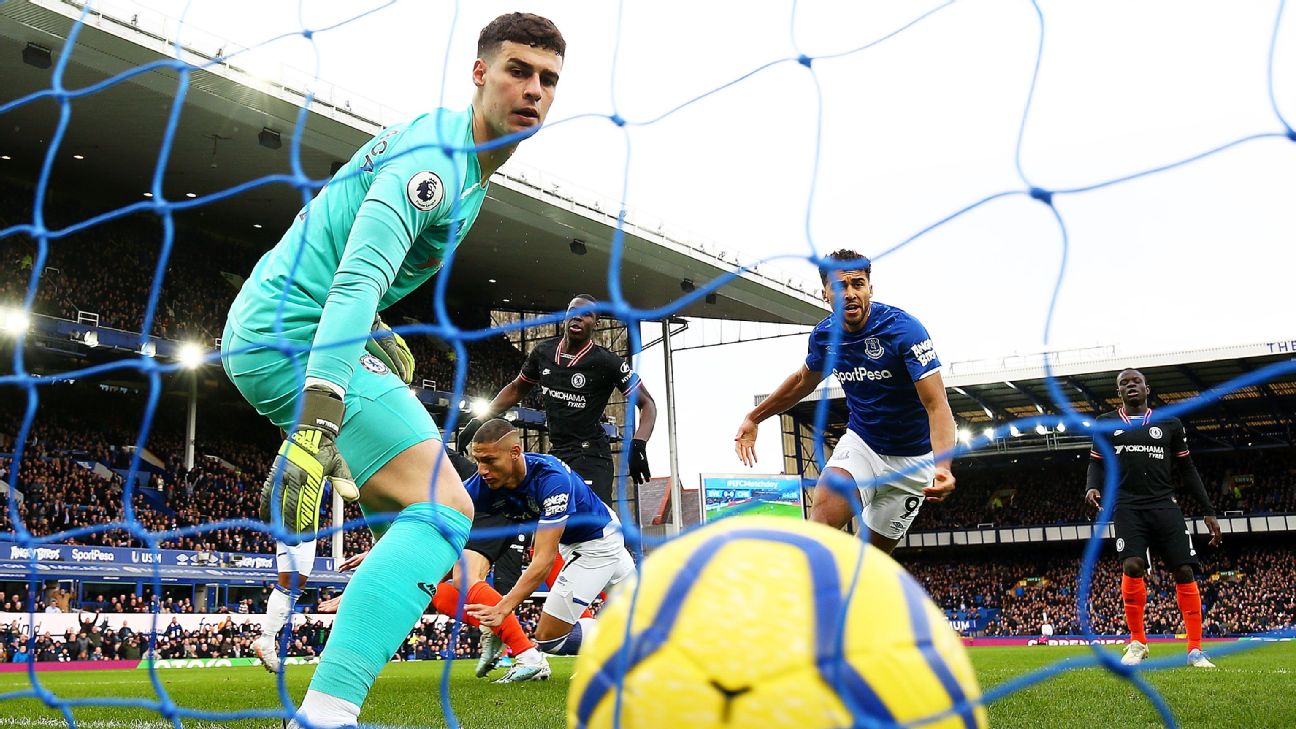 Chelsea suffered the effects of new-manager bounce as Duncan Ferguson’s interim tenure at Everton got off to a flying start by beating the Londoners 3-1 on Saturday.

The home side hassled and harried Chelsea all over the pitch and deservedly took the lead when Richarlison evaded Andreas Christensen to score his fifth goal in seven games. Dominic Calvert-Lewin doubled Everton’s advantage shortly after the break, and while Mateo Kovacic pulled one back with a stunning side-footed volley, a second Calvert-Lewin goal following a dreadful pass from goalkeeper Kepa Arrizabalaga put the game beyond doubt.

This was a tight game in which Chelsea were given little time on the ball or space to play. However, Frank Lampard’s side showed good character to dominate spells of possession and they still managed to carve out a number of good goal-scoring chances.

Chelsea haven’t won a game after going behind this season and that run continued at Goodison Park. Lampard will be particularly frustrated with the goals conceded, sloppy mistakes costing his side on three occasions. Space was at a premium and Chelsea were often second in the challenge, with even N’Golo Kante guilty.

6 — Lampard was unlucky to face an Everton side eager to please their new manager and, as a result, his side found Everton with their tails up. Chelsea enjoyed spells of possession and created chances, but sloppy defending ultimately cost them. Lampard’s two substitutions came too late to make an impact.

GK Kepa Arrizabalaga, 5 — Another game without a clean sheet. That’s now just four shutouts in 24 games for the Spaniard. He could do little about Richarlison’s header but saved well from Calvert-Lewin in the first half and Theo Walcott in the second. His ludicrous wayward pass set up Everton’s third.

DF Reece James, 4 — It was a quiet game for James, although he had Chelsea’s first chance of the game: a speculative flick from a cross. Struggled to get forward and had a tricky afternoon at the other end. Substituted late on.

DF Andreas Christensen, 4 — Chelsea’s central pairing didn’t cover themselves in glory for any of the goals, Christensen second best to Richarlison for the first after allowing the Brazilian to climb over him to head home. Came close to scoring with 10 minutes left on the clock.

DF Kurt Zouma, 4 — Zouma was also guilty of being wasteful at the back. He let Calvert-Lewin get the wrong side of him to almost double the lead in the first half. Sloppy with the ball at the back at times and invited pressure on the back four.

DF Cesar Azpilicueta, 5 — The skipper made positive contributions at key moments, his first a crucial block on the dive from Walcott’s goal-bound shot. In the second half, it was from his surging run that the ball fell to Kovacic to level.

MF N’Golo Kante, 5 — Unusually second to the ball at times in the fast half and the Frenchman couldn’t stamp his authority on the game. Was able to apply more presence in the second half but couldn’t have an impact on the proceedings.

MF Mateo Kovacic, 7 — Kovacic was caught in possession far too often in the first half but he excelled in the second. He netted his first Premier League goal at a crucial point after Chelsea had just gone two goals down, his clever volley from outside the area hauling the visitors back into the game. He came close to netting a second with a driving run and shot that went just over the bar. He also delivered a delightful ball into the area before Mason Mount blazed over.

MF Willian, 5 — Was at the centre of Chelsea’s attacks when they broke forward in the first half, although he found very little space in front of him. One of his driving runs on the right led to a cross that was almost turned in by Tammy Abraham.

MF Mason Mount, 6 — Lovely turn in the first nine minutes but had little space or time on the ball, at times having to drop deep. Found most joy in wide areas and at one point broke free to flash across the area, but Abraham couldn’t finish. Should have equalised twice. First, he opened up his body too much to shoot high and wide when Kante set him up, and then he saw a shot blocked from close range late on.

MF Christian Pulisic, 5 — Looked lively on the ball and eager to run at defenders. He had little room to play in but though he was a source of inspiration going forward on the left, he struggled to deliver. Had a fascinating tussle with Djibril Sidibe.

FW Tammy Abraham, 6 — Came close on several occasions in the first half. First, he made a great run to attack the near post and meet Willian’s cross but he couldn’t get enough on it. Then, he couldn’t quite reach Mount’s cross after the half hour mark.

MF Callum Hudson-Odoi, N/R — Came on with 19 minutes left on the clock but didn’t make a huge impact. Everton’s compact and harried approach made it difficult for him to get involved.

FW Michy Batshuayi, N/R — The striker came on with eight minutes left but didn’t get into the game.