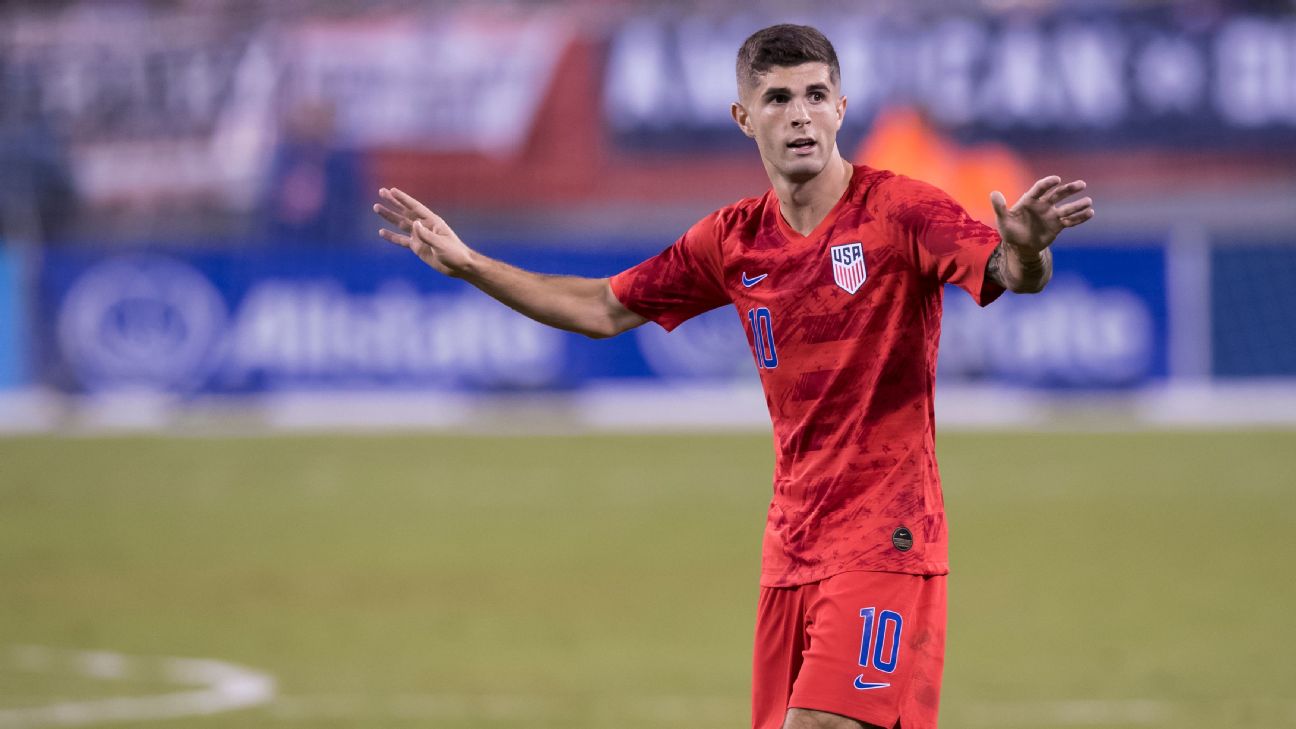 Christian Pulisic, Weston McKennie and Jozy Altidore headline the 26-man U.S. roster as manager Gregg Berhalter prepares his side for its initial foray into the CONCACAF Nations League.

– World Cup 2022 qualifying: All you need to know
– Sergino Dest could be USMNT’s next big thing
– Pulisic Watch: How U.S. star is doing at Chelsea

A revised World Cup qualifying format for CONCACAF will use the FIFA World Rankings to determine which teams advance to the final round Hexagonal, due to begin next year. While the U.S. — currently ranked second in CONCACAF — is a shoe-in to make it to that stage, the Nations League will have an impact on those rankings.

Teams not ranked inside the top six aren’t completely shut out of qualifying for the 2022 World Cup, but will instead have to go through a second, more rigorous playoff track involving 29 teams and between 14 and 16 additional qualifying matches for each, just for the opportunity to claim the final spot. That gives the U.S.’s group opponents, Cuba and Canada, plenty to play for. The U.S. faces Cuba at Audi Field on Oct. 11, and will play Canada at Toronto’s BMO Field four days later.

“This is competitive soccer. Any time there is a trophy on the line and in the inaugural Nations League tournament, we want to put ourselves in a position to win,” Berhalter said. “One thing that’s important is we continue to bring some of the younger guys along, integrate some new players into camp, but also have a familiar base. Most of the guys have been in camp before, understand how we want to play, and we think that continuity will help in our performance.”

Berhalter has more of his first-choice roster available thanks to the return from injury of Newcastle United defender DeAndre Yedlin and Reading defender Matt Miazga. The same can’t be said for RB Leipzig midfielder Tyler Adams and Lille forward Tim Weah. Adams recently returned to training following a groin injury, but has yet to see minutes with his club. Weah is dealing with a hamstring injury.

Much focus remains on the 18-year-old Dest, who has broken into Ajax’s first team this season following some excellent performances for the U.S. at last summer’s FIFA U20 World Cup. Dest appeared in two matches for the U.S. during the last international window, but an appearance in the Nations League would tie him to the U.S. permanently. Koeman recently met with the defender to gauge his interest in playing for the Dutch. Berhalter has been in contact as well, yet Dest isn’t on the roster for these two games.

Wolfsburg defender John Anthony Brooks also misses out as he deals with a hamstring injury.

The biggest surprise among the invitees is midfielder Brenden Aaronson. Aaronson has enjoyed a breakthrough season with the Philadelphia Union, scoring three goals and adding two assists in 27 appearances. He has also impressed in training camps with the U.S. U23 team.

“There are two things that stand out about Brenden. The first thing is that he’s getting regular minutes, and the second is that he’s playing for a team that’s doing really well,” Berhalter said. “We always look for that combination. He’s a very agile player, very aware between the lines, able to give solutions offensively and very secure on the ball. He’s another case of getting a younger guy into the program, getting our eyes on him and also letting him understand what it means to be in with the full men’s national team.”

The roster also includes the Toronto FC duo of Altidore and Michael Bradley, who will have the unique opportunity of facing Canada in their club’s home stadium.

“I think it’s very important to have veterans in the team; for them to share the heritage of what it means to be a United States men’s national team player,” Berhalter said. “For them in particular to go back to Toronto and play a game of this magnitude is special. We know they will be familiar with their surroundings, we know they will be familiar with the opponent — playing with some of the Canadian guys at TFC — so we think it’s a great opportunity for them.