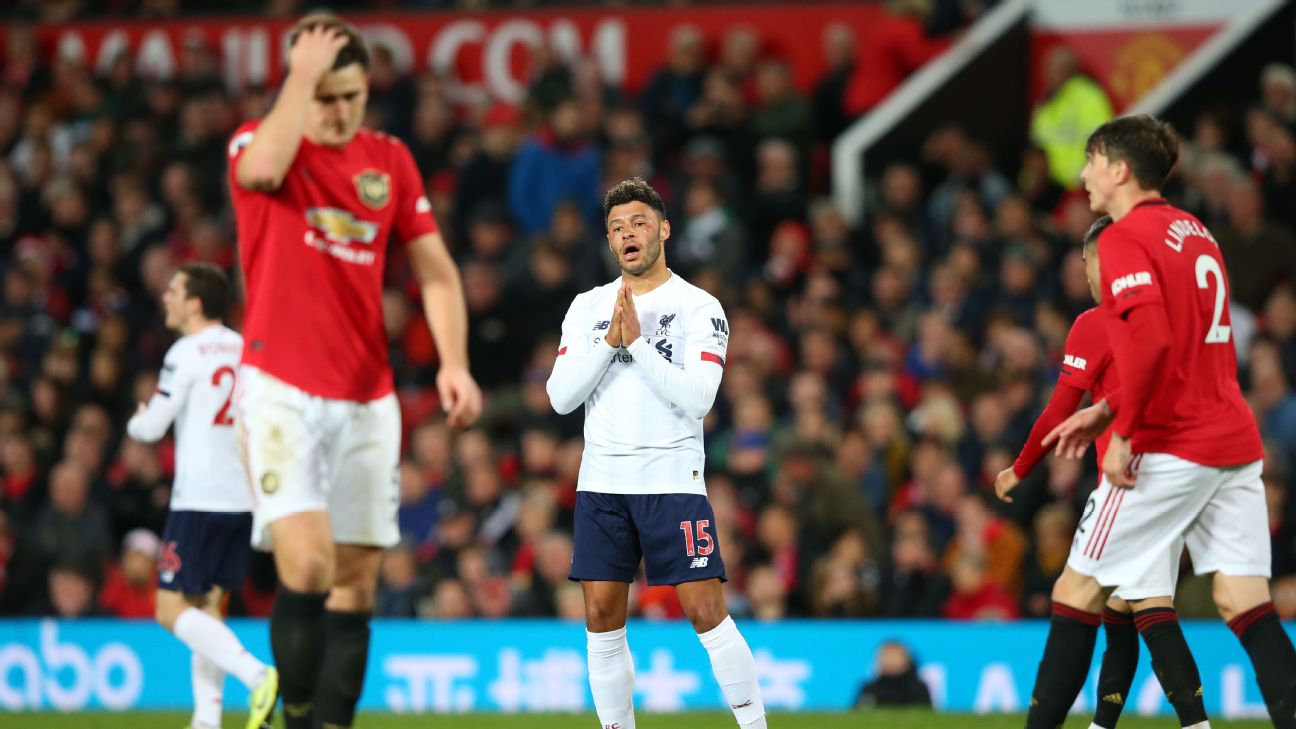 MANCHESTER — Sometimes, a team’s prospects cannot be boiled down to the outcome of one game. As tempting as it is to assess Liverpool’s title credentials or Manchester United’s ability to kick-start their faltering season after Sunday’s 1-1 draw at Old Trafford, sometimes the outcome is nothing more than what it is: the result at the end of 90 minutes.

“Everyone builds it up like a mountain, but only one team has to defend and the other team has to make the game. It’s not the feeling that we won something today: it’s just a point.”

Liverpool dropped points in the Premier League for the first time this season and fell one game short of equalling Manchester City’s record of 18 consecutive league victories, by failing to make it nine wins out of nine since the start of the campaign. But this wasn’t a day when the cracks began to appear in Liverpool’s title bid. It’s true that Klopp’s team produced arguably their worst performance of the season, but they did so without the injured Mohamed Salah and still managed to remain unbeaten, six points clear of City at the top of table.

The good fortune they had in defeating Sheffield United recently, when Blades goalkeeper Dean Henderson’s error gifted Liverpool a 1-0 win, did not come to their rescue at Old Trafford as two VAR reviews — one for a foul in the build-up to Rashford’s close-range finish, the other for a handball against Sadio Mane before he scored what looked to be the equaliser — went in favour of the home side. But Liverpool still found a way to dig out an equaliser through Lallana on a day when United came so close to turning a corner after their dismal start to the campaign.

Some will suggest that Liverpool displayed the hallmark of champions by getting a 1-1 draw on a bad day, but that’s an easy cliché to trot out. As Klopp said, Liverpool grabbed a point and nothing more. And just as this result does not offer a crystal ball into Liverpool’s future, the performance produced by Ole Gunnar Solskjaer’s players should not be used as a yardstick for the rest of their season either.

If Sunday’s draw was compared to United’s performance when losing 1-0 at Newcastle in their last Premier League outing, the difference was like night and day. But such is the rivalry and the battle for supremacy between English football’s two biggest clubs, Solskjaer was always going to get a performance from whichever 11 players he put out on the pitch. A truer gauge of this team’s prospects will come at Carrow Road next Sunday, when United face a Norwich team that has beaten City on home turf this season but also lost 5-1 at home to Aston Villa. It’s easy to raise your game against Liverpool, but much harder to produce a 9 out of 10 performance away to Norwich.

It would be foolish to draw conclusions about the likes of Andreas Pereira, Marcos Rojo and Fred after their exploits against the European champions. If those players, and others, can be as effective when they are expected to win, like at Norwich next week, then United might just be on the road to recovery. But right now, they are still in the bottom half of the table, two points above the relegation zone, and without a win in six games in all competitions.

If anything, this game exposed the limitations of the two sides, who have vastly different objectives to pursue this season.

If Pep Guardiola was watching, he will have noted Liverpool’s inability to carve an opponent open as easily as his City side can. Liverpool have many qualities but their midfield often lacks creativity and, speaking in his role as a television pundit at the game, former United manager Jose Mourinho highlighted this shortcoming.

“[Liverpool] missed quality to play against a team with a low block,” said Mourinho. “They have a fantastic record of so many victories, but they have limitations against teams with low blocks. They can smash opponents that play the way they want to play against, though.”

United have similar problems, but theirs run much deeper than Liverpool’s. Defensively, United kept Liverpool relatively quiet, so there are signs of improvement at the back. In midfield, Pereira, Fred and Scott McTominay were industrious but lack the game-changing quality that might — might — be offered by Paul Pogba once he returns from a foot injury. Solskjaer was happy to take the positives out of this game — and rightly so — by talking about his players’ improved “fitness, aggression, attitude and desire,” but they still only managed two shots on target and troubled Liverpool through their industry rather than quality.

Maybe this game will prove to be a turning point for United. Perhaps the hard-fought point will be the one which wins Liverpool the title next May. But it may mean nothing more than a point for both sides. Sometimes that happens: not every game or result is decisive over the course of a long, tough season.