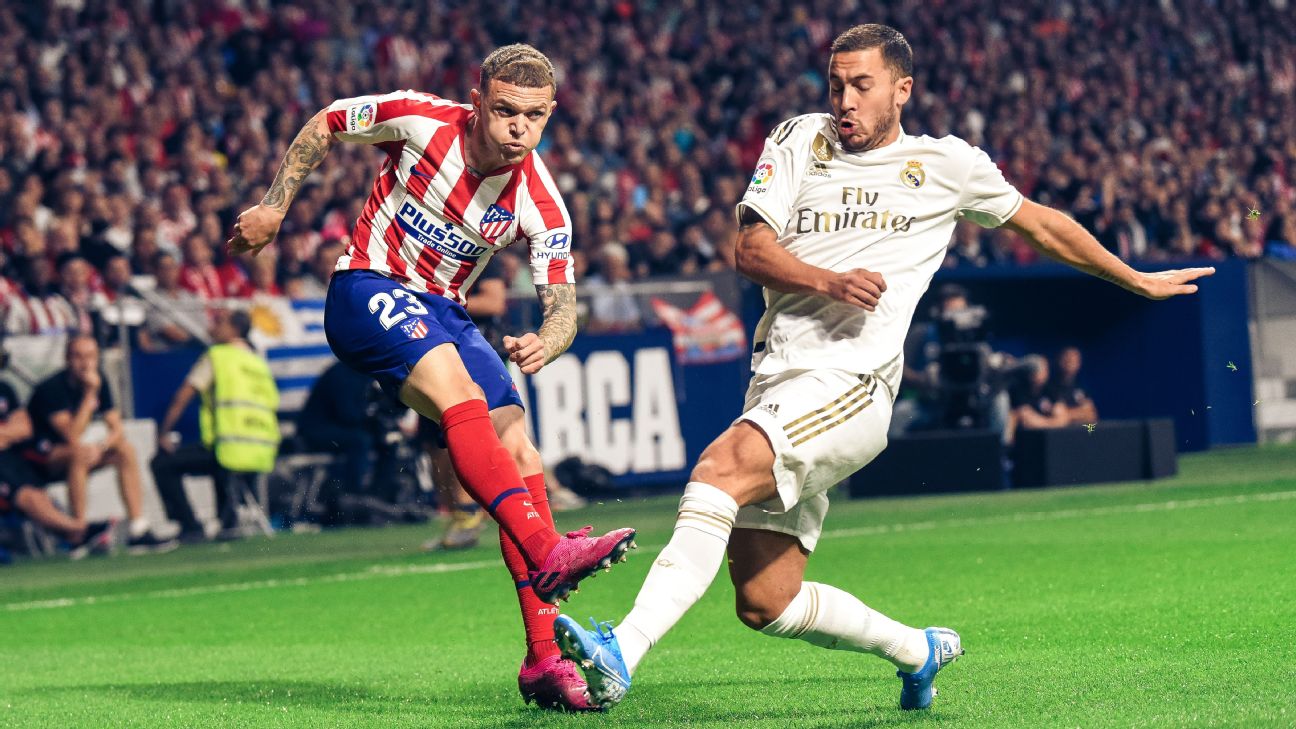 MADRID — By the end of this derbi, take my word for it, Kieran Trippier stood in the flash zone of the Wanda Metropolitano and gushed with enthusiasm for what he’d just been through.

The phrase “best derby I’ve ever played in” was the one he reached for. North London? Spurs vs. Arsenal? What are they?

I’m an optimist, a romantic, and therefore, sure, like everyone else I’d have loved Karim Benzema‘s wonderful, towering header to have sneaked into the corner of the net or Trippier’s searing cross in Saturday’s first half to have met the toe of Koke’s boot as it was intended to and zipped past Thibaut Courtois.

We love goals, all of us. But I was inspired by this meeting of Madrid’s two biggest, noisiest inhabitants.

Trippier had loved the intensity, the tension, the different kinds of questions Spanish football asked him compared to the Premier League.

More — and typical for someone who’s steadfastly set himself to learn Spanish at double-quick time, we shouldn’t be totally surprised — the Bury Beckham has pretty instantly understood the impact of this cross-capital feud.

The welcome for the Atleti bus as it nudged along Avenida Luis Aragones and reached the space-age Wanda Metropolitano was rapturous. Of course.

Vibrant, loyal, defiant, things exploding (fireworks, don’t worry) and passionate about their team. As a Scot, I know how inspirational it can be to perpetually feel like the underdog — that’s the Atleti experience when Madrid lord it over them.

But before he went out and dignified this 0-0 draw with daring, athleticism, intelligence and total, total focussed attention I guess some ghosts danced their way through Trippier’s psyche.

It was in exactly this spot that he said goodbye to Tottenham. The Metropolitano was not only the disappointment of his entire playing career, even ahead of losing a World Cup semifinal with England, having put them 1-0 up against Croatia.

To reach Spurs’ first European Cup or Champions League final and lose without properly competing, without fully imposing their personality, must have been truly heartbreaking.

Then, in the same part of the deep bowels of this magnificent arena, to admit, as Trippier did, that his season hadn’t been up to scratch and that he had to change something, struck me as the mark of a true man.

Honesty, self-assessment and painful admission on a night when most competitors, especially proud ones, must have wanted to go and either hide or drown sorrows until they couldn’t swim around the mind.

So, suddenly, he was back at the Metropolitano, not for a debut, but for the biggest test, Juventus included, of his adaptation to La Liga football.

Honestly, while he wasn’t the man of the match, I thought Trippier was super.

Athleticism, yes. Diligence, yes. But also terrific application of football intelligence to the extent that he was able to test the rivals in front of him and to blunt Eden Hazard, on Madrid’s left, while the Belgian was full of vitality and impishness.

Trippier’s key moment came midway through the first half when, set free down the right, he made time stop and looked up in a kind of theatrical way as if to say: “Hey, LADS, I’m in a great position here … anyone want to take advantage?”

Captain Koke did, but it was typical of the two strikers, Diego Costa and Joao Felix, each of whom had a night when they certainly didn’t want to offend any visiting player (choirboys let’s say) that they weren’t in the vicinity.

So Koke bursts into the Madrid box, Trippier’s centre is what the Oxford English Dictionary would define as ‘The corridor of uncertainty’ and it’s fizzing along at laser-speed.

– Champions League group stage: All you need to know
– When does the transfer window reopen?

Oblak’s save from Benzema might have been the goal-prevention moment of the raucous night, just ahead of his full-length dive to his left to push Toni Kroos’s wonderful right footed volley around the post.

But Courtois’ interception of that Trippier centre, a six foot four man not only at full stretch outwards into his six yard box, but with arm extended like Clark Kent, was simply magnificent.

They’ll be back for more. I liked watching an English import look not only as if he was comfortable in his clothes, but utterly enjoying himself.

What added a little lustre to Trippier’s night was the fact that he really worked another Belgian in a way which spoiled the chances of this being an ultra-hazardous night for the Colchoneros.

Hazard was superb last week against Sevilla, given a good rest in midweek during the Osasuna win, and I guess the concept of manager Zinedine Zidane was that this would be his star signing’s five-star night — instead Trippier did enough harrying, and fussing around the former Chelsea man that, gradually, he drifted out of the contest. Not a terrible night from Hazard, not anywhere near it. And when he’s fit he’s going to feast on some of La Liga’s defences.

However Trippier did a double shift of such proportions that he was a constant threat up the pitch, and he never allowed his direct rival to impose himself at the other end. Diego Simeone, even though this project with his English patient is only partially completed, will be extremely happy.

This, you have to see, isn’t the Trippier who exited the Metropolitano with his head hanging low, self castigating and out of form.

A matter of a few months later and he’s buzzing that he made this move, buzzing that he’s at least the equal of anyone in the Atletico team and, now, certain that his status in the Madrid neighbourhood where he lived has just rocketed.

But it would be impossible to leave this assessment of the derbi without saying two important things.

Firstly, as impressive as Atleti’s new right-back was, his place on the podium was looking up to Ghana’s Thomas Partey

The midfielder was superb — he out-Casemiroed Casemiro.

Quick to press, clever in the tackle and superbly firm the things which were most to savour about his performance were that he not only passed beautifully between the lines of pressure from Real Madrid, he also made his job look easy. So easy that he was often a thought or three ahead of the rivals buzzing around him.

Easily one of the best games Tommy boy has played for Atleti.

But, Real Madrid. Anyone who saw them in Paris ten days ago, giving up the ghost, not chasing the ball, leaving their brilliant, elegant manager, Zidane, complaining that they ‘didn’t put a foot into challenges’ wouldn’t recognise this XI.

Madrid have now gone out, sequentially, and out-competed Sevilla in a stadium where they’ve lost more often this century than any other arena. And won.

Then they dealt, stylishly, with Osasuna thanks to two goals from their Brazilian babies.

Now they’ve come to the Metropolitano, they’ve not only matched Atleti but probably are the unluckier side to depart with only a point and, in my humble opinion, they are on the road to a credible La Liga season.

From the humiliation of Paris to this reaction? Seven of the next nine points, three clean sheets, successful team rotations — crisis, what damn crisis?