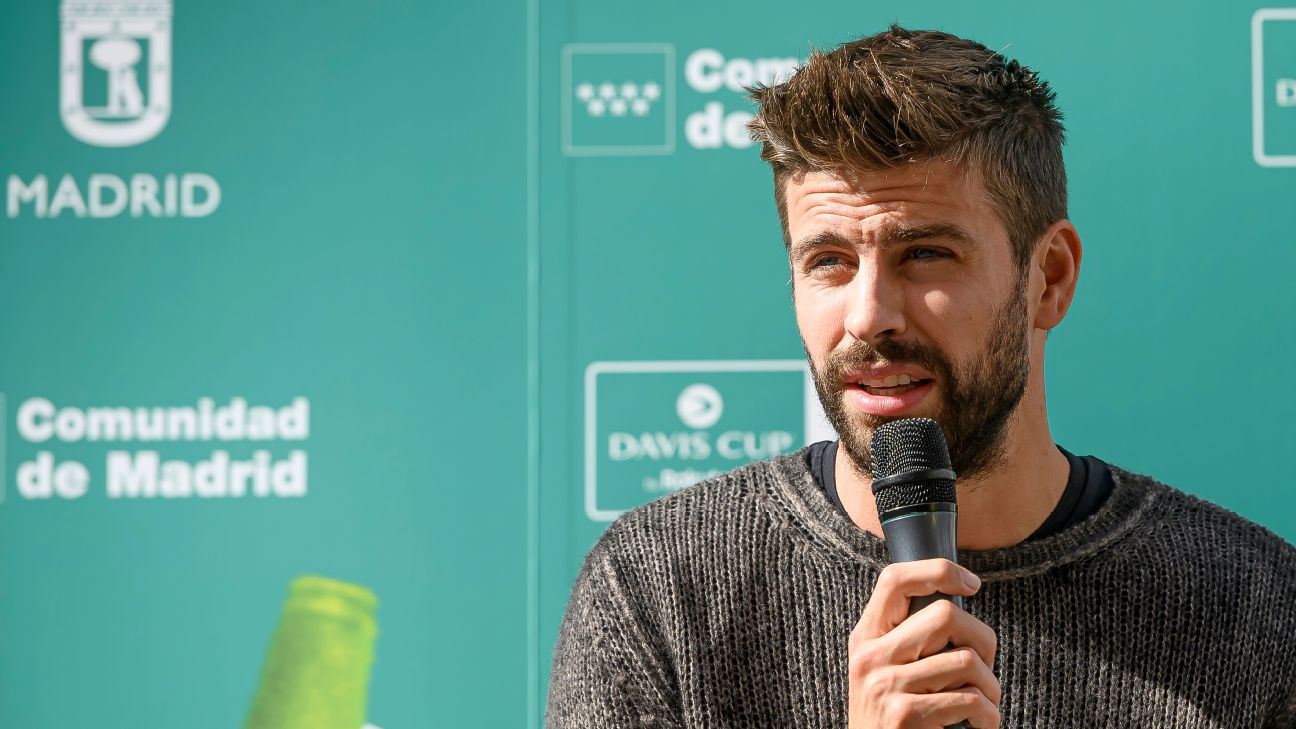 Barcelona, Madrid, Valencia and back again, and that’s where it really begins. On Tuesday, Gerard Pique was part of the Barca team that went to the top of La Liga with a 5-1 win over Valladolid, spending the last 20 minutes or so playing up front, as he tends to do. The next day he was in Madrid, finalising plans for Davis Cup tennis. (The competition is being revamped by an investment group, with Pique as the leader.) And on Saturday afternoon, he’ll be down at the Ciutat de Valencia stadium as Barca seek to stay top before heading back to Catalonia for a busy weekend. Not that it’s especially unusual: “I travel loads, even more than people think,” Pique said this week.

He said so late on Wednesday, rounding off a day in Madrid with a visit to the studios of Cadena Ser radio on Gran Via, where he gave a long and fascinating interview on the El Larguero show, a media appearance that has dominated the agenda since it aired. It’s not easy to be everywhere, but he tries: there’s a lot to do, he says. There’s the football, lots of football, from on the pitch and off it. There’s the business, lots of that too. And there’s the tennis.

You must need to hop into a helicopter half the time, the presenter said. “I’ve taken helicopters sometimes,” Pique replied, “but they really frighten me, so I only do it if there’s no other choice. I have a very bad time of it.”

Earlier this season, Pique admitted that he approached Barcelona coach Ernesto Valverde because he had to go to Orlando, Florida. The first time, Valverde didn’t say yes or no, so Pique went back after the 2018 Supercopa de Espana, in which he’d scored, and renegotiated.

“I spoke to him again and said: ‘Ernesto, remember that thing I told you? I’m only going to miss one training session, and I promise we’ll win the league game. Don’t worry.’ That was where he accepted and he asked me where I was going. I told him it was Orlando, and he jumped. ‘Don’t even think about it, that’s a very long journey.’ I said I’d come back and we’d win.”

The punchline wrote itself.

“I went, we sorted out the [Davis Cup] format and when I got back, we won.”

Pique really loves it when a plan comes together, which a lot of his plans have, and while many consider his hyperactivity and constant travelling a problem — part of the reason he was asked about it again this week — Pique doesn’t agree. “Pop a pill, sleep, and you’re fine on a plane.”

Besides, sometimes it’s good for the club, too. It was on a trip to San Francisco that Pique arranged a meeting between Barcelona president Josep Maria Bartomeu and Hiroshi Mikitani, the founder of Rakuten. There’s a reason it’s their name on the front of the team shirt. There’s a reason too, why some players fancy management when they retire but Pique fancies the presidency. And plenty of people fancy Pique in the presidency.

This weekend, Pique will head off to watch his son play football with the Barcelona school, alongside teammates’ sons Thiago Messi and Benja Suarez. “My son is like Arturo Vidal,” he joked: “he spends more time on the floor than on his feet. Thiago has a nice touch. And Luis’ son is a bit better than the rest. Benja runs all over the place. The kids are like their dads.”

After that, he has another game to attend. Plenty of players watch games between two former clubs; on Sunday at 6 p.m. local time, Pique will watch a game between his two current clubs, when Barca B face FC Andorra.

Pique bought FC Andorra in December 2018. His company, Kosmos, took on the club’s €300,000 debt and turned it into a private company, investing in the squad and the infrastructure. Although the team traditionally plays in the first regional division in Catalonia or in Spain’s tercera división (in the Catalan group), where attendances tend to be around 450 per game, the ambition was to take them beyond that and to build a club. Gabri was made the coach, with Albert Jorquera as his No. 2: both men boast a Barcelona playing past. They signed Marti Riverola. He has played in Austria, in Italy and at Barcelona, a B-team player who made one first-team appearance. There’s Miguel Palanca too, who made his debut for Real Madrid in 2008 against Barcelona.

In the summer, Andorra paid €452,000 to take the place left vacant in Spain’s Second Division B by Reus, the club whose financial crisis saw them kicked out of the league. Right now, they’re third, holding a playoff place. Barcelona B are fourth.

FC Andorra, the Davis Cup, Kosmos: they’re all reasons Pique says he isn’t thinking about the presidency just yet. But they’re also reasons to believe that he might one day, and that he will be better prepared when he does. To think, in fact, that this is exactly that: preparation.

As the grandson of a former club director, who tells the story of the time Louis van Gaal came around his house and pushed him on the floor declaring him too weak to be a Barca player, there’s something about Pique that fits the role. A youth team player who left to learn but came back again, a Catalan with international experience and an international view, there’s something in the way he behaves that makes him something more than a player, even if he admitted this week that he sometimes “oversteps the mark,” even if he quite enjoys winding people up, even if some do dislike him. The conviction with which he speaks — whether you agree or not, and often you won’t — or the clarity and depth of his analysis. The willingness to speak at all, even if at times it might not be smart to do so, even if there are moments when it might even be counterproductive.

On Wednesday night, the most startling revelation from his interview with El Larguero was that some of the players were prepared to delay being paid in order to help Barcelona comply with financial fair play and still sign Neymar. It was striking that they would do such a thing; it was more striking that Pique admitted it, and maybe even more striking still that they’d felt emboldened to suggest it, to take a proposal like that to the president. Yet once you know that, it’s easy to imagine Pique in the middle, pushing, suggesting and seeking solutions. Going well beyond being a Barca player. Going direct to the president to whom he brought the shirt sponsor.

Pique’s boldness has not always been seen as a good thing. Recently, a column in El Mundo Deportivo — a paper in line with the presidency, a very clear occupant of a certain “trench” within the club’s war, part of a media group with a clear place in a socio-political battle too, and one that has recently embarked upon a crusade to turn attention and blame onto the players and away from the presidency — accused the squad of being too powerful, of overstepping the mark and, in a sense, of being responsible for all their ills. Seeing a hidden hand and all too aware of what lay behind it, Pique responded in kind. And in public.

At the end of their win against Getafe, he insisted: “We know the club, we know which papers are aligned to the club [and for “club,” read “board”], we know who writes certain articles even if it’s not their name in the by-line. We have to be united: not just the players but the fans, and the board too. We have to stay united because if not we’ll hurt each other.”

A few years ago, Pique had said something similar to the UK magazine World Soccer. “There are some things that don’t seem to change and the entorno [“environment’] is one of them, a hangover from being a small club. It can never be good for a club to be divided. This doesn’t happen at Madrid. At Madrid, they support the man in place and they support him to the death. In Barcelona, our culture is different. I hope with time we will realise that we have to all move forward together. Some of the other issues we’ve had have been overcome by success, but that remains.”

In all probability, so will Pique. And then maybe he will have the chance to change that culture and build lasting bridges.

His playing contract runs until he is 35 (he turns 33 in February), although he said this week that he has to go year by year, that he doesn’t know how long he will last. He also said that he’s too busy to be president just yet, that this isn’t something for the short or medium term. “I want to do it at a time when I can give it my heart and soul,” he said. In the long term, that business, far from preventing him reaching the presidency, might get him ready for it. Besides, the statutes don’t allow him to go straight into the presidency after he has finished playing. They do allow him to begin a process that facilitates that, though.

And while this might be facile or too easy a conclusion to draw, it’s tempting to see this as part of a plan, an education. A trial run. As Pique sees out another busy week sitting there in the Barcelona directors’ box on Sunday in charge of a football club, watching both his teams play, it could be just the start of yet another journey that will take him back there one day.