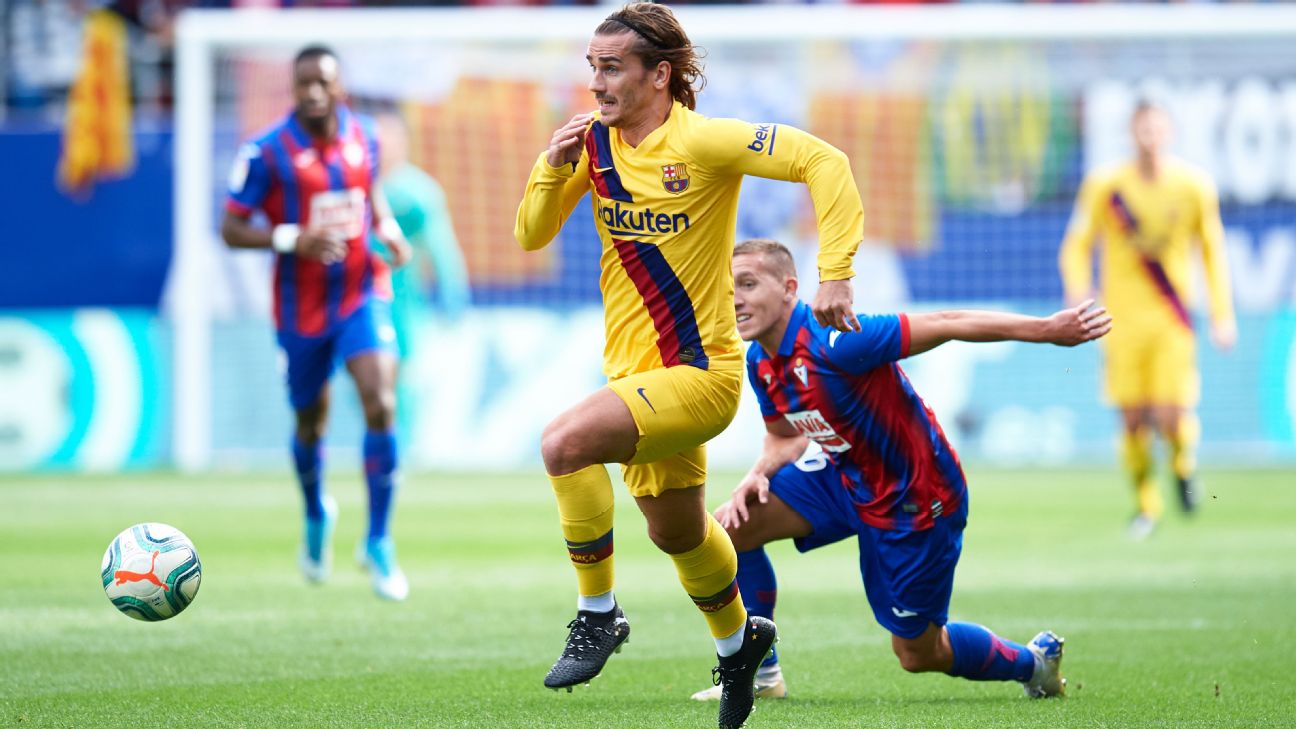 Antoine Griezmann, Lionel Messi and Luis Suarez were all on target as Barcelona beat Eibar 3-0 at Ipurua on Saturday to temporarily move top of La Liga.

Griezmann opened the scoring in the first half and then turned provider after the break. He set up Messi for the second with a clever touch and played a big role in the third, too. His defence-splitting pass sent Messi clean through, with the Argentine squaring for Suarez to top home.

The win takes Barca one point clear of Real Madrid with a far superior goal difference, although Zinedine Zidane‘s side can regain the lead if they win at Mallorca later on Saturday.

Barca have sorted themselves out since the loss at Granada. They have now won five consecutive games in all competitions and, just as importantly, they’ve stopped conceding so many goals. After failing to keep a clean sheet in each of their first six league games, they’ve now kept three in a row — and they were without Gerard Pique at Eibar.

Samuel Umtiti came in for the banned Pique. The France defender was making his first competitive appearance for Barca in over five months. His return from injury adds much-needed depth and competition to the backline.

There were also positives up the other end, with Griezmann, Messi and Suarez all on target and linking well.

Barca lost Sergi Roberto to injury at the break. The versatile player will undergo tests on a knee problem over the weekend to determine the severity of the problem.

Elsewhere, Eibar rarely troubled Barca, but when they did it came from stray passes in midfield. Sergio Busquets was especially culpable, but there was also a “what-have-I-just-done?” moment from Arthur Melo.

7 — Teams often struggle at Eibar but you never got the impression Barcelona would lose this game. For that, Ernesto Valverde deserves credit in setting up his team to nullify the home side’s pressing.

GK Marc-Andre ter Stegen, 6 — The fact he had to make no real saves of note demonstrates how well Barca dealt with Eibar at the back.

DF Sergi Roberto, 5 — Taken off at half-time after a very average first half. Was too loose on his man.

DF Samuel Umtiti, 7 — Considering this was his first start of the season following injury issues, the France international can be very pleased with his performance. Barca need him to stay fit this season.

DF Clement Lenglet, 7 — Another solid display on his return from suspension. Defended well but also set up the first goal with a lofted pass over the top.

DF Jordi Alba, 6 — A little bit rusty after a month on the sidelines but improved as the game went on.

MF Sergio Busquets, 6 — Scrappy on the ball and, whisper it, perhaps the weak link in Barca’s midfield at the moment. That said, he was far from a disaster here if you ignore his misplaced passes in the first half.

MF Frenkie de Jong, 8 — Given an ovation by the home fans when he was taken off. He was that good. He was everywhere. He is really growing into his more advanced midfield role and played a brilliant ball in the build-up to Messi’s goal.

MF Arthur Melo, 7 — Has established himself in Valverde’s first-choice midfield and you can see why: keeps the ball well and, above all, is now looking forward more. Did make one stray pass in the first half, though.

FW Lionel Messi, 8 — Still finding his rhythm following an injury-hit start to the campaign but he’s getting there. Took his goal well, should have scored another in the first half, and patiently waited for Suarez to set up the Uruguayan for Barca’s third.

FW Luis Suarez, 6 — Scored his seventh goal of the season from close range to take his Barca tally to 184. He’s now tied with Josep Samitier as the fourth top scorer in the Catalan club’s history.

FW Antoine Griezmann, 8 — Involved in all Barca’s best moments. Scored his first goal away from Camp Nou this season to open the scoring, set up Messi with a really nice flick and his superb pass was the key to the third goal.

DF Nelson Semedo, 6 — Replaced the injured Roberto at the break. He wasn’t able to attack as much as he would have liked but did his job well.

MF Arturo Vidal, 6 — Just got 20 minutes at the end in place of Arthur.

MF Ivan Rakitic, NR — Only given the final five minutes as he continues to fight for his future at the club.