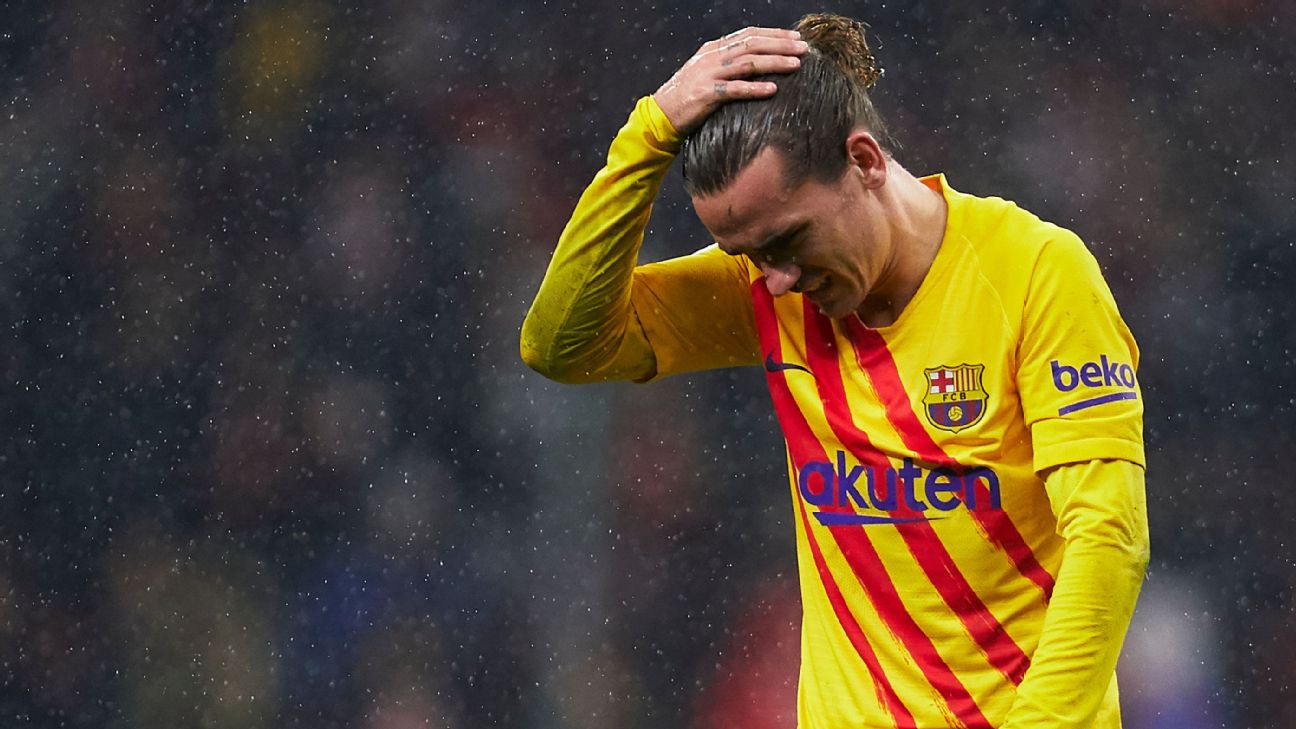 MADRID — “You wanted to have a name and you forgot to be a man,” the banner read. Raised by fans in the Wanda Metropolitano’s Fondo Sur in the pouring rain, midway through the second half of a thrilling game that ended in a late 1-0 victory for Barcelona over Atletico Madrid, there was little doubt of the intended target.

Like every player with more than 100 games for the club, Antoine Griezmann has a plaque outside this stadium. The weather meant the Promenade of Legends was deserted as the Barcelona bus pulled up on Sunday. Deserted, that is, except for a trio of toy rats left on the spot that marks the five seasons Griezmann wore an Atletico shirt.

The French forward’s €120 million summer transfer to Barca made fans in the capital angry — really angry. It wasn’t just the move itself. Twelve months after Griezmann had pulled the plug on the same deal in his infamous The Decision documentary, it was the feeling that Griezmann had to join Barcelona to eat at the table of Lionel Messi and Cristiano Ronaldo, as he himself once put it; it was the suspicion that a deal likely had been struck while Atleti were still competing for trophies against his new employers.

Deafening whistles greeted Griezmann’s name as it was read out over the Wanda Metropolitano PA, matching or even exceeding the Bernabeu’s reaction to Gareth Bale last weekend. His first touch was met in a similar fashion, as he adopted his now customary position on the left wing, and again a few seconds later, as he hugged the left touchline even more closely.

Griezmann’s role is different now. He is a big-money signing — albeit cheap considering his quality and the state of the market — that must be squeezed into a Barca team that revolves around Messi. He was Atletico Madrid’s star, their marquee player.

“History and the numbers speak for themselves,” Atletico manager Diego Simeone said before Sunday’s game. It’s hard to argue.

Griezmann has scored more goals at the Wanda Metropolitano (29) than any other player. He was key to Atletico reaching the Champions League final in 2016, eliminating Barca along the way, and winning the Europa League in 2018. He scored 133 goals in five years at Atleti, establishing himself as the best player in La Liga outside of Messi and Ronaldo. But for him, it wasn’t enough.

Now he has the chance to eat at the same table as Messi and Ronaldo. Literally, in Messi’s case.

“We’ve had dinners together,” Griezmann revealed this week, speaking to UEFA about his Barca adaptation process. “What happens off the pitch can only help us do well on the pitch.”

So far, on the pitch has been the problem. Messi only passed once to Griezmann in Barca’s 2-1 win at Leganes last weekend. Both players scored against Borussia Dortmund in midweek, but a sense of disconnect remains. Sunday”s performance was Griezmann’s Barcelona career to date in miniature.

A breathless first half often passed him by. His best moment came with 36 minutes gone, winning the ball in central midfield and exchanging passes with Luis Suarez, whose snap shot flew just wide. Two minutes later he was shoved off the ball by Koke in the centre circle and sat looking perplexed on the wet turf, his pleas for a free kick waved away by referee Mateu Lahoz.

There were moments of frustration with his left-sided partner Junior Firpo, too, Griezmann pointing to exactly where he wanted to receive the ball, moments after he hadn’t. Griezmann is keen to impress, perhaps overly so. He sometimes appears to be trying too hard, over-thinking every move.

“It’s a new position for me on the left,” he said this week. “I still haven’t gotten used to the movements of Luis, or Leo or Ousmane [Dembele].”

Griezmann’s glitter-throwing goal celebrations and documentary films might lead you to believe he’s an extrovert. He isn’t. He is shy and sensitive, not the kind of character who relishes a night like this, with sporadic, energetic chants of “Griezmann die” from the Atletico ultras.

With almost 20 minutes remaining, a chance came. Barcelona broke, Messi embarking on a mazy run, resisting repeated Atletico attempts to bring him down. The ball fell to Suarez on the left, who played it first time to Griezmann in space on the right. He volleyed confidently, first time, over the bar.

Messi could have passed to him in the buildup to the game’s only goal, opting instead to bounce the ball off Suarez before scoring a quintessential Messi curler into the bottom corner, Griezmann’s contribution limited to a decoy run from left to right.

He played the full 90 minutes, and at the final whistle did not hurry off the pitch, taking time to embrace current and former teammates. Nonetheless, he was still the first Barcelona player to disappear down the Wanda Metropolitano tunnel.

It was Barcelona’s night, but it wasn’t Griezmann’s.

Armas joins Marsch’s staff at Leeds United
Which of the world’s top strikers have scored more goals in a game than Mbappe’s five?
Saudi league planning for Messi to join Ronaldo if he leaves PSG
Fashion faux pas: Gnabry slammed for Paris trip
Arsenal in control of title race, but tougher tests are to come