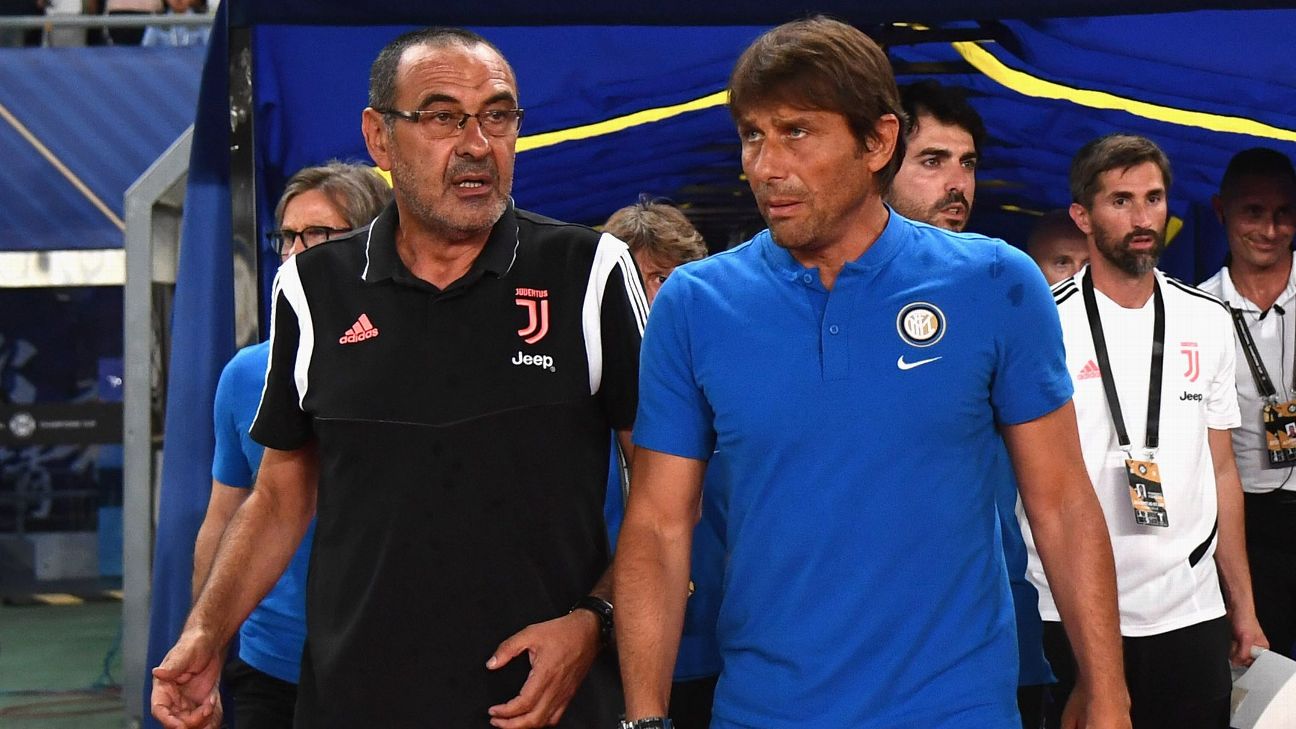 Antonio Conte admits that facing Juventus, the team he captained and coached, will be “emotional.” How could it be any other way after 17 years in black and white? But when the Derby d’Italia kicks off on Sunday (stream live on ESPN+, 2:45 p.m. ET), the Inter coach claims the moment will pass and his old club will become “just another opponent.”

In the away dugout, Maurizio Sarri cannot boast the same connection. He’d have to have been living under a rock, though, to fail to appreciate the significance of this game to both sets of supporters. The Tuscan is spot on when he says “Juve-Inter isn’t a game like the others” but the anticipation for this one is even higher than usual.

Inter have made a perfect start to the season in Serie A, taking maximum points from the opening six games for the first time since 1966 — a season that ended in heartbreak. Juventus, still undefeated, are only two points back and chasing. Both are playing well, and while the game comes in early in the season, Sarri, and particularly Conte, have had time to impose themselves on their teams.

It is the closest Juventus and Inter have been to each other heading into a Derby d’Italia since December 2017, the last time the Nerazzurri were alone at the top of the table. Unlike then, there is a confidence and conviction that they can go the distance this season. Conte’s reputation as a serial winner, the best Inter summer transfer window in years and the radical nature of Juventus’ makeover under Sarri, have led to a feeling that the playing field is more level than in recent years. Unlike Rudi Garcia’s Roma and Sarri’s Napoli, who emerged as surprise contenders, Conte winning the league would match expectation and the standards he sets himself.

Inter’s start has only reinforced the conviction that Sarri will be given little margin for error in his first season at Juventus. In England, Conte figured things out quicker than Pep Guardiola at City, Jose Mourinho at Manchester United and Jurgen Klopp at Liverpool. By the time they got settled in their new jobs, his Chelsea side were already out of sight.

As such, the onus is on Sarri, still yet to win a major league title, to show he can not only keep Juventus at the top but validate the club’s decision to repudiate its own mantra — a credo Conte and Massimiliano Allegri lived by.

Winning is no longer the only thing that counts to Juventus. How you win does, too. A draw this weekend will be easier for Conte to spin as progress given the ground his new club have had to make up on Juve since they last won something in 2011. It would also keep Inter top. Conte will go for the jugular though, which brings us to the main peculiarity and source of greatest curiosity around this game.

Whose side are you on?

At the launch of Inter’s new third kit last month, supporters sang a familiar song. “Chi non salta Juventino e! e!” Who doesn’t jump is a Juventus fan. All eyes were on Conte. His feet did not leave the ground.

Memories of his reaction when the Juventus side he captained beat Inter to the title on the final day of the 2001-02 season die hard. “There’s little to say, other than we’re loving it,” he said. “This is for the bitterness we felt in Perugia [in 2000] and there’s someone who was in Perugia that day who is watching.” That someone was an Inter legend in the making, Marco Materazzi, who admonished Conte for a lack of class and suggested Juventus use their winnings to buy him a toupee.

Conte has set old allegiances aside. He is a professional, and caused some consternation as coach of Juventus when he said he’d have no problem whatsoever working for Inter one day in the future. He likes to say he becomes the No. 1 fan of whoever he works for (Lecce born, we shouldn’t forget he coached Bari) and the coolness between Juve and Conte since he left helps a little too.

The 50-year-old has always loomed as the biggest threat to his old club. His decision to suddenly resign in 2014 when preseason had already started, limiting Juventus’ time and choice to line up a successor threatened to compromise everything. That it all worked out well in the end under Allegri did not change that, and the frostiness has still not completely thawed.

Now he is charged with taking a sledgehammer to the house that he built with Beppe Marotta, the former Juventus chief executive who was ousted in a reshuffle a year ago and is now heading up Inter’s recruitment. Pavel Nedved, Juve vice president, raised eyebrows last December when he said of Marotta: “He’s a pro, but maybe he never was a Juventus fan.”

The sight of Sarri chewing on a cigarette filter as he stalks the Juventus technical area is every bit as odd as seeing Conte on the Inter bench. When linked with them in 2017, Sarri said: “I’ve called my lawyer to see if there are grounds for legal action.”

After encouraging his Napoli players to “storm the palace” and overthrow the establishment, Sarri now works for them. It’s as if Che Guevara married into a royal family.

Pushed out by Juventus last year, Marotta is now in competition with his prodigy Fabio Paratici, who, credited with signing Cristiano Ronaldo, was promoted in his place.

The pair worked together for 15 years and the split has not been without tension. Paratici’s revelation that he wanted to “cause complete chaos” by giving the impression Juventus intended to sign Mauro Icardi — “obviously not my real objective” — was uncalled for and “out of place” in Marotta’s opinion.

Juventus were perceived to be making life hard for Inter over the summer: first by trading Leonardo Spinazzola for Luca Pellegrini, which meant Roma were no longer under financial fair play pressure to sell Edin Dzeko to the Nerazzurri, then by the sudden and inexplicable attempt to hijack their €80m move for Manchester United striker Romelu Lukaku.

When the window closed, it felt like the master (Marotta) had taught his pupil (Paratici) a lesson. Juventus may have bought well, but that’s only half the job. Marotta not only signed Lukaku, Stefano Sensi, Nicolo Barella and Diego Godin, he managed to offload Icardi, Radja Nainggolan and Ivan Perisic. Selling did not go as well for Paratici, who tried and failed to move on Paulo Dybala and Mario Mandzukic among others, leaving Juventus and Sarri with a big squad to keep happy and a balance sheet redder than they perhaps would have liked.

And the academy award for best director goes to …

Juventus and Inter use deep-lying playmakers in the best tradition of the regista role. Miralem Pjanic has made headlines for scoring from outside the area in back-to-back games, but his evolution in front of the defence continues apace under Sarri.

Juventus’ new coach wants him to have 150 touches a game and his passing is more incisive than under Allegri, who wanted the Bosnian to get the ball out wide. Now Pjanic has more angles to play with and more teammates taking up narrow positions between the lines up ahead.

Conte, meanwhile, has benefited from the work predecessor Luciano Spalletti did in the past 18 months in converting Marcelo Brozovic to a similar role. The 26-year-old has matured and is more careful on the ball, but the safety net of three centre-backs behind the Croatian has also encouraged him to be more daring. Sensi’s arrival means Brozovic has someone as good in possession to take some of the attention away from him, not to mention a reference point to play to between the lines.

Aaron Ramsey missed a lot of preseason recovering from the injury he suffered in Arsenal’s Europa League quarterfinal against Napoli in April. Sarri’s tendency to pick an XI and stick with it didn’t bode well for a new signing who wasn’t fit for the start of the campaign. But Ramsey has not only scored a debut goal and carved out a place for himself in the team, he has persuaded Sarri to experiment with him as a No. 10 in a 4-3-1-2, the implementation of which has coincided with Juventus playing better football, scoring more goals and conceding fewer.

His impact has not been as great as Sensi’s for Inter, though, with the 24-year-old emerging as a star of the best midfield the club has had since the Treble in 2010.

Weirdly, they could have been playing together against Inter on Sunday. Lukaku scored on his debut and has three goals in six games, including a fine header in the Milan derby, without playing particularly well. A limited preseason, a bad back and now an issue with his quad have held back the overall performances of the Belgian striker. Inter need him to recover in time given Alexis Sanchez is suspended.

Ronaldo, on the other hand, has found the net nine times in nine games for club and country this season. He has scored in every Juventus home game and set up gilt-edged chances for Ramsey and Sami Khedira that weren’t taken against SPAL. It helps that Gonzalo Higuain and Dybala, the assist man for his past two goals, are creating chances for him.

Still Ronaldo has cut a frustrated figure at times, as was the case in Florence and before his goal last weekend. When Juventus’ passing game hasn’t functioned, he’s looked isolated. When it has worked, he hasn’t always been a participant; the team can get caught in the moment of some of Sarri’s mesmeric passing patterns going wherever the game takes them, which isn’t always to him.