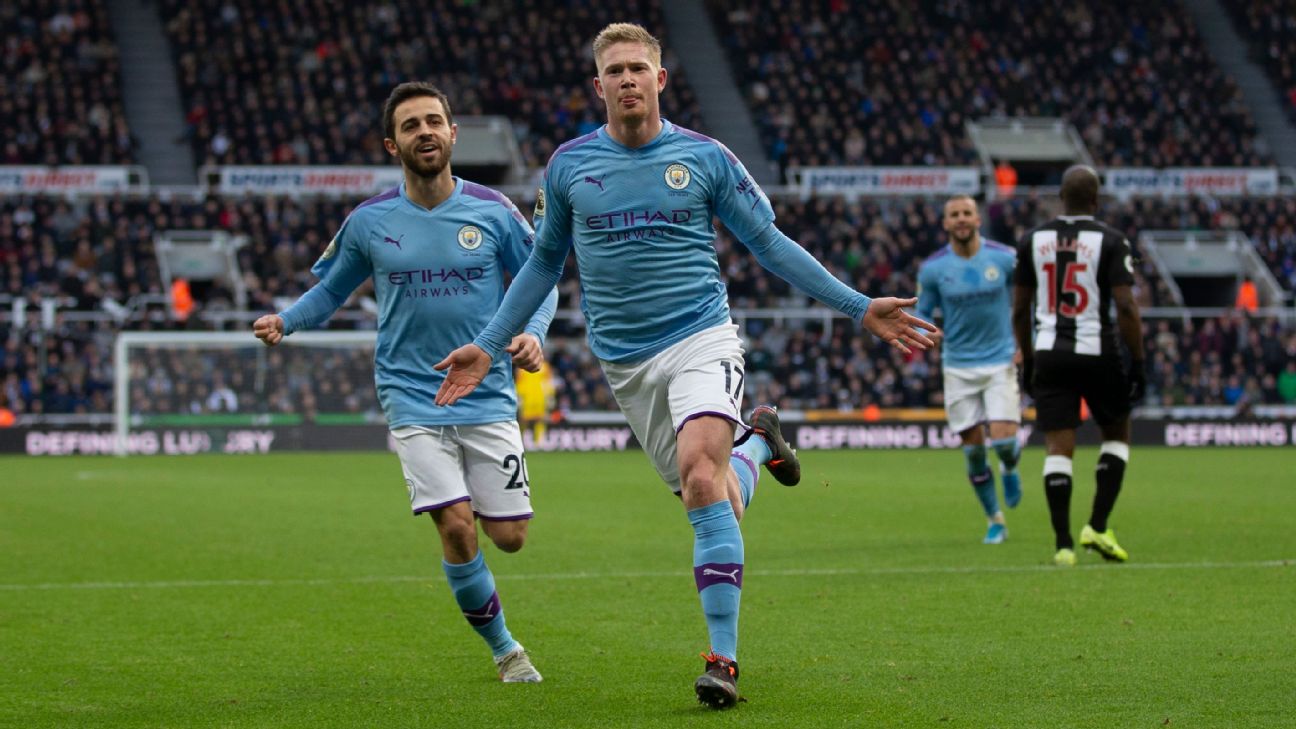 Manchester City’s push for the Premier League title hit a huge stumbling block as they were held to a 2-2 draw by Newcastle United at St. James’ Park.

Raheem Sterling gave City an early lead midway through the first half, only for Jetro Willems to equalise not long after.

Kevin De Bruyne scored a fantastic late goal to seemingly give the champions all three points only for a Jonjo Shelvey effort to ensure that they shared the spoils leaving Liverpool with the opportunity to go 11 points clear later on Saturday.

Man City certainly know how to keep possession well, especially in the middle of the park, and they were able to dictate the tempo of the game as a result of that.

Their patient high line allowed them to force Newcastle back into uncomfortable positions, and they always seemed to counter in a manner that opened the hosts up at the back.

The aerial threat continues to be a big problem for City as they just aren’t capable of bringing the ball down well enough or handling with attacking threats that stem from that.

There was a certain hesitation to pull the trigger at times throughout the game, and it was almost as if they showed Newcastle too much respect when they were on the ball.

5 — Pep Guardiola set his team up to be far too narrow, which seemed to play into Newcastle’s hands more than he probably realised it would.

His arrogance in attempting to go for the kill late on instead of sitting on the lead cost City and they appear to be getting found out in the sense that they just don’t really have a Plan B.

GK Ederson, 6 — Couldn’t do much about Newcastle’s goals, and aside from that, he was solid enough and didn’t serve as a detriment to City’s game.

DF Kyle Walker, 5 — Drifted into the middle far too often and still struggles with lapses in concentration — especially from a positional point of view.

DF John Stones, 5 — Was painfully out of position for Newcastle’s first goal and still seems to showcase the sort of form that indicates he will not develop into a world class defender.

DF Fernandinho, 6 — Desperately needed a bit higher up the pitch for City. Was still decent at the back and isn’t the worst cover in the world, but will be glad to return to a DM position. Lucky not to be sent off.

DF Benjamin Mendy, 5 — A really poor defensive display from Mendy from bad decision making to clumsiness that could have cost City on another day.

MF Kevin De Bruyne, 8 — The king of perfectly weighted passes was able to strike again, this time with a sublime finish to give City the lead with their second goal.

MF Ilkay Gundogan, 6 — Got away with a few silly moments, and aside from that there was nothing within his performance that will inspire supporters to believe that he’s turned a corner.

MF David Silva, 7 — Keeps things ticking along nicely and has bursts of brilliance, with the decision to bring him off being a questionable one for many City fans.

FW Riyad Mahrez, 6 — Struggled to really get into the game. His lack of passing ability leaves a lot to be desired, and when he isn’t on form, he’s more of a liability than anything else.

FW Gabriel Jesus, 5 — Had some nice ideas early in the game but completely went missing for the second half and never really got a sniff.

FW Raheem Sterling, 7 — Produced a really nice finish to give City the lead and seemed to cut inside at will. However, missed a golden opportunity to win it for City.

MF Phil Foden, N/A — Couldn’t really make much of an impact and continues to struggle to return to top form.

AMF Rodri, N/A — Was nowhere to be found for large portions of his brief stint on the pitch.

FW Bernardo Silva, 6 — Should have done better with the opportunities that came to him and was generally unable to influence the game.