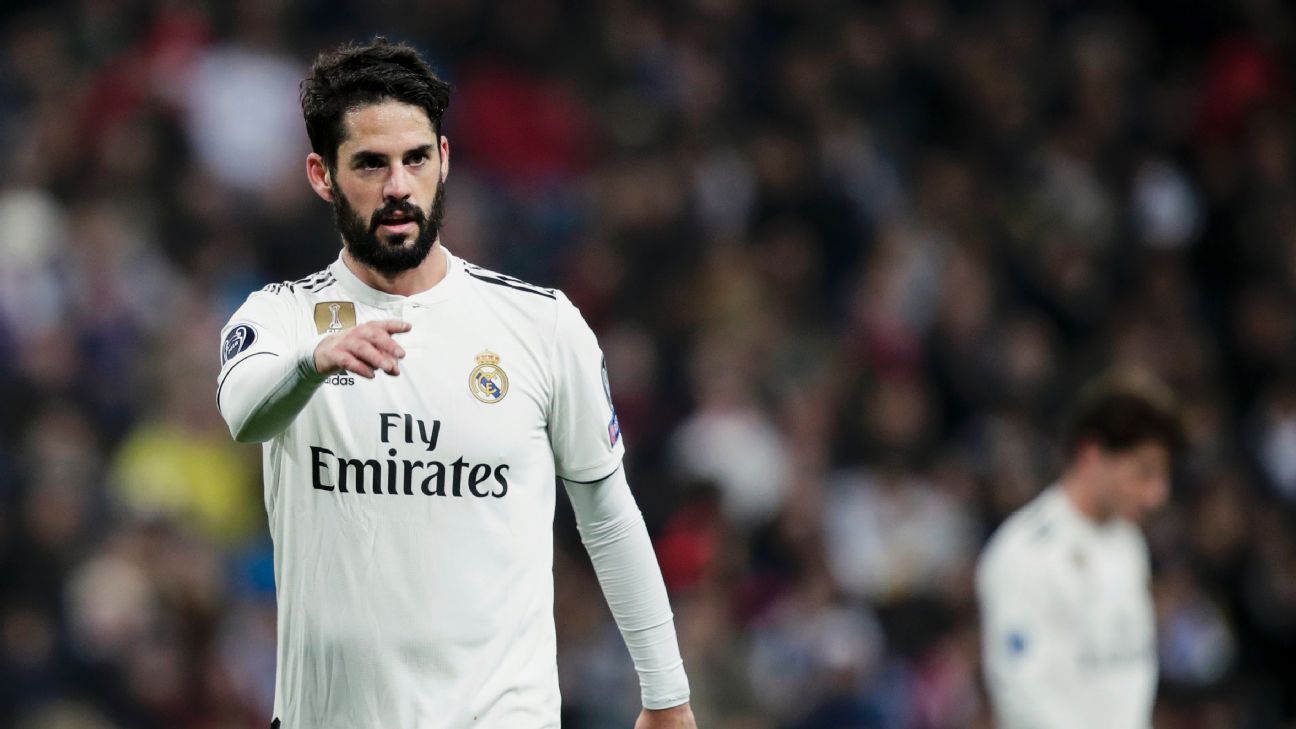 Real Madrid are certain that Premier League duo Arsenal and Manchester City are interested in snapping up Spanish attacking midfielder Isco, according to AS.

The 27-year-old, who has been heavily linked with a move to Tottenham Hotspur in recent weeks, could now be the centre of Unai Emery and Pep Guardiola’s attention.

It is reported that Guardiola deems Isco to be an ideal long-term replacement for the departing David Silva — who is expected to leave the Etihad Stadium at the end of this season despite having no immediate plans yet.

Isco’s arrival in England could open the door for Christian Eriksen to move to the Bernabeu, with reports suggesting the Dane is one of the club’s top transfer targets, despite manager Zinedine Zidane wanting Manchester United’s Paul Pogba instead.

14.04 BST: Ajax goalkeeper Andre Onana has been speaking to RMC Sport about a possible move.

“There was feedback from PSG,” he said. “I had discussions with my agent. He told me about Paris and what they wanted to do. Whether that was a swap with Alphonse Areola will stay in the professional realm. My agent handles these things. We spoke a few times and he told me PSG were interested.

“Barcelona came back in for me this summer. It is home to me. I was part of the club. Logically, they are always keen to repatriate their own. Perhaps it was not the right time to go back, and maybe I will never go back! This summer, though, was not right for it.”

13.14 BST: LAFC striker Carlos Vela is wanted by Al-Ahli, according to reports in Saudi Arabia.

Vela, 30, has been in MLS since 2017 and has scored a hatful of goals. The Mexico international has the small matter of an ‘El Trafico’ vs. LA Galaxy and Zlatan Ibrahimovic to get through in the MLS Cup semifinals, but this could be his last season in the U.S.

12.02 BST: Chelsea striker Tammy Abraham has hit the ground running this season and is in talks over a new £100,000-a-week deal, says the Daily Star.

Amazing what a few goals does for your confidence and your pay packet.

11.27 BST: Arsenal need a few solid defenders and, having already landed the 18-year-old William Saliba from Saint-Etienne over the summer before sending him back to Ligue 1 on loan, they are now in for RB Leipzig defender Dayot Upamecano, according to the Daily Mail.

Upamecano, 20, is one of the most highly-rated young defenders around and has a release clause that will drop to €60m in the coming months. Expect the Gunners to be involved.

10.40 BST: Barcelona have paid Atletico Madrid €15m to have the first refusal on Saul Niguez, Jose Maria Gimenez and three other academy players, with sources from both clubs denying the payment has anything to do with the Antoine Griezmann deal.

ESPN FC has learned that the deal was done in September and means that whenever Atletico receive an offer for the players included in the agreement, they must let Barca know immediately. The Spanish champions will then have the right to match the proposal.

10.03 BST: Tottenham have been pretty terrible recently but they are set to target Barcelona midfielder Carles Alena, according to Mundo Deportivo.

Alena, 21, had been tipped to become the heir to Andres Iniesta or Xavi in midfield, but hasn’t had many chances to shine and instead could move on.

09.21 BST: Patrice Evra has said he has held talks with Manchester United about returning to the club in a coaching role.

The former United captain retired from football in July and has been working on his coaching badges at United’s training ground.

08.36 BST: Barcelona and Neymar have failed to reach an agreement over a dispute based around a €43m renewal bonus included in the last contract the Brazilian signed with the club in 2016, sources have told ESPN FC.

Neymar received around €14m at the time and was due the remaining €29m on Aug. 1, 2017. However, Barca refused to pay the rest as the forward neared a world-record €222m move to Paris Saint-Germain. He eventually signed for the French club on Aug. 3, 2017.

A judge will now be tasked with resolving the case after lawyers representing both Barca and Neymar delivered their conclusions on Monday to the evidence presented at a hearing in September.

A return to Barcelona had seemed on the cards during the summer transfer window with the player and both clubs all open to a deal, but the parties could not reach an agreement before the deadline. However, sources have told ESPN FC that Barca but will make a renewed effort to sign Neymar next summer.

08.00 BST: Juventus and Atletico Madrid have joined Tottenham in monitoring West Bromwich Albion full-back Nathan Ferguson, according to The Sun.

Ferguson, 19, has broken into the West Bromwich Albion first team this season and has started all but one of the Championship leaders’ 12 league games so far.

It was reported at the weekend that Spurs are eyeing the England youth international. Tottenham sold Kieran Trippier to Atletico Madrid in the summer but have struggled to cover for the England international’s departure.

Mauricio Pochettino has tried fielding Serge Aurier, Kyle Walker-Peters, Davinson Sanchez and even Moussa Sissoko this season as he has alternated between a back four and using wing-backs but results continue to suffer.

The Sun reports that Ferguson, who is right-footed but has actually been playing at left-back for West Brom this season, is rated at around £10m.

Crystal Palace manager Roy Hodgson wants to add some firepower to his attacking options, and will consequently weigh up the option of bidding for Chelsea’s proven striker Olivier Giroud.

The Sun has reported that Giroud, 33, has already held talks with Blues boss Frank Lampard about a move away from Stamford Bridge having not started a game for Chelsea since August.

With his Chelsea contract set to run out next summer, the former Arsenal man just might be tempted by a move to Selhurst Park with the European Championships looming.

Palace fans might well be pleased by the club’s position in the Premier League table, but with only eight goals scored in nine games, they may enjoy another boost to the squad.

A peace agreement regarding Barcelona’s unauthorised talks with French forward Antoine Griezmann has been reached, according to El Mundo.

Barcelona were fined €300 (NOT A TYPO) for tapping up Griezmann, who signed for the club in the summer from Atletico Madrid, before his release clause was reduced from €200 million to €120m.

El Mundo’s report states Barcelona will pay Atletico €15m and the rights to negotiate for five agreed-upon players, which include Saul and Jose Gimenez.

– Polish striker Arkadiusz Milik is reportedly set to sign a fresh contract with Italian giants Napoli in a deal that will see him remain at the club until 2024. Calciomercato have reported that Milik, 25, will sign a contract this week off the back of his match-winning brace against Verona at the weekend.

– Reports from Tuttosport have linked Barcelona defender Samuel Umtiti with a move to Bayern Munich, amid their search to improve their back line.