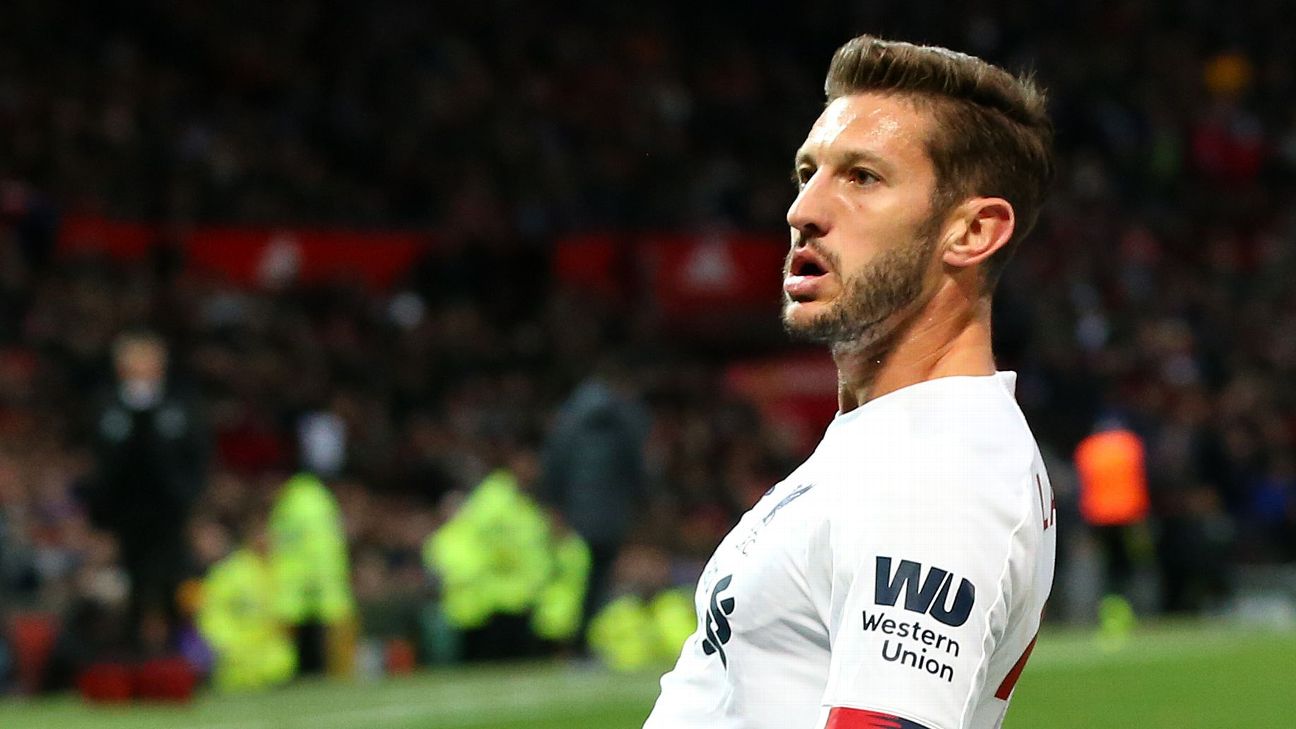 Liverpool midfielder Adam Lallana is being targeted by clubs in Major League Soccer and the Chinese Super League for a transfer as early as January, the Daily Telegraph reports.

Lallana, 31, is out of contract next summer and while he is set to be offered an extension by the European champions he could be tempted by the prospect of a more long-term deal by clubs in the U.S. or China.

Additionally, the top leagues in both of those countries have their seasons run from spring to winter, so a January move out of Europe would allow the England international a full preseason at a prospective new club.

Lallana has endured a difficult few years with injury problems, but he has featured in Liverpool’s last three games. He came off the bench to score the equaliser at Manchester United on Oct. 20 before playing the full 90 minutes in Wednesday’s Carabao Cup win over Arsenal and starting his first Premier League match since March at Aston Villa on Saturday.

08.41 GMT: FC Salzburg are yet to receive any offers for teenage sensation Erling Braut Haaland despite the striker being linked with virtually every top club in Europe.

Haaland, 19, is the Champions League’s top scorer after three games of the group stage this season with six goals, including a hat trick against Genk. In all, the striker has scored 23 goals in 20 appearances since moving to Austria from Molde in his homeland of Norway last year.

However, Salzburg chief Christoph Freund is quoted by the Daily Mirror as saying: “So much nonsense is written in the last few weeks. What I’ve already read makes me laugh. “I have not spoken to any club so far. I can also say there’s currently no offer for the winter [transfer]. The next step will come, because Erling will be unstoppable.”

Manchester United manager Ole Gunnar Solskjaer refused to be drawn on speculation linking Haaland with a move to Old Trafford when asked about his compatriot recently, saying: “I don’t think it’s the time now for me to talk about other team’s strikers. I spoke about Harry Kane and now Erling. I don’t think it’s right for me.”

08.00 GMT: Arsenal are distancing themselves from a possible move for Jose Mourinho, with Unai Emery still having the support of the club’s hierarchy, sources have told ESPN FC.

Mourinho would be keen to speak to Arsenal should Emery be sacked this season, sources have told ESPN FC, but a move for the former Chelsea and Manchester United boss appears some way off at present.

It was claimed that Mourinho met Raul Sanllehi, Arsenal’s head of football, for dinner recently, but sources have told ESPN FC that no such meeting took place. The two men have not seen each other for some time.

The future of Paul Pogba has been the source of almost constant speculation for the past 12 months — and it goes on. And on.

Pogba’s brother, Mathias, was a guest on RMC in France on Sunday and did little to dispel the notion that the French star will be playing his football elsewhere when his current deal expires in 2021 — and possibly long before then.

Pogba Facetimed his brother midway through the interview with RMC to voice his disappointment at the club’s 1-0 defeat to Bournemouth on the south coast on Saturday. Pogba hasn’t played since Sept. 30, when he aggravated an ankle injury in the club’s match against Arsenal, an injury that coincided with a mini-revival for United before Saturday’s shocker against the Cherries.

With Juventus and Bayern Munich reportedly circling for Paul’s services, Mathias straight-batted questions about his future.

“He continues to give everything for Manchester United. He has a contract with them. I can’t say any more,” he said.

So that’s that sorted then. Or maybe not.

— Both Milan clubs are set to try to lure Chris Smalling from Manchester United and rain on Roma’s parade. Goal Italia claims that the Serie A giants have been so impressed with the impact that Smalling has had in the Italian capital that they fancy bringing him north. All of which will be music to the ears of Smalling’s agent, who reportedly headed to Rome to seal a permanent switch for him last week.

— Manchester City starlet Tommy Doyle is set to sign a new long-term deal with the club in an attempt to stave off interest in the player from elsewhere. That’s according to Teamtalk, which claims that the 18-year-old grandson of former City legend Glyn Pardoe, will put pen to paper on a contract that will see him remain at the club long after 2021, which is when his current deal expires.