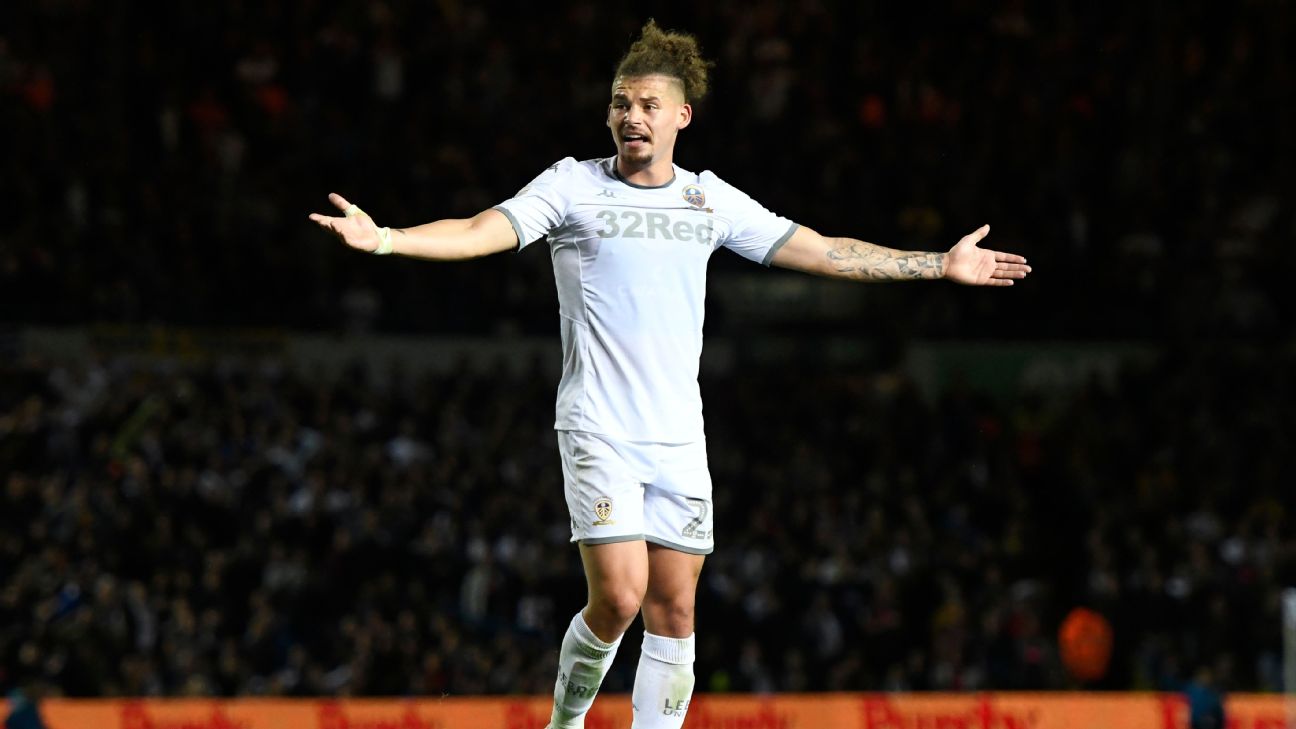 Manchester United‘s transfer policy is all about buying young and British, so the latest link from the Sun comes to a 23-year-old Englishman by the name of Kalvin Phillips.

Phillips has impressed in the Championship this season and last year Tottenham reportedly failed with a £27 million bid for the midfielder, shortly before he signed a new five-year contract in September.

Having been at Leeds since the age of 14, Phillips is settled but reports of interest from Man United could turn his head. Previously the clubs linked to him were the likes of Aston Villa, Sheffield United, Wolves and Burnley, so United have stepped it up a notch with coach Kieran McKenna scouting him against Preston last week.

10.21 BST: Chelsea’s young players have done well this season and Newcastle have spotted one that could help them.

The Daily Mail reports that the Magpies are keen to land full-back Reece James on loan once the window opens again.

09.47 BST: Tottenham have struggled so far this season and now they are in danger of losing one of their star players: South Korea forward Son Heung-Min.

Son. 27, is being tracked by Juventus and Napoli with a view to a move in January, according to the Daily Express.

09.00 GMT: There were reports last week that Bayern Munich were super keen on signing Man City striker Gabriel Jesus in a €100m deal.

The Sun claims that City would do business for a little more than that, with the price of £100m (€115m) being quoted. But what this means for Leroy Sane‘s potential move is unclear.

Mario Mandzukic seems to have been linked to most clubs in Europe in 2019 — perhaps most notably Manchester United — and now Marca is reporting that there’s another suitor on the scene, with Sevilla keen on the Croatia international. Mandzukic has struggled for game time under new Juve boss Maurizio Sarri and is holding out for a move away from Turin.

Sevilla are intent on bringing him to Spain, which is hardly surprising given the lack of goals flying in at the Estadio Sanchez-Pizjuan so far this season.

“We’re talking to Mario to find the best possible solution,” Juve chief Fabio Paratici said in a recent interview. “We’re open to any option. Whether he stay or goes, we want a solution to be found.”

Where that solution lies, though, is still unclear.

Saturday’s Transfer Talk revealed that Real Madrid were plotting a move that would send Gareth Bale and a ton of cash to Manchester United in exchange for Paul Pogba. Not so fast, though, according to the Daily Mail.

The outlet reports that United are set to snub Bale in the January window due to fears over his injury record after the club’s previous experience of signing players who aren’t in the first flush of youth.

The likes of Alexis Sanchez and Bastian Schweinsteiger endured nightmare spells at Old Trafford — and having had its fingers burnt in the past, the paper claims that the current regime would be reluctant to hand Bale an escape route from the Spanish capital.

Could Napoli star Fabian Ruiz be about to join Real Madrid in a swap deal that might divide opinion in the Spanish capital? Possibly, according to Mundo Deportivo. Ruiz has been in sensational form for the Serie A side so far this season, and now the Spanish newspaper is claiming that Los Blancos could be prepared to make a move for him — with Isco coming in the other direction.

The arrival of the latter would doubtless be welcomed by Napoli fans and probably the player as well, given his sporadic appearances under the current Madrid boss Zinedine Zidane. The news might not go down too well at Manchester City, though. Ruiz has been linked with a move to the Etihad in the past week.

The former Real Betis man was the standout player for Spain as they won the European under-21 tournament in the summer, taking home the player of the tournament award.

– Ivan Rakitic’s prolonged and somewhat painful exit from Barcelona could finally reach its conclusion in January. Spanish outlet Sport reports that Inter Milan met Barcelona last week to discuss the move. And despite speculation that talks didn’t go swimmingly, the paper claims that the deal will get over the line as a result of the Italians club’s excellent relationship with the Barcelona.

– Juventus can count on a prolonged tenure from Cristiano Ronaldo, according to Le10Sport, at least until he wins a major title with the Italian giants. The Portugal star has no intention of leaving Turin, despite rumours suggesting that he faces an uncertain future with the Serie A side. Ronaldo is clearly eyeing another Champions League title with the Bianconeri, and with Juve currently top of their group, he might not have to wait that long.

– Aston Villa’s Jack Grealish was impressive against Manchester City, despite the titleholders handing his team a thorough 3-0 hiding in the Premier League on Saturday. So would Pep Guardiola be interested in signing him? Well, according to the Daily Mail, Guardiola reckons the club couldn’t afford him even if they wanted to. “He’s a talented player who always creates something,” Guardiola said. “An exceptional player, but too expensive for Manchester!”