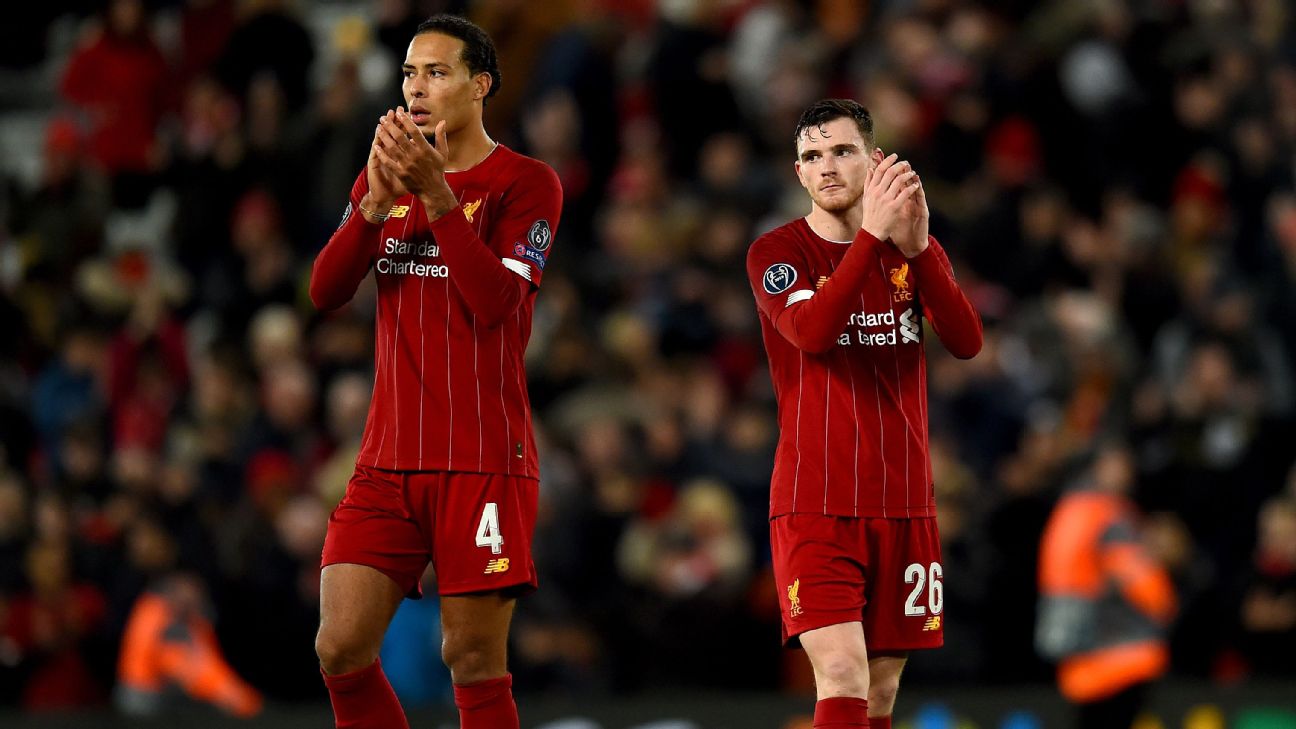 LIVERPOOL, England — For once, the late winner never came and Liverpool had to settle for a point. There will be some disappointment that they could not secure qualification from their Champions League group against Napoli at Anfield, but the truth is that this was the moment for a 1-1 draw if one had to happen at all.

Jurgen Klopp’s side are still in Europe and can still top Group E with a win or even a draw against FC Salzburg on the final group stage matchday. And if last minute goals are being rationed then Liverpool fans would much rather one against Brighton on Saturday or against Everton in the Merseyside derby four days later in the Premier League.

Defending the European Cup would be a wonderful achievement, but the priority this season is to win the Premier League title and end a 30-year wait to be crowned champions of England. What will not thrill Klopp, however, is seeing an already packed fixture list become that little bit more complicated.

“In [the Napoli] dressing room they feel like they are already through and maybe they are,” said Klopp after the match. “Everybody here thinks, ‘Oh my god, it will be tough’ and it will be tough, that much is clear.

“But I know how human beings are; people wished we could finish the group tonight and make kind of a holiday game in Salzburg.”

Now, instead of going to Salzburg to play out a meaningless game, Liverpool will need at least a point in Austria to make it to the knockout rounds in the new year. That match in Salzburg on Dec.10 is a week before they face two games in two days against Aston Villa in the League Cup and the World Club Cup semi-final in Qatar.

An injury to Fabinho, who limped off in the first half, is another worry. Klopp can not afford his squad to become too stretched at a crucial point in the campaign. Napoli have the easier assignment in the last round of fixtures with a home game against Genk, who have mustered a single point from their five games.

The Italian side travelled to England in turmoil, seventh in Serie A, without a win in a month and with their president, Aurelio De Laurentiis, threatening to fine the entire squad for failing to attend a training camp. Still, they arrived in the mood to spoil, defend and counter and almost became only the third team to beat the reigning European champions home and away in the group stage of the Champions League. Klopp said beforehand he expected “a proper fight” and he got one.

The first half began with Alisson, usually so good with the ball at his feet, punting a pass into the stands after 20 seconds and ended with Klopp booked for dissent by referee Carlos Del Cerro Grande and Dejan Lovren arguing with the Spanish official as he headed down the tunnel.

For 45 minutes in between, Napoli managed to edge Liverpool out of their comfort zone in way very few teams have been able to do over the last two seasons. It did not help that Fabinho, so often the quarterback in front of the back four, was forced off with an injury after 19 minutes.

“It’s early and we all hope it’s not too serious but it’s pretty painful and in an area you don’t want to have pain, around the ankle,” Klopp said of the Fabinho injury.

Two minutes later, it was 1-0. Virgil van Dijk looked to have been fouled by Dries Mertens but with play carrying on and the Dutchman on the floor in the centre circle, Giovanni Di Lorenzo clipped his pass over the top for Mertens to lash a first-time finish inside the far post.

Liverpool fans were left even more frustrated from the fact that the goal wasn’t given until two separate VAR checks had taken place — one reviewing Mertens’ challenge on Van Dijk and another for offside.

Van Dijk was clearly at odds with the decision, telling BeIn Sports after match: “I won the ball. Obviously I think he [Mertens] didn’t even want to challenge the ball at first, so he touched me.

“I think it’s a foul, the referee didn’t have his best day today, and that is what it is. Obviously it’s a pity to concede and the way we conceded as well, but we had to do what we planned to do and I thought the second half was good.”

From that point on Carlo Ancelotti, the last manager to win at Champions League game at Anfield after leading Real Madrid to a 3-0 win in October 2014, was happy to let his team sit back and break.

All Liverpool had to show for a first half lacking the usual spark was a tame Van Dijk header and a James Milner effort that was saved at the near post by Alex Meret but the loud boos that reverberated around Anfield at the half-time whistle were for Del Cerro Grande rather than their team.

The second half was spent camped in Napoli’s half.

Roberto Firmino hooked a loose ball towards goal but saw it cleared off the line by Kalidou Koulibaly before the Brazilian headed wide at the far post after being teed up by substitute Alex Oxlade-Chamberlain. Liverpool kept knocking and Napoli’s light blue shirts sank deeper and deeper towards the Kop until they were almost in the front row.

Eventually it paid off. With 25 minutes to go, Milner whipped in a corner from the right and Lovren took a run from the edge of the box to head past Meret. Another VAR check, this time for a supposed push from Lovren on Mertens, brought more boos until Del Cerro Grande pointed to the halfway line.

From there, the expectation was for yet another late show. Liverpool have scored goals in the 75th minute or later in seven of their last nine games but Napoli, to their credit, resisted. Georginio Wijnaldum flashed a volley wide but that was as close as they came.

There’s work to do to make the Champions League round of 16, but the late winners, for now, can be happily saved for the league.