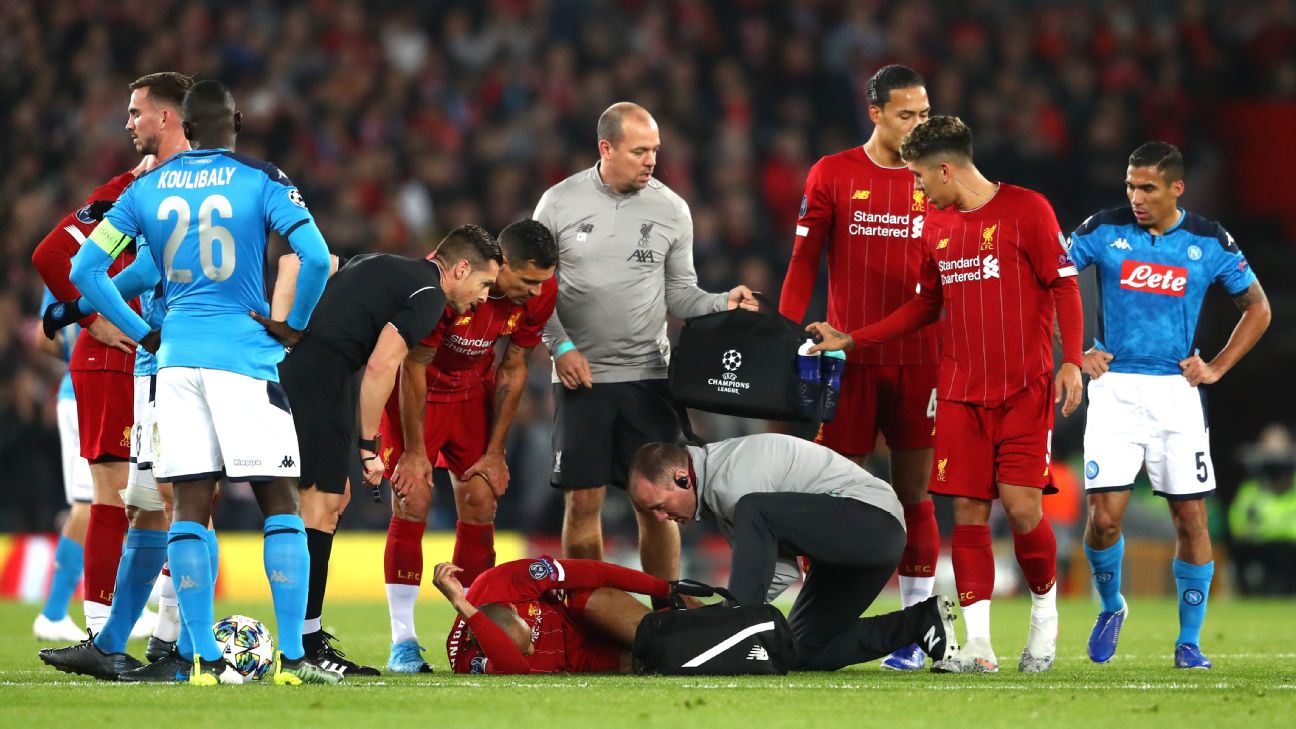 LIVERPOOL, England — Jurgen Klopp has admitted Liverpool are sweating on the fitness of Fabinho after the midfielder suffered an injury during the draw with Napoli on Wednesday.

The Brazilian limped off after 19 minutes and was replaced by Georginio Wijnaldum as Liverpool were made to wait to guarantee Champions League qualification as they were held 1-1 by the Italian side at Anfield.

“He couldn’t continue, and he is a really hard one. I don’t want to say what I expect, because I hope that it is not that serious, but we will know more, maybe tomorrow [Thursday] maybe the day after. We will see.”

Liverpool are still top of Group E after the draw with Napoli — earned after Dejan Lovren canceled out Dries Mertens‘ opener — but need at least a point against Red Bull Salzburg to secure their place in the knockout rounds.

The trip to Austria comes a week before Liverpool face two games in two days, with a League Cup tie against Aston Villa and the start of their World Club Cup campaign in Qatar.

“It was clear that we wanted to finish it tonight,” said Klopp. “We knew long before the game that it would be difficult against Napoli. It was difficult last year, it’s always difficult. They’re a good side.

“Two things that shouldn’t have happened. They scored and Fabinho got injured. One problem we could solve with Gini, who played a really, really good game, but the other one caused us a problem.”

Liverpool went behind on 21 minutes thanks to Mertens’ smart finish but couldn’t find a winner after Lovren’s header had equalised 25 minutes from time.

The home side had 15 shots and 10 corners but Napoli dug in to earn a valuable point.

“Napoli were up for a proper fight, and whoever sees Napoli play usually, this was a different approach tonight — scoring a goal and defending with all they have,” said Klopp.

“We had to increase pressure, and we did. The last 15 minutes of the first half was good, like it should be. Second half, it was this normal game when you play against a quality side who defends with all they have.

“The problem was we had the wings open, we tried to use them with the crosses, but we crossed the ball too early most of the time. That’s why the goalie caught so many balls.

“We scored a goal, a really nice one and then we continued to chase the game. But it didn’t work out for us, and that’s how football is sometimes. You don’t always get the results you want.”