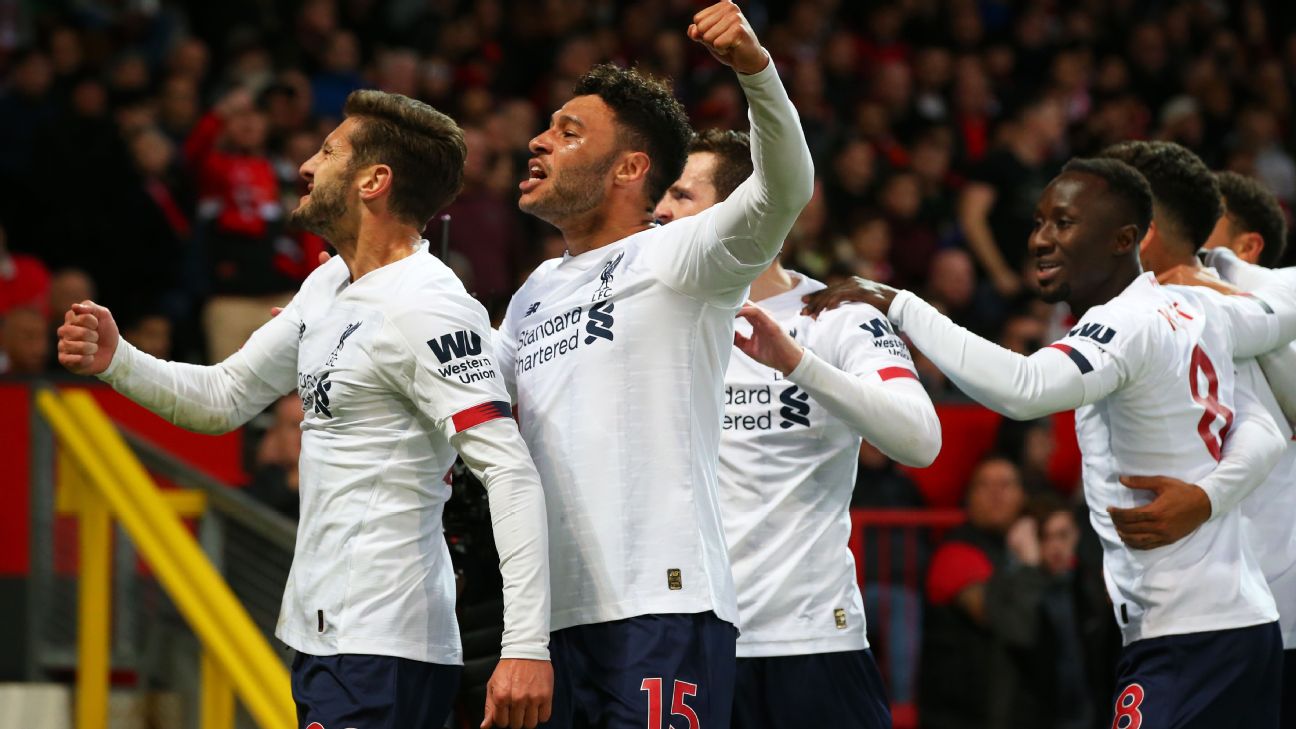 Liverpool’s perfect start to the Premier League season was ended as they were held to a 1-1 draw by Manchester United at Old Trafford.

It was a welcome return to the side for goalkeeper Allison, but it was a day short on positives for Jurgen Klopp’s team, who were unable to restore their eight-point advantage at the top of the table.

The Champions League winners looked nervous in possession as they were harried by an energetic United frontline and midfield. Meanwhile, the home side’s effective use of wing backs pinned back Liverpool duo Andy Robertson and Trent Alexander-Arnold, cutting off a vital supply line to a front three that saw little of the ball.

6 — It was always going to be a tough job for Klopp to fill the void left by Mo Salah’s absence, but his introduction of Adam Lallana ultimately clinched his side a point that many will argue they didn’t deserve.

GK: Alisson, 6 — A couple of rusty moments on the Brazilian’s return to the Liverpool lineup, but could do nothing about Marcus Rashford’s opener from point-blank range.

DF: Trent Alexander-Arnold, 6 — United’s aggressive wing-backs made it difficult for the England man to get forward to support an isolated Sadio Mane. Nearly found the net from distance late on with a well-struck volley that flew just over.

DF: Joel Matip, 5 — Caught out by superb movement from Rashford for the game’s opening goal, and that wasn’t the only time the former Schalke man was troubled by the goal scorer’s searing pace.

DF: Virgil van Dijk, 6 — A vital interception denied Andreas Pereira a certain tap in on the half-hour, but should have got closer to Daniel James as the Welshman crossed for Rashford’s first-half opener.

DF: Andy Robertson, 6 — The more adventurous of the Liverpool full-backs, but found it hard work getting around the solid Aaron Wan-Bissaka. Provided a teasing, bouncing cross for his side’s late equaliser.

MF: Fabinho, 5 — An off-colour performance from the Brazilian, who was sloppy in possession and unable to get to grips with the movement of Pereira in the final third. Booked for a tackle from behind on James in the second half.

MF: Jordan Henderson, 5 — A change in shape in the second half saw Henderson playing in a peculiar right-wing position, and it was a tough day in the office for the Reds skipper, who was replaced by Lallana for the final 20 minutes.

MF: Georginio Wijnaldum, 6 — The 28-year-old was Liverpool’s best player in a first half that his side were poor in, but was unable to have any influence at all in a disappointing second half. Replaced by Naby Keita after 81 minutes.

FW: Divock Origi, 6 — Appeared to have been fouled in the build-up to the United opener when he was clipped by Victor Lindelof, but the Belgian did himself no favours with his theatrical fall under minimal contact. Brought off for Alex Oxlade-Chamberlain on the hour.

FW: Sadio Mane, 6 — A frustrating afternoon for the Senegal international, who was starved of the ball for large parts of the game, and was denied a goal by VAR when the ball brushed his hand in the United penalty area as he tussled with Lindelof. .

FW: Roberto Firmino, 6 –– Had a couple of promising openings in the first half but failed to make telling connections with the ball when it mattered. Dropped into a slightly deeper attacking role in the second half, but was unable to get on the ball enough to make things happen.

Alex Oxlade-Chamberlain, 6 — Shot wide from the edge of the box shortly after his introduction, and nearly won it at the death when he fired just past the post from distance.

Adam Lallana, 7 — Completely unmarked at the back post to slot home a crucial equaliser.

Naby Keita, N/A — Laid the ball on a plate for Robertson to cross for Lallana’s tap in.