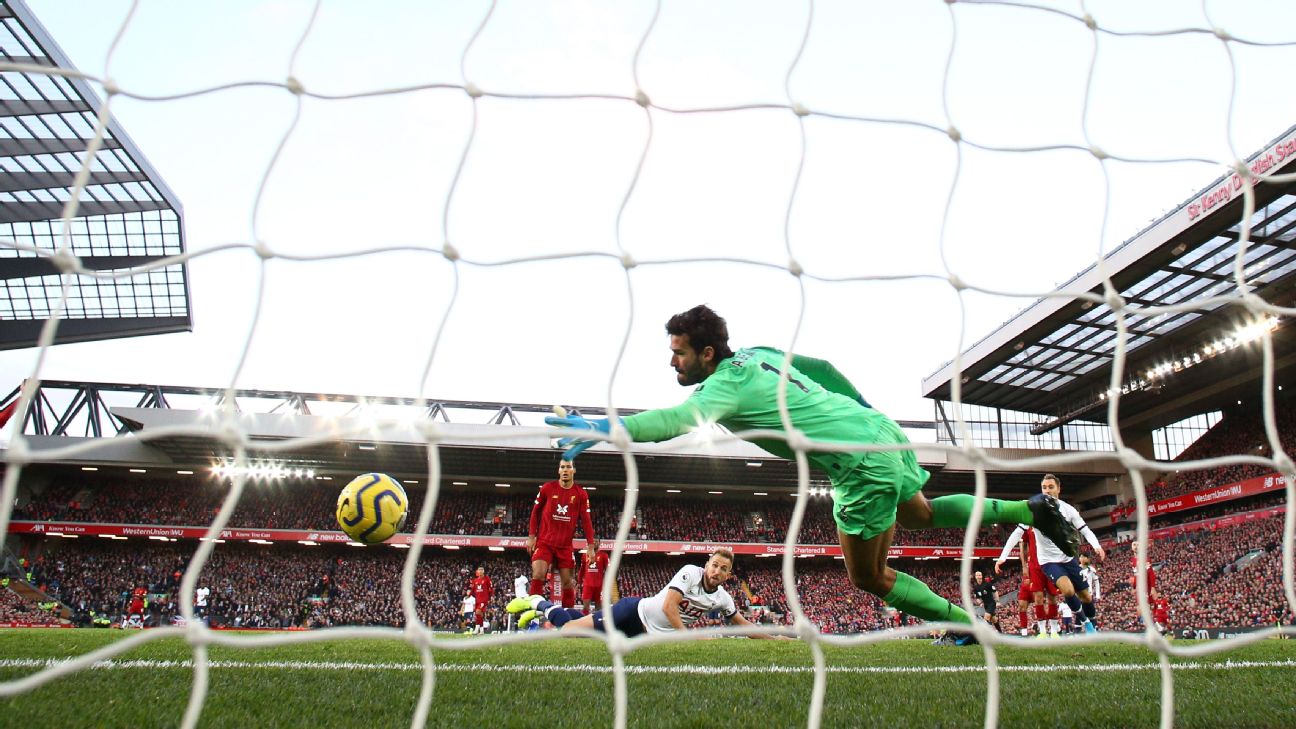 LIVERPOOL — Alisson Becker apologised for his language when dissecting Liverpool’s defensive record this season but his facial expression suggested that the words he chose weren’t strong enough.

“It always annoys me when we concede stupid goals,” the goalkeeper said when asked about the club’s lack of clean sheets ahead of Tuesday’s Champions League encounter against Genk at Anfield. “Sorry about the word, but when we concede in a stupid way, this annoys me and annoys my teammates also.”

The European champions have not yet secured a shutout in the competition in 2019-20, conceding six goals in their three group games so far. And while that is just one more than they let in at the same stage of last year’s triumphant Champions League campaign, a wider look across all competitions doesn’t reveal more positive findings.

Liverpool’s defence has been breached 20 times in 16 games this season, across all competitions, with only three clean sheets. By contrast, the Merseysiders had only conceded eight times over the same period in 2018-19. It would be easy for Liverpool to shrug off the numbers and point to the fact that they’re odds-on favourites to qualify from their continental group, before then highlighting their status as Premier League leaders. But as a team that demands the highest standards, the increase of goals against them has been visibly frustrating.

“When we enter the pitch we always have a common goal: that is win the game and keep a clean sheet,” Alisson, who helped Liverpool record 34 shutouts in 51 games last season, admitted. “When you keep a clean sheet you are closer to the victory, at least you have a draw. We can work better on that aspect.

“When you concede a goal in a difficult moment, in a moment that the team needs you to keep a clean sheet, the games become more difficult. So we need to work better on that if we want to do great things this season.”

Alisson’s calf injury, picked up 40 minutes into the season during the 4-1 win over Norwich City in the Premier League opener, is one of the explanations behind Liverpool’s bloated goals against column. Adrian, who had only joined Liverpool as the Brazil international’s deputy, was forced into action after minimal training sessions and without having a preseason or the chance to build chemistry with the team. While he performed excellently — earning hero status during the UEFA Super Cup final victory — and being near faultless following the September international break after extended time on the Melwood pitches, there were understandably initial hiccups.

At centre-back, meanwhile, Joe Gomez has not yet recaptured the form that saw him nail down the spot next to Virgil van Dijk following a lengthy ankle setback. Joel Matip, who has stepped up to partner the Ballon d’Or frontrunner, is now nursing a knee injury, elevating fourth-choice Dejan Lovren back into the starting XI. These unforeseen changes in personnel doesn’t aid consistency and opponents have picked up on it, unsettling Liverpool by restricting the influence of their full-backs, most notably Manchester United in the 1-1 draw at Old Trafford and in the narrow win at Sheffield United.

Alisson has pinpointed another issue: keeping their focus. He referenced the 4-1 victory at Genk at the Luminus Arena last month, where Liverpool switched off and let the hosts in late on for a consolation goal.

“Sometimes you have a quality opponent and when they score using [their skill] and you can’t do anything different, it’s OK. You need to accept that it’s part of the game. But I think we can do better in the concentration aspect,” the 27-year-old explained. “For example, against Genk we conceded a goal in the 85th minute so that annoyed me, it annoyed everyone on the team because we need to keep focus and keep your goals advantage.

“If you’re winning by one goal and you concede in that moment, the game is pretty much finished: you cannot do something different. Sometimes you have no time. We need to learn from these moments to make sure it will not happen again.”

Jurgen Klopp agreed with his goalkeeper’s sentiments on Monday but given that his Liverpool side has only suffered one loss this season, away to Napoli, he was quick to note “it’s only 11 matches. Yes, it feels much longer, but it is only 11 games. We always try to improve, but our main target cannot be now clean sheets.”

Liverpool still have the second-best defensive record in England’s top-flight, bettered by Leicester City and Sheffield United, who have conceded a goal less. They remain one of the best teams around when it comes to denying their opponents clear scoring opportunities, with Klopp highlighting after Saturday’s 2-1 win at Aston Villa that “for little mistakes, we’ve got really big knocks.”

There has been no noticeable trend in how Liverpool have been breached, either.

“The goals we conceded were all different,” the Reds boss said. “Against Tottenham, it was their first attack, deflected ball, crossbar… For me, it is more important opponents don’t create against us a lot. If they score with the one chance they have, it is not nice but it is nothing you can really work on.

“Of course, we don’t want to concede goals — it’s as easy as that — and as a goalkeeper, I can imagine it annoys ‘Ali.’ In the end, he is as happy as all the others when we win the games and is not too bothered too much about the clean sheet or whatever. We will have clean sheets during the season, I am 100% sure, and there will be a moment when we defend all the situations better again.”

Alisson will expect the “stupid goals” to cease being a problem starting against Genk on Tuesday before the top-of-the-table showdown with Manchester City on the weekend.