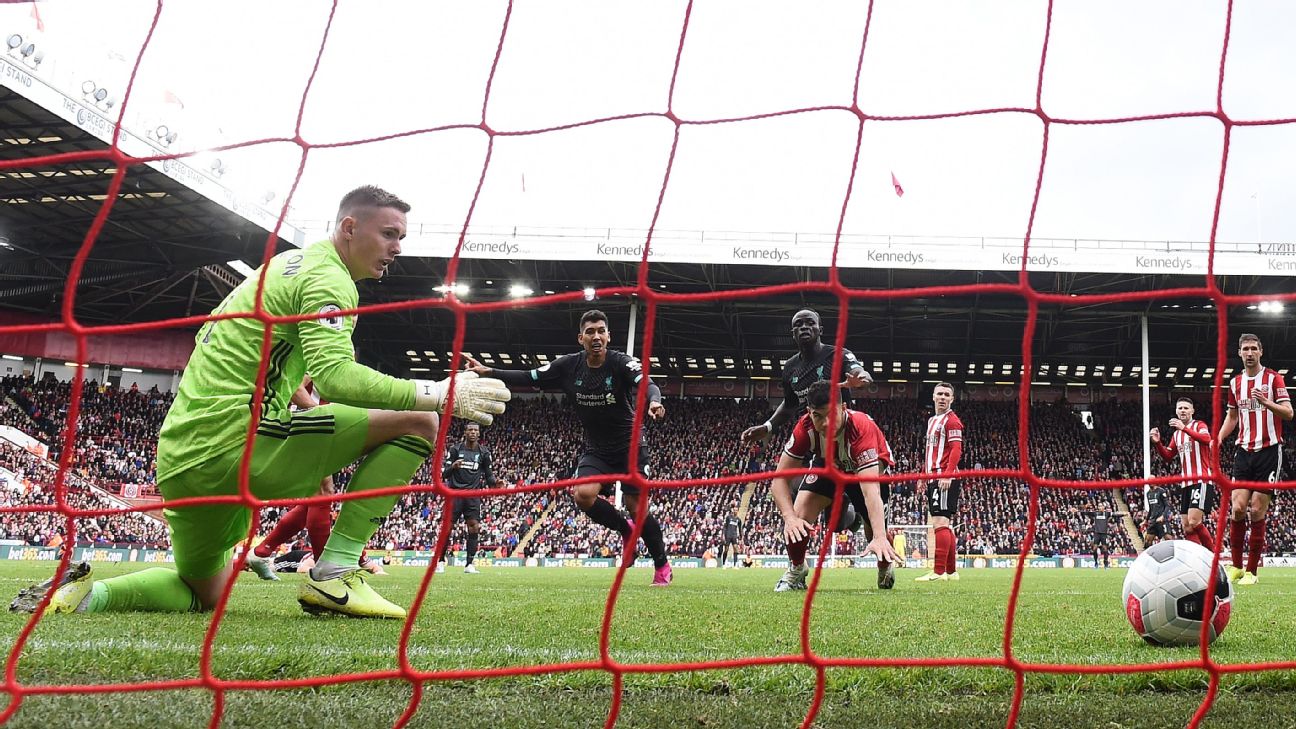 SHEFFIELD, England — In the encyclopaedia of sporting truisms, the section about luck will be bigger than most. Fortune will be explained away with sayings like “you make your own luck” or “the more I practice, the luckier I get” etc, and so on, and so forth.

ESPN’s Luck Index was set up to make the most detailed and accurate definition of luck and quantify it in the Premier League. But, however you characterise it, Liverpool were lucky to maintain their perfect start to the season in their 1-0 win over Sheffield United. This was probably their worst performance of the season, partly of their own making and partly thanks to United doing what they have done for the last few years under Chris Wilder.

Liverpool had been lucky long before Dean Henderson let Georginio Wijnaldum‘s moderate volley squirt through his grasp with 20 minutes remaining. Lucky that various basic mistakes hadn’t been punished. Lucky that groggy performances all over the pitch ultimately didn’t matter. Lucky that the Blades missed a selection of glaring chances, most notably by substitute Leon Clarke in the closing stages, hoofing the ball over the bar after a fabulous low cross by John Fleck.

“Winning on the cloudy days is important,” Jurgen Klopp said afterwards, reluctant to say that his side were poor but at the same time admitting that Sheffield United would have deserved a draw. But really he carried the look of a man who won’t be lingering over this performance for very long.

This was a classic lunchtime kick-off, players on both teams making errors you’d expect to see in a Sunday afternoon park game, the circadian rhythms of the teams perhaps thrown by having to play when they can still taste the toothpaste.

The wind swirled into the Kop in the way it often does at Bramall Lane, in a way that if this was a nondescript game in League One a couple of years ago it would make things all the more grim. But as this kicked off a Premier League weekend against the European champions, it only added to the atmosphere.

There’s something about Bramall Lane when it’s full that very much gives the feel of a big game, but resolutely not ‘Premier League’: it’s old-fashioned, rough around the edges, a bit cramped and probably not fit for purpose in some respects, but it’s great to have it back in the top flight.

Maybe all of that combined to throw Liverpool off a little. The Premier League leaders played a little like their alarms hadn’t gone off and someone had burst into their hotel at 11:30 and said “Lads! The game starts in an hour!” before leading to the whole squad tumbling onto the bus, discombobulated, hopping as they pulled their socks on.

“We started well then lost the rhythm a little bit,” Klopp added. “We didn’t accelerate in the right moments, our angles were not right. Half spaces were open pretty often, and we had moments — but not often enough.”

The first half was slightly curious, in that it was an absorbing watch but not a huge amount actually happened. Moves started but didn’t really create proper chances, until a long Virgil van Dijk pass over the top set Sadio Mane clear on goal: he encapsulated Liverpool’s performance by dithering and slicing an effort that, with a clearer mind, he might have taken with more poise. Mane also hit the post and from the rebound, Roberto Firmino hesitated and allowed his effort to be blocked.

After the break Liverpool improved slightly, but not by much. They attacked but without much penetration, and in response Klopp brought on Divock Origi for Jordan Henderson meaning they were essentially playing with four forwards, but it wasn’t any sort of tactical switch that led to the goal.

Of course it adds a pinch of spice to the whole thing that Henderson is a Manchester United player, on loan in Sheffield for a second season. Wijnaldum’s effort was straight at him and all looked safe, before the ball rattled between his arms and dribbled between his legs and over the line. He made a similar mistake for England at the Under-21 European Championship in the summer, but it’s an indication that those two mistakes aren’t representative of his overall play that the home fans gave him a standing ovation as he walked off at the end.

From that point, Liverpool seemed to acknowledge their luck, happy hang onto the 1-0 win, stuff three points into their bag and get out of town quickly. Adrian was booked for some pretty flamboyant time-wasting with about ten minutes remaining. Firmino tried the old trick of wandering towards the far touchline when he knew he was about to be substituted, only to belatedly be reminded that subs can now simply depart the pitch at the nearest point.

Afterwards Wijnaldum said Liverpool would have lost a game like that a couple of years ago, which all fits in with the idea of them being Klopp’s “mentality monsters,” a team that win games through force of will as much as their own skill. Of course they’re bound to say that, but deep down they will probably recognise this win was more down to fortune than fortitude.

This was a game to breathe in and forget, a slack performance they were lucky to get away with, but ultimately nobody at Liverpool will care. It was their 16th win in a row, only the second time in their history that they have won their first seven games of the season and a victory that put them eight points clear at the top of the table.

Lucky or not, they’ll happily take that.

Trying to make sense of Chelsea’s transfer spree: big gambles, but big rewards too?
Liga MX, FMF plan big changes before ’26 WC
Amid chaos and uncertainty, U.S. takes the long view
The European teams that have defied the odds since World Cup break
Police chiefs sorry for Hillsborough after 34 years