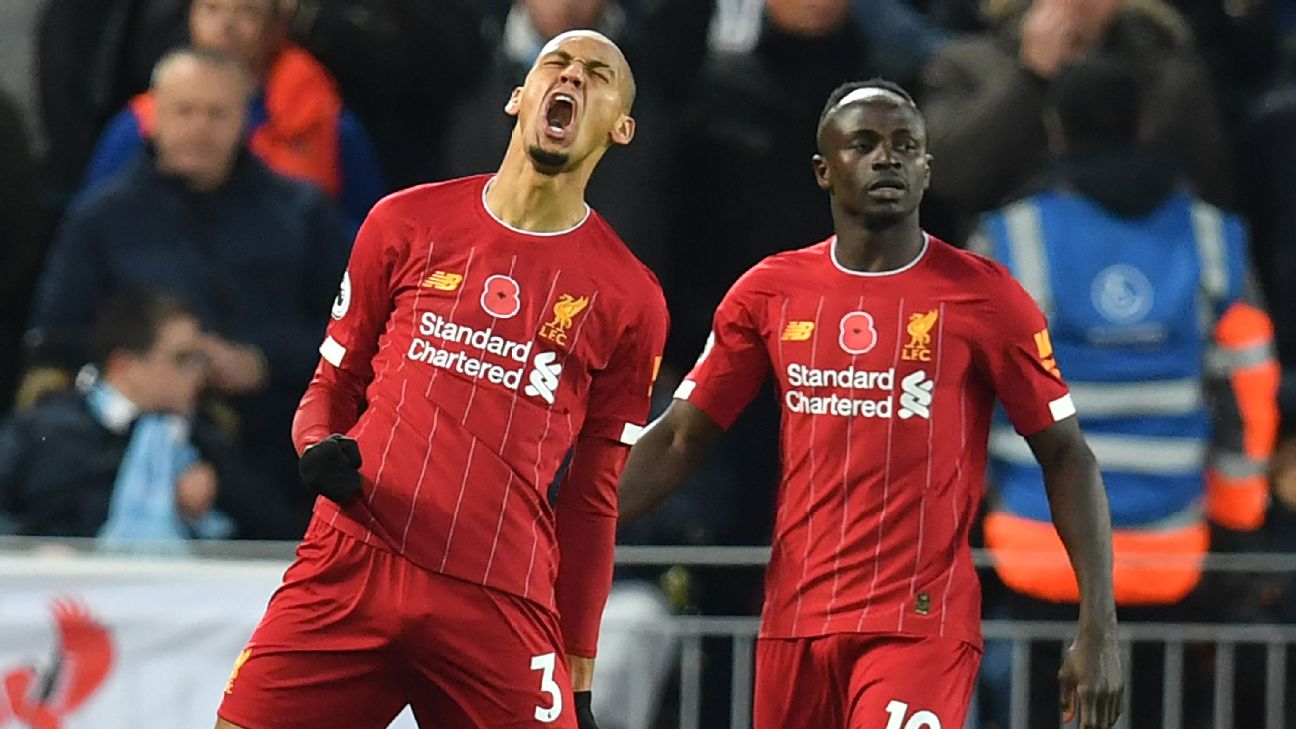 Jurgen Klopp cooled the hype over Liverpool’s nine-point gap on Manchester City following a 3-1 win at Anfield saying “we want to be first in May and not only in November,” while adding the gap seemed “crazy” to him.

The league leaders were ruthless against Pep Guardiola’s side at Anfield, with goals from Fabinho, Mohamed Salah and Sadio Mane rendering Bernardo Silva‘s late effort a mere consolation for the visitors.

Klopp insisted that his “mentality monsters” are not feeling the strain of expectation at the top of the Premier League summit, nor are they reading too much into their comfortable cushion over City.

“We don’t feel the pressure, to be 100 percent honest,” Klopp said. “Where is the pressure? Look, the things will come up now, we know that, and if you are with us you say, ‘Wow, nine points.’ There is a long way to go and lose here a point, lose there a point and stuff like this, what will probably happen. Other people 100 percent said already from now on Liverpool can only lose it, but that’s a very negative approach.

“You can see it like this, but we don’t care. I promise you we don’t care. We were today completely focused on this game and not the situation in the table or whatever, how many points we are ahead of City. That’s crazy. Nine points, you cannot imagine that something like this happens, but it is not important because who wants to be first in early November?

“We want to be first in May and not only in November. We all know that, but we don’t have to say that because it is clear. We just try what we can and in the end we will see what happens. The pressure or whatever is not there yet. Maybe it will come or whatever, but in the moment it is just opportunity and go for it, do the work, throw all in what you have and then let’s see what happens.”

Klopp marvelled at the goals his side scored, particularly Salah’s second which was created by world-class deliveries from Trent Alexander-Arnold and Andy Robertson.

“The second goal we scored, I don’t think I ever saw a goal like this,” the Reds boss said. “Probably not. A right full-back with a 60-yard pass to the left full-back; two more touches and a cross over 40 yards, 50, and a header. That’s pretty special.

“It was a good moment to score a goal like this. And the third goal very, very good as well, a sensational cross and Sadio in the right position. That was all good, and all around these three goals it was hardest work, and so the boys deserved these three points. Great.”

Klopp spent some time after the game with Sean Cox, who returned to Anfield for the first time since sustaining serious brain injuries in an attack by Roma supporters outside the ground in April 2018.

“I saw him now before the interviews. It was great, it was nice — very, very nice,” he said. “He was very happy to see me, but I thought I was much more happy to see him, so I think we had a draw!

“His wife and son were there as well, so it was a wonderful day for them, that’s exactly what we wanted. I can say already, whenever he wants to come – he can move to Liverpool and then he gets a season ticket, 100 percent.

“For all of the boys, it was really important news when we heard he was able to go to the stadium and watch a football game. I saw him today and, yes, he could enjoy the game. So, all good.”