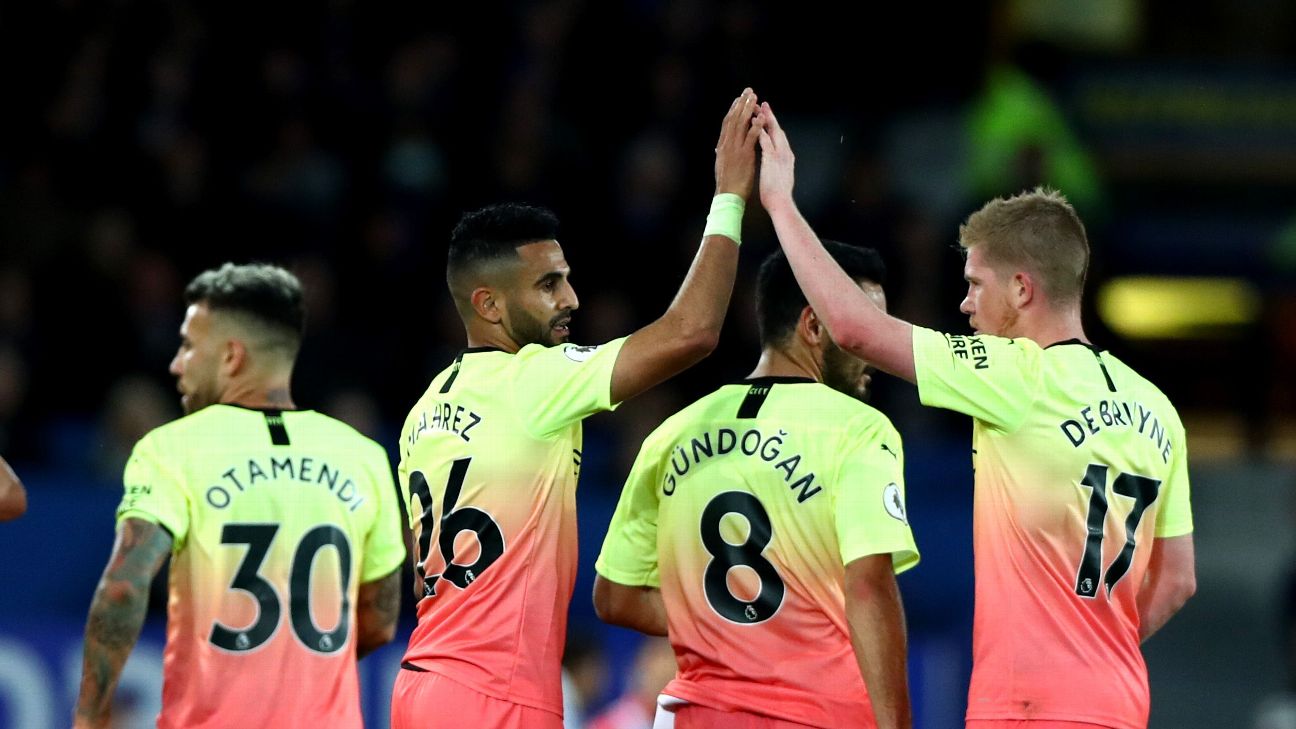 LIVERPOOL, England — When Riyad Mahrez struck a precise free kick into the bottom corner of the Everton goal after 71 minutes, there were few inside Goodison Park who were surprised.

It wasn’t that Manchester City were playing well — they weren’t — but this is a side who have now won 53 of their past 62 games against teams outside the traditional top six.

After an hour and with the score at 1-1, Raheem Sterling missed a golden chance, passing the ball wide of Jordan Pickford‘s post from 10 yards without a blue shirt in sight. It should have been one of those “maybe it’s not their day” moments. Except for the past two-plus years, it has almost always been their day. It was again here and a tricky away game for any title challenger has been safely negotiated. The gap between City and Liverpool remains at five points.

“We knew Liverpool won again, and the gap was eight points, so big,” Pep Guardiola said afterward. “We won three points, and it’s five in September, with a lot of points to play for.”

The Liverpool fans travelling back after their narrow 1-0 win over Sheffield United at Bramall Lane would have been entitled to think there was a chance of a slip-up. Their confidence would have grown a little more at half-time when news came through that Dominic Calvert-Lewin had cancelled out Gabriel Jesus‘ early opener but with this City team, you can never get too excited. After racking up 198 points over the past two seasons, they just know how to win.

They will play better than this, and the way Pep Guardiola reacted to Sterling making it 3-1 on 85 minutes — clenching both fists and contorting towards the floor — was evidence that it was a difficult afternoon. The result, though, was what most supporters had expected before kick-off; another City win.

There was a time when City struggled against Everton. Guardiola needed four attempts before recording his first win — a run of games that included a 4-0 defeat at Goodison Park in January 2017. It was a result that prompted a questioning of his methods and an examination of whether or not he could be successful in England. All those questions have been answered and then some. The only one remaining seems to be: How good can they get?

Guardiola has, of course, had plenty of backing from his board, and against Everton he was able to leave Sergio Aguero, David Silva and Bernardo Silva on the bench while still fielding a front four of Sterling, Mahrez, Jesus and Kevin De Bruyne.

Aguero had scored in each of his first six league appearances of the season, but it didn’t matter that he wasn’t in the team. His understudy, Jesus — Brazil’s first-choice centre-forward — did a fine job of filling in, heading City in front after 24 minutes. It was laid on a plate for the 22-year-old by De Bruyne, whose delicious flick of a cross with his right foot was his eighth assist of the season. No one else has more than four.

De Bruyne was at the heart of City’s crucial second, too, drawing a foul from Yerry Mina on the edge of the penalty area. Mahrez capped a fine individual performance by fizzing the free kick past Pickford. Even on a day when they didn’t play particularly well and with key players either on the bench or slightly below their best, Guardiola found others ready to provide that extra edge.

Here it was Jesus, Mahrez and Ederson, after the Brazilian goalkeeper made two vital second-half saves. On Tuesday, when Dinamo Zagreb visit the Etihad Stadium in the Champions League, it may well be three different names, as Man City have a squad built to compete for everything.

It is only September, but it is already a two-horse race for the title. Liverpool edged a nervy game at Sheffield United earlier in the day, but City were able to respond a couple of hours later. It is the type of battle that used to be enjoyed by Manchester United and Arsenal, who meet at Old Trafford on Monday night.

It is a rivalry that inspired books and television programmes, but it is one consigned to the past. The Premier League’s big two are now City and Liverpool, and they proved that again on a wet, windy afternoon when excuses would have been easy to find.

“We know which team we’re playing [in the title race] right now,” said Guardiola. “They are seven victories in a row, champions of Europe and playing good football, this is our rival and we know we can’t drop too many points because last season they lost just one game.”

After last season’s titanic battle, the relentlessness of this race — even this early — should not be a surprise.