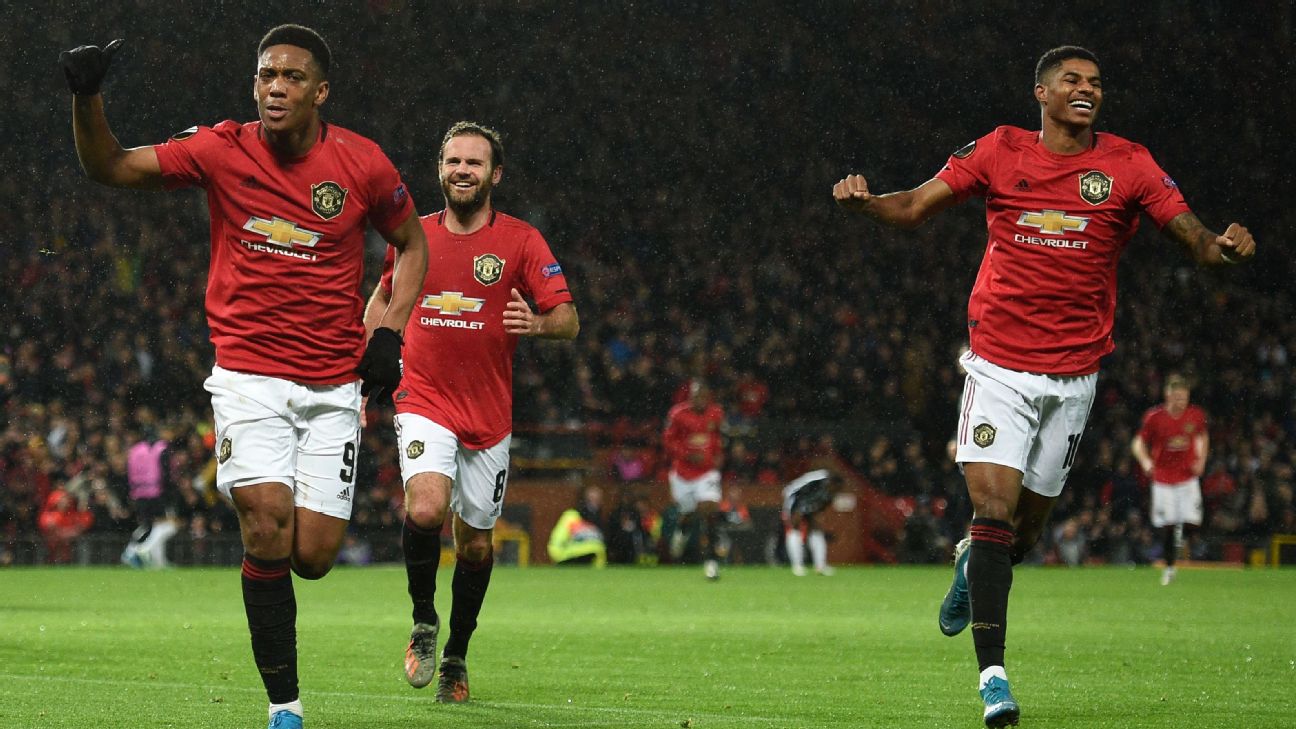 MANCHESTER, England — Ole Gunnar Solskjaer has been asking his Manchester United team to get more “second goals”, and when it came against Partizan Belgrade on the way to a 3-0 victory, it was almost — almost — worth the wait.

Teenager Mason Greenwood had already opened the scoring when Anthony Martial took four exquisite touches to travel five yards into the penalty area and poke his finish just inside the far post. In his wake lay three Partizan defenders — Bojan Ostojic, Slobodan Urosevic and Strahinja Pavlovic — all with varying degrees of distress on their faces. It drew a smile and a clap from Solskjaer on the bench, but not much more. More than anything, he looked relieved to see his team with a two-goal advantage.

Before Partizan’s visit to Old Trafford on Thursday night, United had gone 1-0 up on 11 occasions this season. Just six times they had gone on to win and only three times had they gone on to score a second goal. Martial’s goal marked the first time since January that United scored twice in the first half of a home game. Goals, particularly that crucial second, have been hard to come by but Solskjaer has been keen to insist there are signs of progress despite a miserable start to his first full season in charge.

“There have been real signs of encouragement since we last played at Old Trafford,” the United boss wrote in his pre-match programme notes. “We were on the front foot against Liverpool and we really should have won the game. At Norwich, we were a joy to watch going forward. Then we came through a tough Carabao Cup tie at Chelsea thanks to a bit of magic from Marcus Rashford.”

Solskjaer’s endless positivity has started to wear thin with some fans, but against Partizan there was tangible evidence to back it up. By the time Greenwood coolly stepped beyond Urosevic to put United ahead in the 21st minute, it should already have been 2-0. Inside the first 10 minutes alone, Rashford slashed a shot wide of the post from Aaron Wan-Bissaka‘s cross from the right and saw a point-blank effort saved by Partizan goalkeeper Vladimir Stojkovic. Martial, meanwhile, could have had a first half hat-trick had he not skied two good chances either side of his bit of solo magic.

Rashford, at the centre of most of the good things United did, got the goal he deserved shortly after half-time to make it 3-0. It marked just the third time all season that United had scored three times in a single game, but beyond the stats it was a performance (particularly in the first half) that seemed a world away from their stale display in Serbia two weeks ago, during which United had one shot on target and needed a Martial penalty to scrape a narrow 1-0 win. With 20 minutes still to play at Old Trafford, they had managed 14 shots and seven on target.

“We couldn’t live with their tempo,” Partizan manager Savo Milosevic said after the match.

United fans will know by now not to get carried away. After all, their last home win in the Europa League was followed up with a dire defeat at West Ham. Three days after an impressive win at Chelsea, they were beaten 1-0 at Bournemouth.

It was an unqualified success to secure their place in the Europa League knockout rounds with two games remaining but a better test of where they stand will come against Brighton on Sunday. It says everything about their form this season that victory over Graham Potter’s side would be their first at home in the Premier League since mid-September. Rashford said earlier this week that hopes of a top-four finish are far from over but if they to pull it off, they will have to beat teams like Brighton at home. It is certainly not guaranteed; Brighton actually head into the fixture two points and two places above their hosts in the table.

Despite that demoralising defeat at Bournemouth last weekend, there is a different feel around Old Trafford than there was a month ago. Since Martial returned to the squad following a eight-week lay-off because of a thigh injury, United have won four and drawn one of their six games, scoring 10 goals. The Frenchman has scored three goals in his last four games, Rashford five in his last six. There are, at least, signs of life.

United supporters have heard too often about watershed moments and turning points to start debating whether this was one or not. The truth is it’s far too early to say, but it was a night when they were treated to goals, entertainment and a win, all of which have been in short supply for far too long. Yes, it was the Europa League and yes, it was Partizan Belgrade, the fourth-best team in the Serbian SuperLiga this season, but every good run has to start somewhere. Solskjaer will hope he still has a reason to smile on Sunday afternoon.