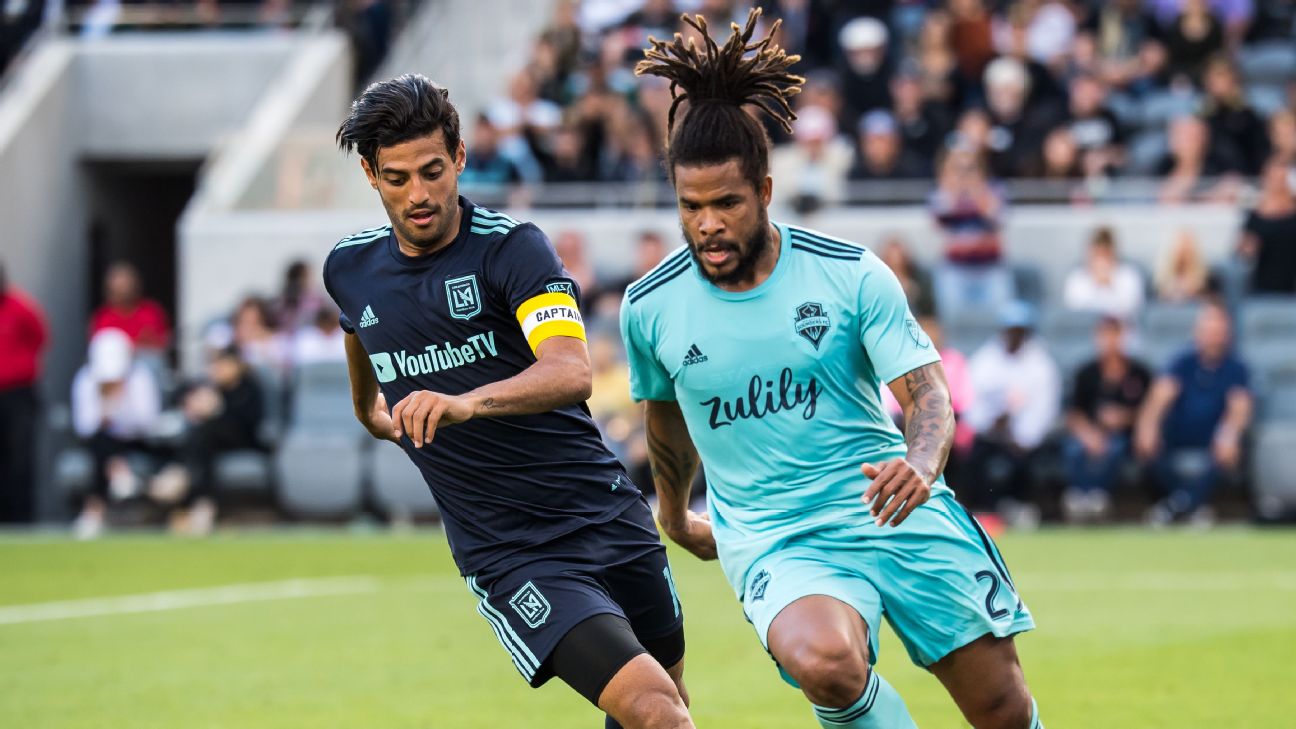 Is this the greatest final four in MLS playoff history? The conference finals feature the best team in the 2019 regular season, as well as the last three MLS Cup winners.

So who is set to reach this year’s final on Nov. 10 (3 p.m. ET, ABC)? As LAFC prepares to host Seattle Sounders and Toronto FC travels to take on defending champion Atlanta United, we break down the matchups.

Jump to: LAFC vs. Seattle | Atlanta vs. Toronto

Backstory: LAFC is looking to emulate Atlanta a year ago by claiming the league’s top prize in just its second season and could also lay claim to being ranked among MLS’s best-ever teams, considering its record 72-point haul during the regular season.

For the third time in four years, meanwhile, the Sounders are in the conference finals. Players and tactics have changed, but the results continue to rack up under the steady hand of coach Brian Schmetzer.

Playoff path: For the first time in six games, LAFC got one over on cross-city rivals LA Galaxy by winning 5-3 encounter in a conference semifinal classic. Thanks in large part to two goals from Carlos Vela, it was the first playoff win in franchise history for LAFC.

After surviving a wild 4-3 extra-time win over FC Dallas in the first round, Seattle had a more straightforward outing in the semis, downing Real Salt Lake 2-0 behind second-half goals from Gustav Svensson and Nicolas Lodeiro.

Connecting thread: This is the first playoff meeting between the teams, but there is some interesting history. In March 2018, LAFC won 1-0 at the Sounders in its first-ever MLS game. Later that season, the same result marked the opening game at Banc of California Stadium. In four matches between the two teams, Seattle has yet to win, with three defeats and one draw.

Tactical contrast: Taking into account the previous two meetings this season, in which LAFC dominated possession, the odds are that Bob Bradley’s men will dictate the tempo. The Sounders were able to absorb RSL’s attack in the previous round, but will not have such a luxury against a more dangerous Black and Gold attack.

Headaches: Adama Diomande‘s two-goal performance off the bench against the Galaxy might be enough to earn him a start over Brian Rodriguez, who played well himself on derby day and set the table for Vela’s second goal.

On the flip side, Roman Torres’ injury creates a quandary for Schmetzer. If the defender is anything shy of 100 percent, then Xavier Arreaga would be the logical call as he was against Salt Lake. Elsewhere, Victor Rodriguez also impressed off the bench, but Joevin Jones is likely to keep his spot.

Star men: Vela continues to amaze. Not only did he tack on another two goals against the Galaxy, but he also delivered a superb assist on Diego Rossi‘s crucial tiebreaker that gave LAFC a 3-2 lead.

For Seattle, Jordan Morris was the hero against FC Dallas, but Lodeiro took control against Salt Lake and he must make his presence felt again, this time against a superior opponent. Lodeiro is his club’s most creative player and can put the top seed to the sword.

Where the game will be won or lost: It will be down to LAFC’s efficiency in Seattle’s defensive half and which Sounders defense shows up. Will it be the one that leaked goals and looked shaky on set pieces against Dallas, or the wall that shut out RSL?

X factor: Any time things get wobbly for LAFC, Eduard Atuesta just knows to get on on the ball and restore order. If he has time and space, it makes his team almost impossible to stop.

For Seattle, Cristian Roldan could rise up and make a difference. Relatively quiet against Salt Lake, a clash with the league’s top team could provide a spark for the U.S. international midfielder.

LAFC will win because: Even if Vela has an off day, which is unlikely, it has too many other weapons for Seattle to survive.

Seattle will win because: Schmetzer doubles down on defense and gets enough out of the transition game to pull off a shock upset.

Backstory: For all the hemming and hawing about Atlanta’s season, the team ended up where it expected to be: Playing at home with a chance to reach back-to-back MLS Cup finals. Frank de Boer’s perceived struggle to adapt to life in the league is little more than a memory.

As for Toronto, the Reds were never going to be satisfied with a half-step back from the league’s elite following a disappointing 2018. Two playoff victories and a conference final berth represent a return to relevancy.

Playoff path: There has been nothing irresistible about Atlanta’s run, but that should not take away from the achievement. Down two defenders, United managed to navigate potentially tricky matches against two clubs that had nothing to lose, New England and Philadelphia. Talent is Atlanta’s advantage and it uses it well.

The losses of injured pair Jozy Altidore and Omar Gonzalez should have been debilitating for Toronto, but Greg Vanney and Co. have made sure absent players would be no excuse. It took more than 90 minutes to take care of D.C. United, but Toronto was ruthless at NYCFC.

Connecting thread: Nothing connects these teams more than ambition. Two of the highest-spending clubs in MLS face off in a clash that feels like a battle of league giants. Toronto’s rise to prominence set a bar that Atlanta aimed to meet immediately upon entering the league.

Tactical contrast: De Boer’s focus on possession for the purpose of preventing the opponent creating chances will be tested. Atlanta’s aim remains to get Ezequiel Barco and Pity Martinez (should he start) on the ball in space. Josef Martinez provides the release valve.

Toronto deployed a pressing approach that slowed down NYCFC in the midfield and a similar setup might be on tap, although Darlington Nagbe‘s ability to dribble out of pressure could be pose danger if the press is ineffective.

Headaches: So far in the playoffs, Atlanta’s lesser athleticism at the back has not been punished, but that could change if Toronto gets Altidore back to play some part in proceedings.

If the U.S. striker cannot go from the off, Vanney faces a conundrum: Start Alejandro Pozuelo as a false nine with the thought of bringing Altidore on later, or use Patrick Mullins and go direct. Gonzalez, at least, is likely to be available.

Star men: Josef Martinez is Atlanta’s best player and ace in the hole. If and when United is bogged down in attack, it can often look to him for a game-changing moment from almost nothing.

With two goals, Pozuelo showed his worth against NYCFC. He will be in the spotlight again and must be at his best if Toronto is going to shock the Mercedes-Benz Stadium crowd.

Where the game will be won or lost: With Michael Bradley at the center of the fray, Toronto’s ability to slow Atlanta’s midfield from connecting with Barco and Pity Martinez will decide the winner of a fascinating Eastern Conference final.

X factor: Pity Martinez did not start against the Revolution but was back in the Atlanta lineup against Philadelphia. In the first XI or off the bench, he figures to have a key role in the outcome.

Jonathan Osorio‘s work on both ends of the field is a major part of Toronto’s success. Moreover, the Canadian midfielder has had a habit of scoring important, dramatic goals.

Atlanta will win because: The champs have the talent advantage and a boisterous crowd behind them. De Boer can pick a team to slow Toronto and find enough goals to win.

Toronto will win because: Confidence is high, Pozuelo is in excellent form and the moment will not be too big A year away from the spotlight did not rob TFC of its championship credentials.