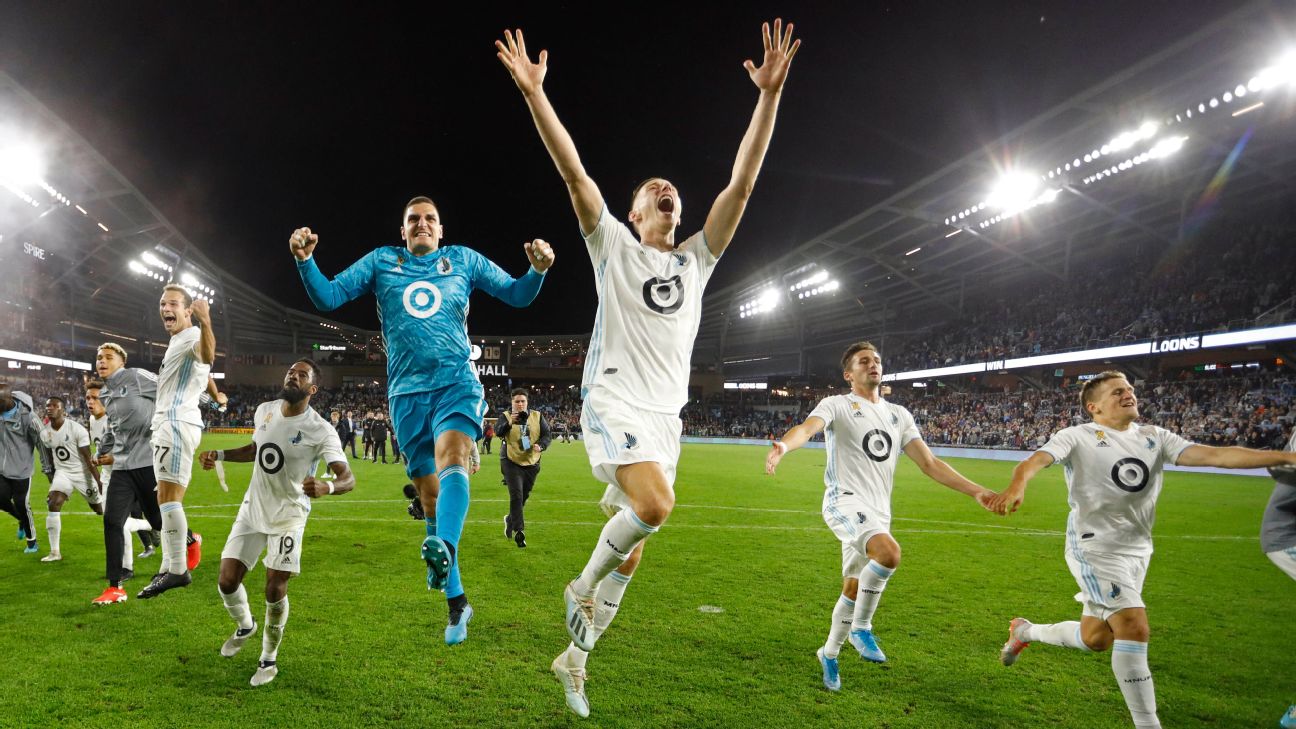 The penultimate week of the MLS season delivered plenty of the weird and wild that we’ve come to expect from a league that values parity over everything else. Even a historically great team is having a bit of trouble seeing out the regular season (though, to be fair, LAFC doesn’t have a lot left to play for.)

The upshot of the week is that we head into Decision Day with plenty of weirdness still available. Sure, all of the Eastern Conference playoff spots are spoken for, but getting a home playoff game in the new format is kind of a big deal.

Out West, the land of wide open spaces — we’re looking at you, Galaxy back line — there are still two playoff spots unclaimed and four teams still in the hunt. We’re rubbing our hands together and cackling with glee over the possibilities. The playoffs are on the line, after all. So, without further ado, for the penultimate time… RANK.

On Sunday, Carlos Vela scored goal No. 31 of the season to tie Josef Martinez’s record, but the bigger story might be LAFC’s inability to win down the stretch. Wednesday’s victory over Houston doesn’t do much to quell the chatter that Bob Bradley’s team looks nothing like the invincible side we saw for much of the season, especially after the draw with Minnesota.

The Pigeons scored a win against Atlanta but looked less good against New England on Sunday. That said, they were good enough to hold on to No. 1 spot in the East (though not in these rankings), NYCFC claimed top seed a week early thanks to Columbus’ win over Philadelphia.

After losing in New York on Wednesday, the test for the Five Stripes was to prove they could win without Josef Martinez. They didn’t do that, but they did pick up a point and pull ahead of Philly on the tiebreaker for second in the Eastern Conference. Confidence is still a question.

While Atlanta was playing to a disappointing draw with the Impact, Philly had a chance to consolidate second place in the Eastern Conference. Instead, the Union took one of those losses fans can only hope doesn’t portend a dip in form at exactly the wrong time.

The Loons closed out their home schedule with a win against Sporting KC and a strong performance against LAFC; they will now have a chance to secure the second seed in the West on the road in Seattle next week. There’s not much more you could ask for as a United fan in 2019.

The difference between a win and a draw on Sunday against the Fire for TFC was the difference between going into Decision Day holding a top four spot and fighting to climb over two teams for one on the final day. The Reds are now counting on Montreal and FC Cincinnati to play spoiler… it’s far from ideal.

A late Jordan Morris tally in San Jose sets up a massive showdown with Minnesota United on Decision Day with second place in the West on the line. Tip of our cap (it’s a bowler, FYI) to Morris, who has bounced back from missing all of 2018 with a 10-goal season.

File the performance in New Jersey under “good enough” for United, save for one fact (more on that in a second). The draw gives United the inside track for a home playoff game going into Decision Day vs. Cincinnati. The only problem? Wayne Rooney will miss the game due to suspension for picking up a yellow card.

The Revs made the playoffs. They’ll be going on the road in the first round, but the fact that they’re in at all is remarkable. We’ll leave it to noted wordsmith Bruce Arena to sum up the achievement with a quote following the win over New York: “As they say, [expletive] happens.”

The Rapids are clinging to their playoff chances by a fingernail and it’s going to be really difficult not to root for them on Decision Day. Considering the historically poor start to the season Colorado had, just being in the hunt on the last day of the regular season is a Rocky Mountain miracle.

The MLS team most likely to be the subject of a telenovela secured a playoff spot on Sunday with a win over Houston following a midweek loss to the Galaxy. Considering all the “outs” happening in Utah, for the team on the field to chalk up an “in” is something of an upset.

At RSL, Zlatan Ibrahimovic scored his 28th goal of the season to secure a playoff berth; against Vancouver on Sunday he scored his 29th, but the defence didn’t hold up its end of the bargain against the Whitecaps as a late goal in the 4-3 defeat pushed the Galaxy from third place to fourth in the West. GACK. Double gack. So much gack.

All that momentum coming in and all the Red Bulls could manage was a goalless draw with DC United. New York now needs to beat Montreal and have DC to fall to Cincinnati on Decision Day to get a home game at Red Bull Arena in the first round of the playoffs.

The Timbers are never boring, that much is certain. A wild and angry affair in Kansas City ended in a draw, which means Portland will play the Quakes on the final day of the season with their playoff lives in their hands, but without the suspended Brian Fernandez.

With no wins in four, a 3-0 hammering by Colorado made it another bad week in Texas. But they’re still in contention for a West playoff spot. Just.

It was a season of mild disappointment and brighter silver linings for the Crew. The ultra-competitive Caleb Porter is naturally disappointed in missing the playoffs but with new ownership and the excitement of a stadium under-construction, 2020 figures to be better.

The Quakes will have a chance to make the playoffs on Decision Day, but it’s hard not to think about how much grief they could have saved themselves if they had avoided the late season nosedive. Now a trip to Portland looms with everything on the line.

The feisty ‘Caps from last week stayed feisty on Sunday, pulling out a win against the Galaxy and potentially spoiling Zlatan & Co.’s chances at a home playoff game. That’s something!

The dream died for the Fire a week before the end of the regular season, but there’s plenty to look forward to in the offseason. The Fire need to start packing for the move back to Soldier Field, so they’re probably out hunting for boxes as we speak.

A late equalizer against FC Cincinnati saved the Lions from an embarrassing defeat but it couldn’t save them from being eliminated from playoff contention. Yet another season, yet another repetition of the question, “What now?”

Neither LAFC nor RSL was having any of this “Zombie Houston” business.

The performance by Sporting on Sunday was “spirited,” which is better than the alternative. Roger Espinoza set a record… for most red cards in an MLS career.

One more game to go before FCC is no longer a first-year MLS franchise struggling to figure it out. The bad news is that Cincinnati now holds the record for most goals conceded in an MLS season after letting in an equalizer to Orlando City.

We regret to inform you that the Montreal Impact season is now deceased.