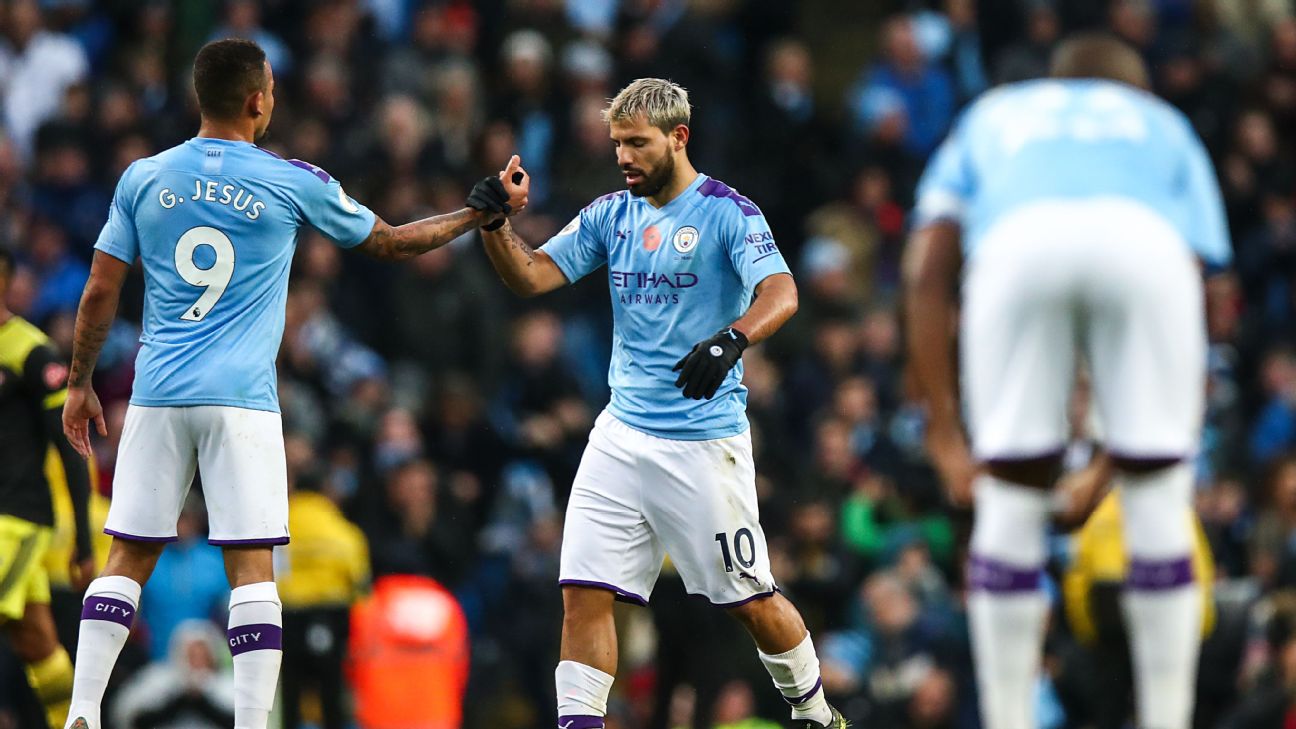 Everything you need to know about this weekend’s Premier League action, all in one place.

Jump to: Is the title race over if Man City don’t win? | Is time running out for Emery?  | False hope for Tottenham? | Fantasy tips | Stats of the weekend | Man to watch | Game you should watch | Team that needs luck | One thing that will definitely happen | Predictions

Is the title race over if Man City don’t win?

Hyperbole? Perhaps, but a Liverpool victory will mean they are nine points clear with under a third of the season gone, the sort of intimidating lead that it’s difficult to see anyone overhauling, even Pep Guardiola’s Manchester City.

So for us neutrals who want a title race with peril, closeness, uncertainty and tension, are we in the unusual position of hoping City can pull off a victory? If they do, they will be within three points of the top, and also if both Leicester and Chelsea can beat Crystal Palace and Arsenal respectively, then the top four will be separated by just five points. Now that would be spicy.

It promises to be a special game anyway, and not just because it’s the two best teams in the country facing each other. City need to win, so can’t be cautious even if they knew how to be, while Jurgen Klopp’s previous successes against Guardiola have been based on aggressive, attacking play, and you suspect he will let slip his dogs of war to attack City from the start. Cancel all your plans.

Will Unai Emery do enough to keep his job?

Most Arsenal fans have now reached the point where they can’t see the back of Unai Emery quickly enough. But the club are playing it more cautiously, reluctant to sack a manager who has actually only lost two league games this season and has his team in fifth place.

How long will that remain a viable stance, though? In each of their last four games, Arsenal have taken the lead but failed to win, just one of the ways in which they are such a dispiriting side to watch, a team that is boring but also no good in defence, who have little character, spirit or style.

If a team isn’t entertaining then they need results; to this point results have just been good enough, but that’s changing. And if they get a thrashing from Leicester this weekend, as is entirely possible, then Arsenal may be forced to act.

Will this win over Red Star be another false dawn for Tottenham?

A few weeks ago Tottenham ran in five goals against Red Star Belgrade, and while the opposition was moderate it did spark a little hope that they would take that form into the Premier League. That didn’t quite work out: they lost to and were dominated by Liverpool, before playing out truly one of the worst games of Premier League football in years, in the 1-1 draw with Everton. All the momentum that the first Red Star win promised was gone.

Now, they’ve given the same team another hiding, with more terrific individual performances and once again a hint that Mauricio Pochettino has found a system that suits his players well. So will this actually be the start of something more tangible, or another false dawn for Spurs? They face Sheffield United this weekend, and if they pass that stiff test, we might be able to believe the spark is returning to Tottenham.

Kieran Darcy has some tips for the weekend action. Read his full preview here and set your team lineup!

Abraham has nine goals, one behind league leader Jamie Vardy, but he’s also second in the league in xG (expected goals) while Vardy is only 17th.

Maddison is tied for second in shots among all midfielders, and had eight chances created against Crystal Palace last week.

Avoid at all costs: Alisson, Goalkeeper

As good as Liverpool have been this season, they haven’t kept a single clean sheet in eight home games across all competitions, and now they’re hosting Manchester City.

Stats of the weekend

— Chelsea seek their sixth consecutive Premier League win for the first time since May of their title-winning 2016-17 season, while their opponents Crystal Palace (11 road wins) trail only Liverpool and Manchester City (18 each) and Chelsea (14) for most road league wins since the start of last season.

– Tottenham enter the weekend 11th in Premier League with 13 points, their fewest points through 11 games since 2008-09. They host Sheffield United, who are winless in last 17 league matches in London (0-11-6 W-L-D) since beating Chelsea in October 1992.

Bravo … should Ederson be out for City

It’s not ideal for any team to lose their first-choice goalkeeper, but for Manchester City it’s a bigger deal than most, particularly for a game against the side six points clear of them at the top of the table. The word from City was that Ederson was substituted in their Champions League game against Atalanta as a precaution, and they’d better hope he’ll be fit for the visit to Anfield on Sunday.

City’s defensive issues this season have been extensive, but playing a midfielder or two as centre-backs wasn’t quite so much of an issue with the security of Ederson behind them.

With Claudio Bravo in goal though, that security disappears pretty quickly, firstly because he simply isn’t very good at the basics of keeping, but he’s also liable to do something entirely ludicrous, as he did to get sent off against Atalanta. Guardiola isn’t a religious man, but he might be asking a deity of some sort for a favour before Sunday.

The game you’re not watching … but should

On any other weekend this would be the most intriguing game around. In the red corner we have Southampton, buoyed a little by a pair of creditable performances against Manchester City as they try to wash away the shame of that 9-0, but who need to turn those showings into something tangible.

And in the blue corner Everton, or perhaps more specifically Everton manager Marco Silva, who absolutely positively needs at least four points from this game and the next versus Norwich, given the following five see them face Leicester, Liverpool, Chelsea, Manchester United and Arsenal. If he gets nothing, the sack could be near.

The team that needs a bit of luck

Watford in their relegation fight

A generous interpretation of the work Quique Sanchez Flores has done since returning to Watford is that performances have become more solid, the defence more secure.

But in truth they haven’t really looked much more like winning a game than they did when Javi Gracia was in charge, displays with little inspiration and only two goals scored in the last six games.

Perhaps luck isn’t what they need to actually sustain something over the coming season, but a bit of fortune might help them beat Norwich on Friday night, in what is already a colossal relegation six-pointer.

One thing that will definitely happen

Vardy will score against Arsenal

The Leicester talisman will pretty much score whoever he plays against these days, but he has a particular liking for Arsenal.

He’s got eight in his last eight against the Gunners, and if he doesn’t find the net then nobody tends to: the last time another Leicester player scored against Arsenal in a game when Vardy didn’t was in 2015.

And you can let Vardy off for that one: he didn’t play. So given that Vardy has seven in his last five, and he’ll be facing a fragile Arsenal defence … there can hardly be a surer thing in football this weekend.