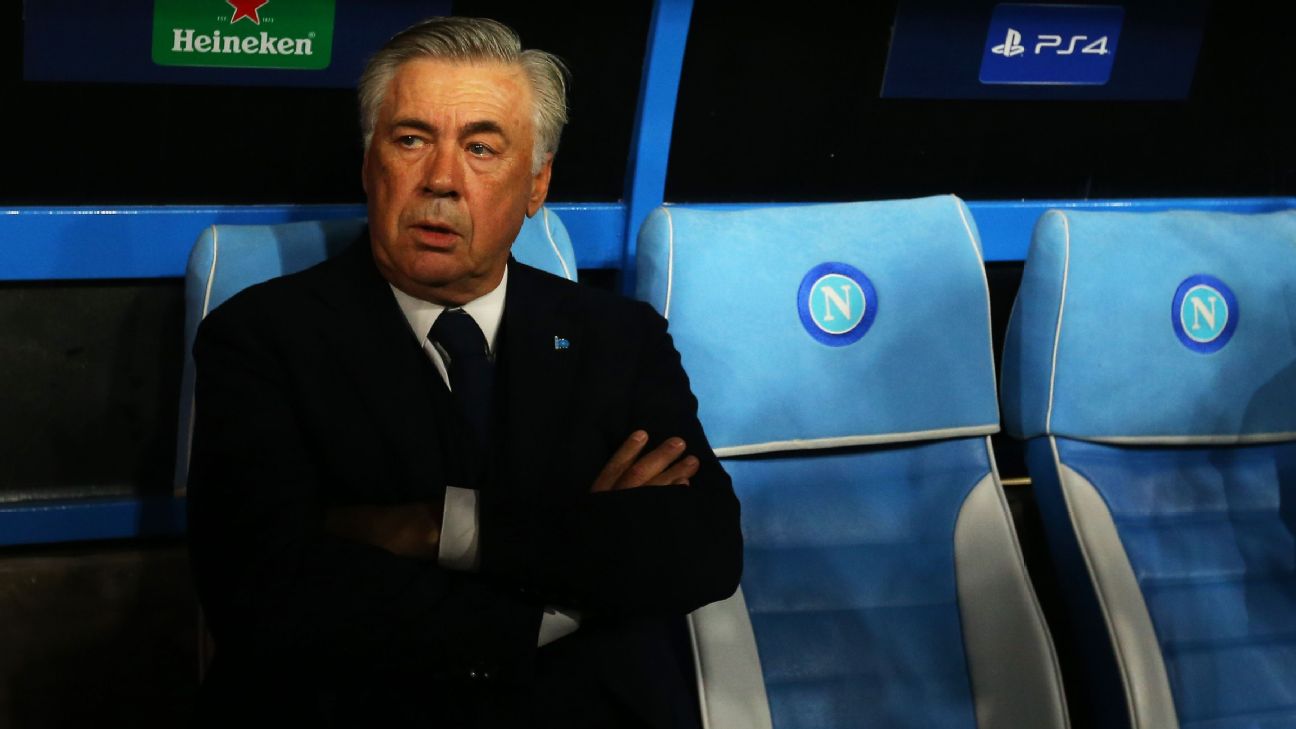 Napoli manager Carlo Ancelotti spoke to the media ahead of their Champions League clash with Liverpool despite a club-imposed media embargo.

The Serie A side have been in turmoil recently. President Aurelio De Laurentiis had ordered the first team squad to go into a week-long retreat following a string of poor results but the players refused.

Sources have told ESPN FC that the internal mutiny led to De Laurentiis issuing each player a fine of 25% of their monthly wage — which will total over €2.5 million.

He imposed a media blackout on the squad and North Macedonia midfielder Elijf Elmas was reprimanded by the club for breaking ranks and talking to local media during the international break. However, ahead of their trip to Anfield, Ancelotti played down the issues.

“I think the press silence has been a way of concentrating on the pitch, but also ended up giving airtime to many who have said all sorts of rubbish,” he said. “The atmosphere is much more relaxed than people say.

“There is no club against squad battle, no internal warfare, there is a club and everyone trying to analyse why our performances have not been what we expected. That is above all in Serie A, because in the Champions League we are essentially on track.

“President Aurelio De Laurentiis can’t come with us because he just made a long journey from Los Angeles, but he is close to the team and close to me. If anything, too close, as he calls me every day. As long as he’s paying the phone bill, that’s fine.”

“I expect Napoli to be really strong for a number of reasons,” Klopp told reporters. “They are a really good football team.

“And now that they’re not in Italy, they feel maybe relief they can play in this game. We have to be ready for that. Napoli gave us a proper fight at Anfield last season [in a 1-0 win].

“We expect them to be strong. Whatever has happened, I don’t have a real idea. But if I was a player, I’d be trying to bring the group together and fight the things from outside.

“We have to make sure from the first second this is a different place tomorrow. We want to go as far as possible in the Champions League. Napoli are experienced, tactically strong, super players.”

A win for either side will assure qualification with a game to spare, and both teams will qualify regardless of the result if winless Genk beat FC Salzburg.

“[The final group game in Salzburg is] not in our mind,” he added. “Tomorrow night, we try to win, it would be massive for us for different reasons.

“We don’t feel like we are already halfway through.”

Klopp also said forward Mohamed Salah, who missed the weekend’s Premier League win at Crystal Palace with an injury, was back in training, while adding that Joel Matip — sidelined with a knee injury since October — was still some time away from a return.

Information from Reuters was used in this report