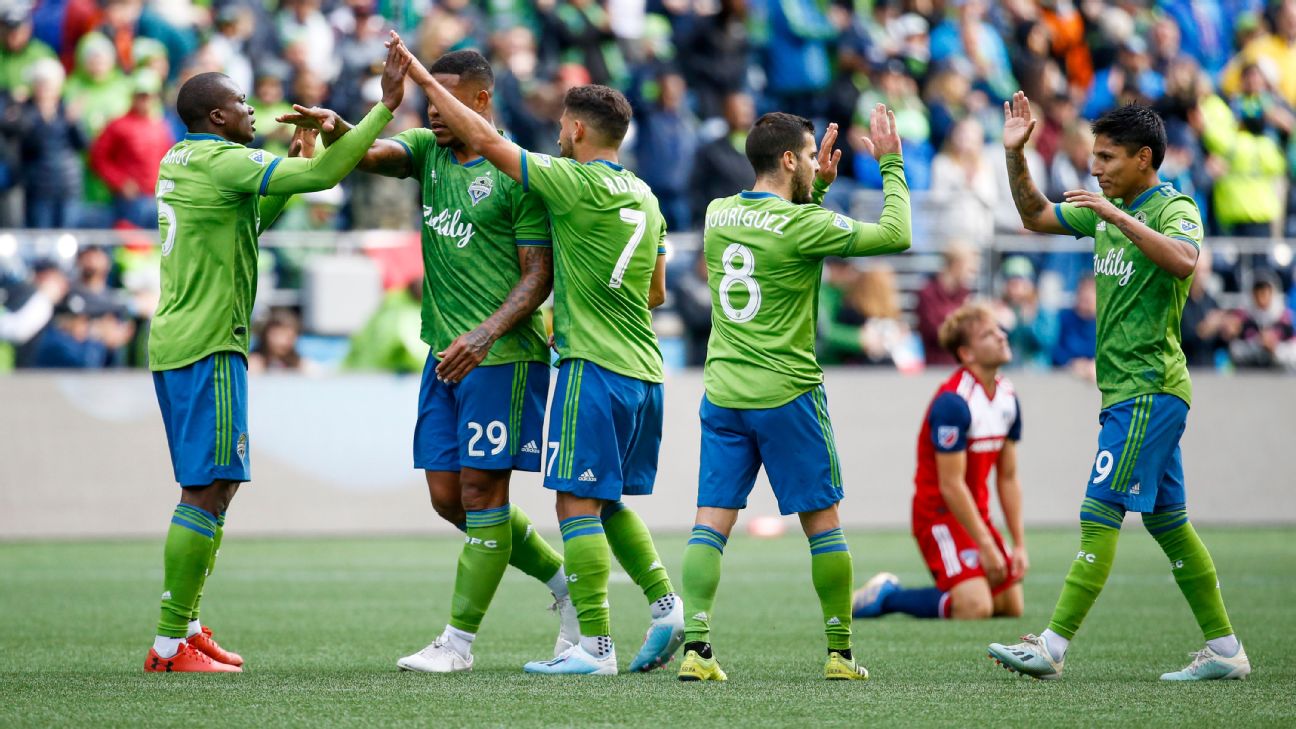 The first round of the 2019 Major League Soccer playoffs are in the books, and it wasn’t for the faint of heart. Here is a look back at round one of the postseason.

JUMP TO: Sounders-FCD a match for the ages | What to do with Pity Martinez? | Philly finally have that game | Extra fun for Toronto FC | Time for Mr. October | The best sort of traffic to be stuck with | Credit where it is due

There is always one game in the MLS playoffs that makes you feel like you are living in some sort of surreal soccer world and for the second year running, Seattle was the location.

A year after their Western Conference semifinal second leg to remember against Portland, the Seattle Sounders and FC Dallas delivered a match for the ages that ended 4-3 to Seattle in extra time and somehow with all 22 players on the field.

There’s a lot to unpack here but first, all credit to hat-trick hero Jordan Morris after a difficult Tuesday night last week with the United States national team in Toronto. Morris has always had a nose for goal — especially when things get messy or scrappy — and he came up big for the Sounders.

Kudos are also warranted for FC Dallas after coming back from 2-0 and 3-2 deficits and very nearly finding a late equalizer in stoppage time. The league’s youngest team was brave and they’ll only get better.

Overall, this was entertainment at its finest. Was some of the defending bad? Absolutely. Was some of the decision-making poor? No doubt. Did players lose their cool and deserve to get sent off? Here’s looking at you, Jesse Gonzalez But like last year’s thriller against Portland, it was a time to embrace the hilarious absurdity of it all.

Pity for your thoughts

A year after leading River Plate to an epic Copa Libertadores title and being named South American Player of the Year, Pity Martinez can’t even get off the bench in an MLS first round playoff match for Atlanta United. Yes, the reigning champions did advance with the 1-0 win over the New England Revolution but the fact that the big winter arrival didn’t even see the field for coach Frank de Boer is startling and will be the biggest question heading into round two.

– MLS Playoffs: What you need to know

There is an eerie parallel with Ezequiel Barco, who sat on the periphery of Atlanta’s title run last season after his own big offseason move from Argentina. But Barco is six years younger than Martinez and had time on his side. That’s not as much the case with Martinez and after a disappointing year one in Atlanta, one can’t help but think there are many “what ifs” going through Martinez’s mind.

Martinez could still well factor in Atlanta’s postseason journey but to see the league’s most high-profile signing in the last year not even factor in a do-or-die match is noteworthy.

In their history, the Philadelphia Union really haven’t had that signature moment or that game that fans can pull up on YouTube when they’re feeling blue. Until now. Down 3-1 early in the second half against the New York Red Bulls, the Union rallied to force extra time before winning it on Marco Fabian‘s deflected winner.

That Philly was able to make the necessary adjustments and shut down the Red Bulls attack for almost the final hour is a credit to coach Jim Curtin and the resiliency of the Union squad. So too is the fact that this comeback happened without leading scorer Kacper Przybylko is even more impressive.

Like Pity Martinez and Atlanta, Fabian not starting on Sunday has the potential to loom uncomfortably over the Union, but they look equipped to handle any adversity that comes their way. The two teams will meet Thursday night with a spot in the Eastern Conference finals up for grabs (8 p.m. ET, ESPN2).

Extra the fun in Toronto

What a week to be in Toronto. Last Tuesday, the denizens of the Canadian city were treated to a historical 2-0 whipping of their neighbors to the south in the CONCACAF Nations League and then on Saturday they were treated to a festival of goals in extra time for local side Toronto FC against DC United in a 5-1 final score. It didn’t match the five extra-time goals tallied by Italy and West Germany in the 1970 World Cup semifinals but it was stunning nonetheless to see Toronto FC score four in the added 30 minutes, with all of them coming in the first period of extra time.

Then again, they never should have been in that spot in the first place.

TFC had DC United locked down, only to incredulously cough up an equalizer deep into stoppage time. Late letdown aside, the Canadian side are right up there among the league’s elite when it comes to a formidable attack. TFC can hit you hard and fast, while the fact that this was done without Jozy Altidore is even more impressing.

For all the unpredictability that comes with the MLS playoffs, it is nice to know that we can still rely on several things, one of which is Dairon Asprilla always scoring for the Portland Timbers in the playoffs. “Senor Octubre” did it again by thumping in a header to bring Portland level 1-1 with Real Salt Lake early in the second half of their Saturday night affair, giving the Colombian four goals in four different MLS playoff campaigns.

Asprilla gets more attention for his heroics but he faces a new rival from across the pond in Damir Kreilach. The Croatian scored a goal of his own and now has four goals in four playoff matches with RSL. There’s something about the MLS postseason that seems to motivate the 30-year-old and you wouldn’t bet against him to do it against in Seattle.

One can also make the argument that Nick Rimando falls into the “Mr. October” category as well. The soon-to-be-retired stopper made a number of crucial saves in the second half to keep things level before Jefferson Savarino won it late 2-1 for RSL.

The LA Galaxy were the lone road team to emerge victorious over the weekend and it came when superstar Zlatan Ibrahimovic was not at his best. Still, some poor finishing from Minnesota United, plus heads-up poaching from Sebastian Lletget and a golazo from Jonathan dos Santos, earned a 2-1 win for the Galaxy and a conference semifinal date with city rivals LAFC.

It’s a cruel fate for Minnesota, who had an excellent season, and there will be a lot to learn from it. However, for now, buckle up for 24/7 El Trafico until Thursday night (10:30 p.m. ET, ESPN).

The new one-and-done format of the MLS playoffs is a winner.

The games were open and teams were forced to be proactive, meaning everyone was spared the 0-0 snoozers that plagued first legs in years’ past. Of the six games, five home teams advanced to the next round, something that playoff contenders will no doubt keep in mind as they enter the home stretch of future seasons.

MLS got this one right.