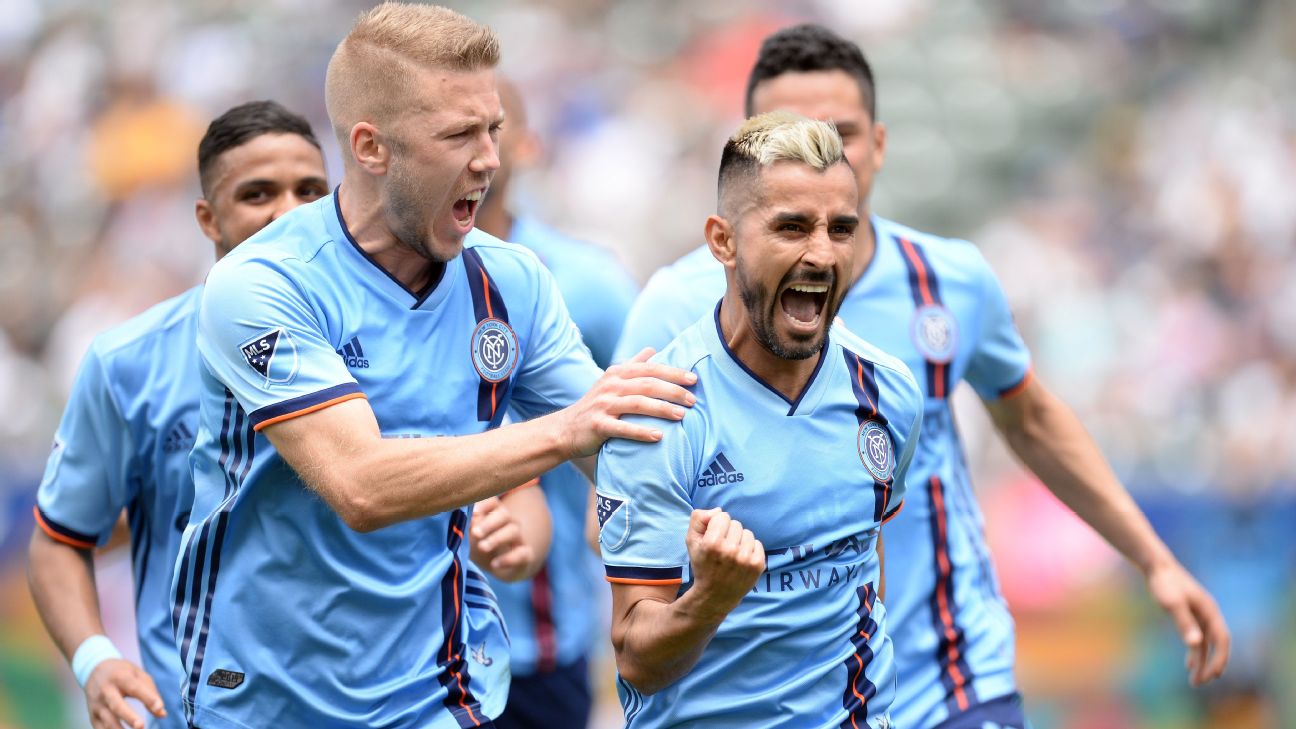 In 2019, LAFC tore up the Major League Soccer record books, scoring a ridiculous 85 goals, posting a plus-46 goal differential and notching 72 points. But while Bob Bradley’s juggernaut struggled down the stretch, winning just two of their last eight matches and looking vulnerable for the first time all year, a club across the country used an impressive final two months of the season to install themselves as serious MLS Cup contenders.

Thanks to just a single loss since Aug. 11, New York City FC finished on top of the Eastern Conference, six points clear of Atlanta United. The key? An inspired attack that posted 63 goals, good for second in the league. Heading the offense is a diverse quartet of Heber (15 goals, 4 assists), Alexandru Mitrita (12/3), Maxi Moralez (7/20) and Valentin Castellanos (11/7), all of it embodying the all-team philosophy instilled by head coach Domenec Torrent.

At their best, NYCFC produce beautiful goals and while last season’s attack revolved around a certain Spaniard, this year’s is more dynamic because of the lack of focus on one specific player.

“We know the force that was David Villa,” Moralez says. “He was a player who was able to score many important goals for the club. Luckily now that is spread more throughout the team and it doesn’t fall on just one player. Now we have [Castellanos], Heber, [Mitrita], Ismael [Tajouri-Shradi], [Alex] Ring, and it’s different from the last season.”

Castellanos, the youngest of the group at 21, agrees.

“This group is different because of the bond there is,” he says. “The majority of the players are very young, which allows for a great atmosphere on the pitch. The team is very united, which is important. It has created a healthy competition on the field.” That healthy competition resulted in three players — Heber (1.09), Moralez (0.85) and Castellanos (0.79) — finishing in the top 10 in MLS in goals plus assists per 90 minutes without penalty kicks.

– MLS playoffs: Who is in? | Stream LIVE games on ESPN
- Why your club will win MLS Cup … and why it will not
– Zlatan is MLS’s best-ever DP | Tim Howard says goodbye

Moralez, a Designated Player who re-signed for two more years earlier this month, is the oldest at 32 and the leader of the group. During Heber’s first week with the team, Moralez invited the Brazilian to eat dinner with his family as a way to help his transition. “I never have this before in my life,” Heber says. The group goes out to dinner, too. “We usually eat grilled food and we take advantage of our off days to go eat,” Castellanos says. (He “gets along really well with [Moralez’s] kids.”)

The locker room is a blur of languages and sounds, someone playing DJ with a phone and portable speaker, a mix of American and Latin hip-hop. The team communicates in English, mostly, although Moralez can speak Italian to Romanian international Mitrita, whose English is improving. “My life has changed totally,” the 2019 DP signing says. “I’ve found a good group here. A good team, a good staff, a good coach. For me it was an important step in my career.”

Heber, who joined the team in March from Rijeka in the Croatian first division, tallied his 15 goals in just 21 matches. He’s a goal scorer at heart, 66 total goals in 116 games since 2015. If Moralez is the facilitator, the Brazilian is the finisher.

“I always tell him he has similarities to [Cristiano] Ronaldo,” Castellanos says. “He has similar movements to him and I learn here and there from him. He’s a great player, has great movements and is a great goal scorer. He has his experience and I try to copy his movements so I can learn for the future.”

Plus, the celebrations are special. “Heber and I, we like to dance,” Castellanos says. “That’s why when we do goals, we celebrate with joy, so that’s why we dance.” He declined to say who he thinks is a better dancer.

Now all that’s left is the playoffs, where NYCFC will try to get out of the conference semifinals for the first time in their history. Their inaugural campaign ended with a shock loss to the underdog Columbus Crew and 2018’s run finished at the hands of eventual champions Atlanta United.

This year, they’ll be the favorites against either Toronto FC vs. D.C. United and, should they get through that match, whomever they face in the conference finals as well. They’ll be playing in front of a home New York City crowd, although perhaps not in the tiny, friendly confines of Yankee Stadium depending on the Major League Baseball playoffs.

Dust off those dance moves. New York City, led by four guys in the attack, is coming.