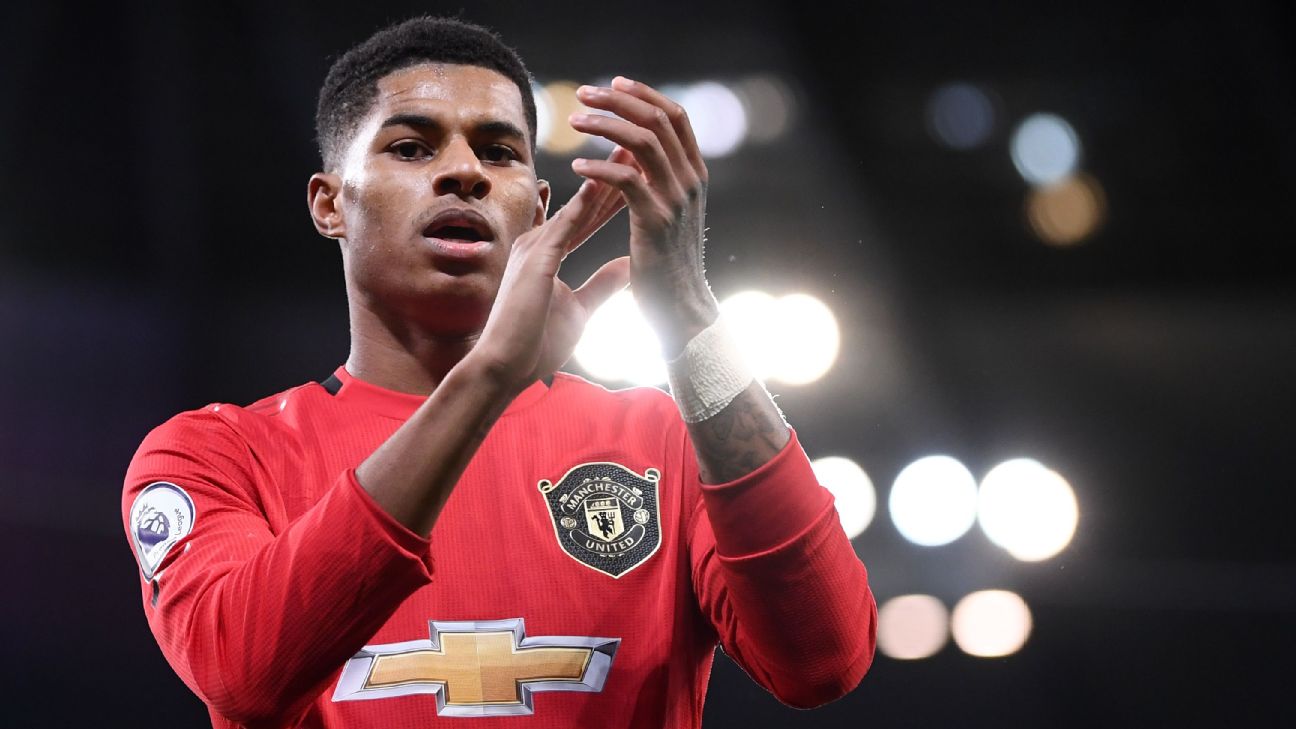 Another wild weekend in the Premier League is done and dusted. We get you caught up on the action with the Weekend Review.

Rashford shows his worth to Man United … again

Manchester United are an odd team. They have lost to Crystal Palace, West Ham, Newcastle and Bournemouth but have beaten Chelsea, Tottenham, Leicester and, on Saturday, Manchester City. They are the only team to take a point off Liverpool this season.

Other than offering a vague notion that they are a “big-game” team, whatever that means, Ole Gunnar Solskjaer’s men are tough to work out. What does make sense, though, is the performances of Marcus Rashford, who scored his 10th league goal of the season against City and has 13 in his past 14 for club and country.

Yet beyond his goal at the Etihad Stadium, a penalty that he won and then coolly slotted away, what stood out was the constant sense of menace that surrounded him. One moment stuck out, just after he scored, when Rashford sprinted down the left channel in a counterattack so quickly that it looked like a tape on fast-forward; he was more than 5 yards past Bernardo Silva before the City man noticed.

The problems that have caused United to lose ludicrous games remain, and Solskjaer still has plenty to do to convince anyone he is the long-term answer as manager, but though there is uncertainty elsewhere, they can be sure that they have an icon in waiting.

In American sporting parlance, Rashford would be called a “franchise player” around whom a club can build. As long as he is around, United have half a chance.

With Fernandinho retreating into central defence, having stepped into midfield briefly, he pointed Rodri toward the United player with the ball. The Spanish international closed but did not put in a convincing challenge; a one-two with Daniel James later, Martial shot into the bottom corner.

Pep Guardiola said last week that he likes Fernandinho as a centre-back — not an outlandish call — but the 34-year-old seems caught between two positions, plugging away in his new role but also feeling like he has to tell those ahead of him what to do in his old spot.

This was not the first or only time that Rodri had let a man go or allowed too much space in front of the City defence. Several issues have led the defending champions to trail Liverpool by a (presumably unassailable) 14-point gap, but this is one that looms largest.

It was not so much the blistering run that was impressive about Son Heung-min‘s goal-of-the-season contender in Tottenham’s 5-0 thrashing of Burnley but more that he had the presence of mind to finish so coolly.

Even a professional athlete is going to be a little fuzzy after sprinting the length of the pitch, but Son simply stroked the ball home as if completing a mild training jog. It was a goal that encapsulated the player neatly: Incredible work rate, brilliant skill and clear thinking.

Meanwhile, it feels like everyone takes Harry Kane goals for granted, but his brace against Burnley took him to 25 in 26 games for club and country this season. Tottenham have a minimum of 26 games remaining, and so, fitness permitting, he could easily eclipse the 41 he managed for Spurs alone in 2017-18, a season he finished by winning the World Cup Golden Boot.

Chelsea have generally played well with a young squad, and the last thing they need is for development to be stunted by the arrival of flashy signings, but the 3-1 defeat to Everton was a third reverse in the past four league games, and recent form suggests that Frank Lampard’s squad needs reinforcement in January, now the club’s transfer ban has been lifted.

They are all set in goal, they have two terrific right-backs at either end of the experience scale, they seem well-stocked in midfield, and they are probably good for wingers, but Chelsea could do with another striker (particularly if Olivier Giroud wants out) as well as a left-back and — definitely — a centre-back.

Antonio Rudiger is inching his way back to fitness, but Andreas Christensen is nobody’s idea of an elite defender, Fikayo Tomori is a great prospect but possibly not quite ready for a full season, and Kurt Zouma looks increasingly like a liability. Chelsea should not allow sentimentality to stop them from making the most of this transfer reprieve.

Ferguson injects some emotion into Everton

There is a reason fans should not get involved in football’s cold-blooded decision-making processes. Who among the emotional lovers of the game, for example, would not immediately give Duncan Ferguson a five-year contract as Everton manager after seeing him hug Tom Davies and Dominic Calvert-Lewin — two players he has watched grow at the club — so tightly during the win over Chelsea?

But beyond whether Ferguson would be a good choice long-term — his tactics on Saturday were not exactly sophisticated — it was good to see an Everton team not looking quite so sad. That the temporary boss has injected a little vim and enthusiasm at Goodison Park was clear from the first minute. It might not last long, but enjoy it while it does.

Lewis Dunk was certainly being innovative when he tried to nudge the ball along the floor with his head in Brighton’s 2-2 draw with Wolves, but after said ball rolled onto his arm, he was fortunate not to concede a penalty.

Maybe Brighton were due a bit of luck?

Bournemouth are in trouble

When Eddie Howe said last week that he was embarrassed about speculation linking him with the Everton managerial position because of recent results, he was telling the truth. Bournemouth have lost their past five and sit a point outside the bottom three.

Their injury problems are significant — Nathan Ake‘s departing after only 35 minutes of the 3-0 home defeat to Liverpool is not going to help anything — but they face Chelsea next weekend and could easily be in the relegation zone at Christmas.

When Newcastle lost 5-0 to Leicester in September, it was tricky to forecast anything but misery and relegation. In the nine games since, they have won five, lost two and drawn two, including Sunday’s come-from-behind win against Southampton.

There are still problems at St. James’ Park, and the fact that no Newcastle striker has scored since Joelinton netted at Tottenham in August is a significant concern, but Steve Bruce nevertheless deserves a pat on the back for finding a system that is eking out results and has dragged them to 10th, two points off fifth.