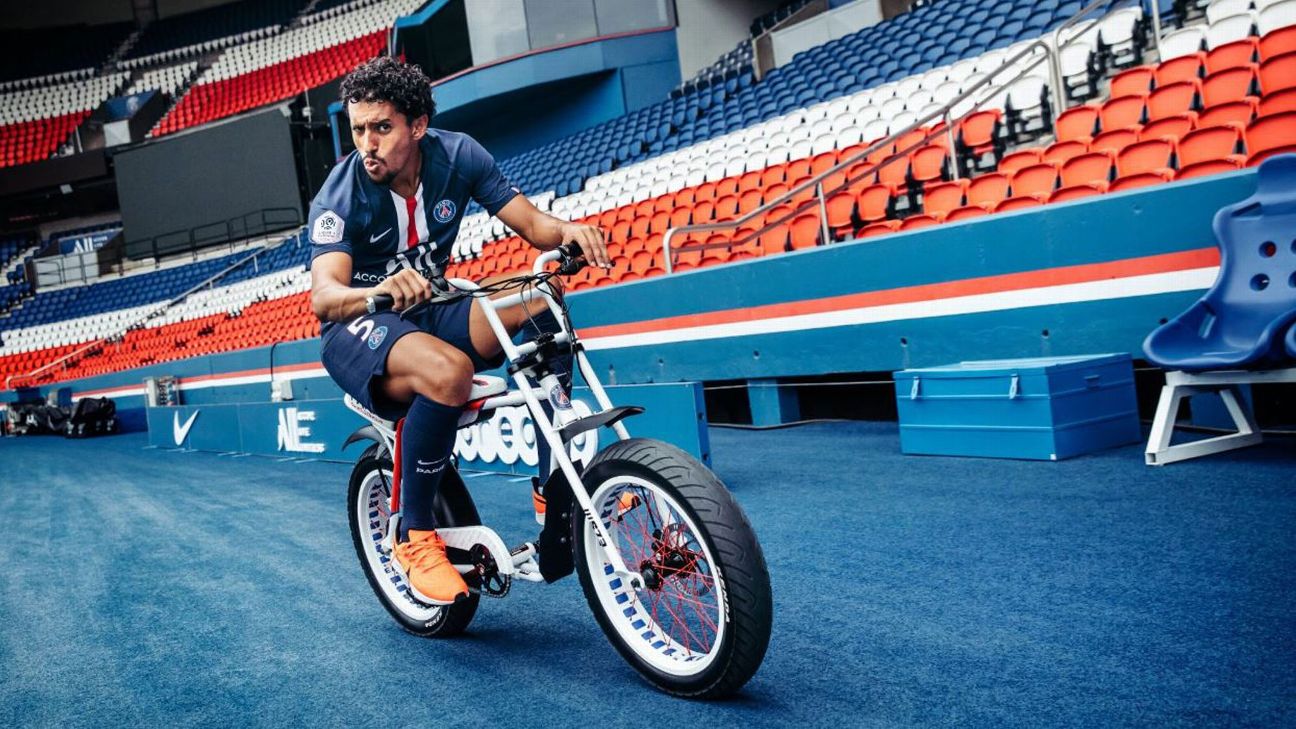 Paris Saint-Germain have launched an electric bike branded in the club’s colours, just the latest in their vast collection of merchandise tie-up deals…

PSG are definitely not shy when it comes to merchandising their brand, with the Ligue 1 champions racking up heaps of commercial deals, partners and projects over the past few years.

Les Parisiens‘ recent transformation into one of the world’s richest clubs, the club’s relatively young age (turning 50 next year) and the need to avoid falling foul of UEFA’s pesky FFP rules means that every opportunity to grow the PSG brand and generate revenue must be explored.

The latest venture sees PSG joining forces with SUPER73 to launch their very own line of limited edition electric bikes — yours for just €1,670 (around $1,850).

Outlandish as it may seem, electric push bikes are only the tip of the iceberg when it comes to bizarre PSG merch.

In October, PSG struck a partnership with the Guassin Group, who will now be using the club’s training complex as a testing site for their driverless cars and associated technology.

OFFICIAL: PSG partner with Gaussin for the long-term ahead of the 2022 opening of the club’s new training base. pic.twitter.com/hAlRKfvqCi

Before that came the news that, thanks to a partnership between the two parties, Deliveroo can now deliver food directly to fans in their seats at the Parc des Princes during PSG matches.

Naturally for a club based in Paris, PSG have sidled up to several other big-named designers, with Jordan perhaps being the most prominent collaboration.

Elsewhere, PSG have also produced a line of high-end streetwear with A Bathing Ape, including this excellent boggle-eyed shark print hoodie.

Only recently did they sew up a deal with Italian brand Replay to become their new “official denim partner” because football and jeans are a match made in heaven.

The club also teamed up with the Rolling Stones to create a line of special edition merch, including snowboards, motorcycle helmets and this rather nifty away jersey — all plastered with “the tongue.”

Skaters were also catered for, with PSG joining forces with Andrews to knock out a line of designer decks.

What better way to go head-to-toe in PSG branding than by completing your outfit with a pair of official PSG Nike Air Max sneakers.

Those seeking to ferry their wares about in PSG branded luggage were also given the opportunity thanks to a deal with Herschel, who created a custom capsule of tricolore backpacks, duffle bags and overnight cases.

Of course, no club can truly be considered elite until they boast their own official timepiece partners. In PSG’s case, it’s Hublot.

The very olfactory essence of PSG was also captured by Al Jazeera perfumes, who produced four scents that were supposedly emblematic of the smell of Les Parisiens.

With a succession of highly questionable VAR decisions blighting Premier League football recently, steps are already being taken to improve the system.

Indeed, Vodafone are hoping to change all that with the launch of fan-assisted refereeing (FAR). The communications company recently debuted FAR in the smallest football league in the world, contested between two teams on the Isles of Scilly, as a marketing stunt for their new 5G mobile network.

The Vodafone FAR system allows fans to review incidents seconds after they occur during matches and have their own say on fouls, offsides, penalties, disputed goals, etc. Instead of referring contentious decisions to VAR officials, the referee in charge can seek the opinion of fans who are able to watch multiple replays of incidents using their 5G connection and then vote on the outcome. The ref can then use the results of the poll to inform his decision.

Of course, it’s nothing more than a marketing gimmick but if the footballing authorities are insistent about removing referees’ influence then at least FAR means fans will only have themselves to blame when dodgy decisions are made — not five anonymous agents sat in a bunker on the outskirts of London.