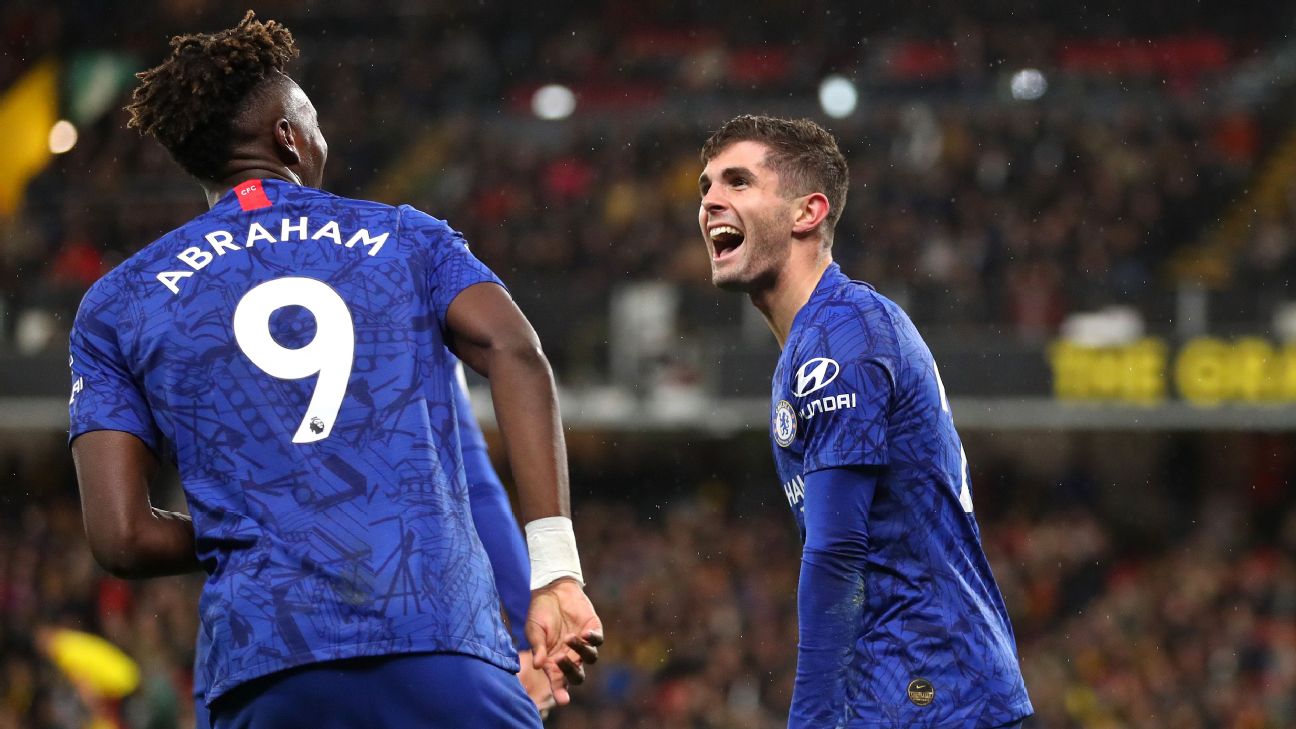 Chelsea continued their strong run of form in the Premier League as they defeated Watford 2-1 at Vicarage Road. Tammy Abraham opened the scoring after just five minutes following a tremendous pass from Jorginho, with Christian Pulisic adding to the lead as Abraham turned provider.

Gerard Deulofeu halved the deficit from the penalty spot, after a controversial VAR review, with just over 10 minutes remaining, but Chelsea held on to claim all three points and keep the pressure on Liverpool and Manchester City.

Chelsea kept the ball on the deck and played some slick, fast-paced football that caused the Hornets all sorts of problems. They consistently worked their way up from the back and found openings in really tight positions, further showcasing the kind of cohesion and team chemistry that has been built up over the course of the last few months.

— Ogden: Pulisic not a Premier League star just yet

Chelsea kept the ball on the deck and played some slick, fast-paced football that caused the Hornets all sorts of problems. They consistently worked their way up from the back and found openings in really tight positions, further showcasing the kind of cohesion and team chemistry that has been built up over the course of the last few months. Chelsea also fired 16 shots, 10 on target, yet only managed two goals.

8 — Frank Lampard put forward a formation and team that knows how to keep it tight and work their way through the middle, and it worked wonders for the Blues. The former Chelsea midfielder quite clearly has this team playing for the name on the front instead of the back, and that kind of leadership shows on the pitch.

GK Kepa Arrizabalaga, 7 — Was a non-factor for large periods of the game but was comfortable enough when called upon. Couldn’t do much about the penalty which was well taken, but made a vital save from opposing goalkeeper Ben Foster in the final seconds to seal the win.

DF Cesar Azpilicueta, 6 — Continually gave the ball away in dangerous positions and serves as one of the biggest worries for Lampard within his starting XI.

DF Kurt Zouma, 7 — Cleaned things up at the back with confidence and composure, and produced a few vital challenges in the second half that helped the Blues to maintain their lead.

DF Fikayo Tomori, 7 — Shows good positional play at times but needs to work on his decision-making, which can be described as shaky at best. In terms of his pace, though, nobody comes close to his level.

DF Emerson, 6 — Has a tendency to be a bit too instinctive both in a defensive and attacking sense. Allows the ball to run past him more often than not and comes across as overconfident at times.

MF Jorginho, 7 — Provided one of the assists of the season with a wonderful through ball for Tammy Abraham’s opener. Turned from hero to villain by conceding a sloppy penalty, and also picked up a yellow card for time wasting which will lead to a suspension.

MF Mateo Kovacic, 8 — Offers the kind of stability in the middle of the park that Chelsea so desperately need. Whenever he’s on the ball, there are few reasons to worry.

MF Willian, 6 — From time to time he’ll pick out a great opening out of absolutely nothing, but gives the ball away far too often.

MF Mason Mount, 6 — Had a thunderous effort tipped onto the bar by Foster early in the second half. Needs to learn how to adapt to the No. 10 role after a tough game.

MF Christian Pulisic, 8 — The American’s great vision allows him to spot passes that nobody else can. Shows endless creativity from pillar to post, and did well to finish off the second goal of the game.

FW Tammy Abraham, 8 — Did brilliantly to loft the ball over Foster for the opener to continue his strong start to the season, and also put the ball on a plate for Pulisic’s goal. Always looks like a threat and has great awareness in and around the box.

DF Reece James, N/R — Allowed the seconds to tick down in the few moments he was on the pitch.

MF Callum Hudson-Odoi, N/R — Looked active when coming on but wasn’t given much time to make an impact.