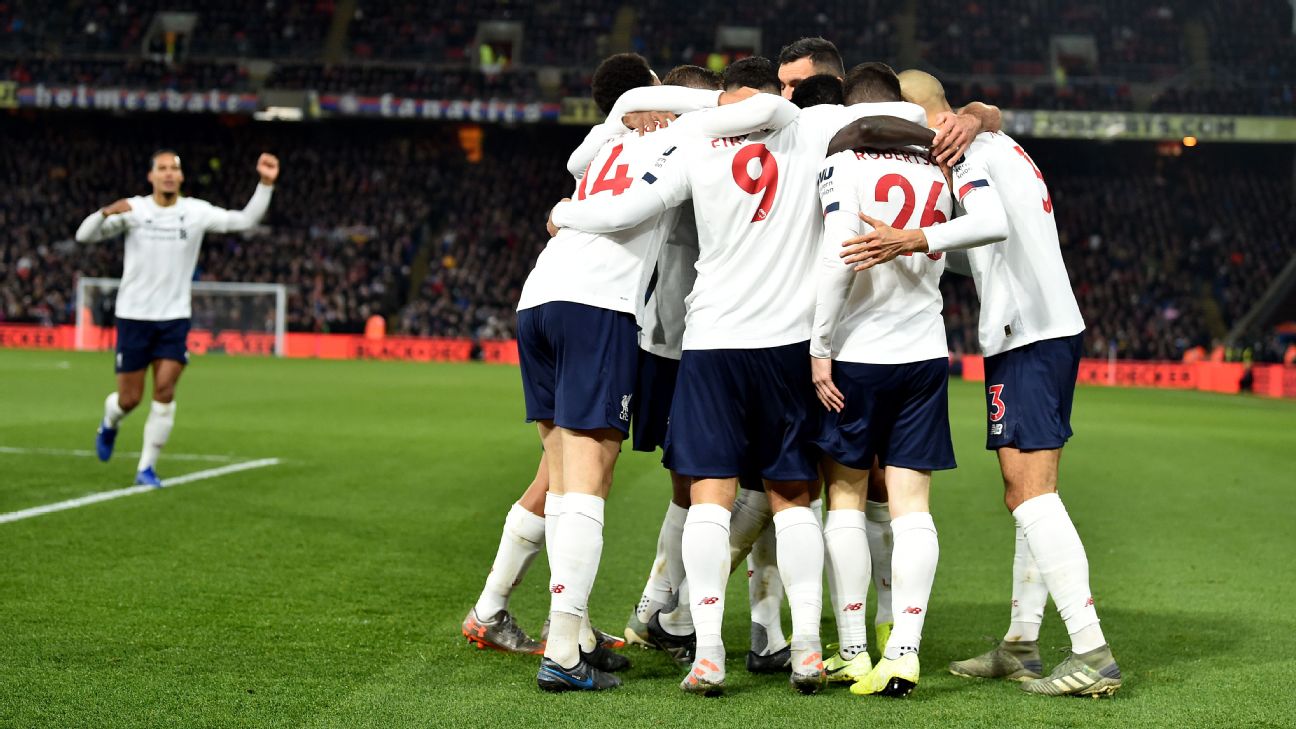 But the reason they’re eight points clear at the top of the Premier League and holding steady on their course for a first title in 30 years is that they’re more than that. They don’t have to be in full flow to win.

They’re winning games scruffily, calmly, luckily. Through sheer force of personality, through skill, through brilliant goals. By taking full advantage of mistakes, by calmly taking control of games, by just refusing to give up. By any means necessary, in short.

For this 2-1 win over Crystal Palace, they combined scruffiness and calmness, reacting brilliantly twice. Firstly to a disjointed first half in which the hosts had a goal disallowed by VAR, taking the lead through Sadio Mane (the No. 2 ranked winger in the ESPN FC 100) early in the second half; secondly by almost instantly hitting back after Wilfried Zaha had equalised, Roberto Firmino stabbing home the winner through a chaotic goalmouth scramble.

This was their seventh success by one goal this season, with six of their past seven victories coming by that margin, three of which came thanks to goals after the 85th minute.

“Today it was absolutely no problem that we weren’t brilliant,” said Jurgen Klopp (the No. 1 ranked manager in the ESPN FC 100). “Because in a game like this you just have to make sure you’re ready to fight for the result. We did that from the first minute.

“Could we have played better? Yes. But on Thursday morning we still had players on their way back from Abu Dhabi [where Brazil played South Korea on Tuesday], which is not too cool. We never take getting a result at Palace for granted, so that feels good.”

Early in the game Palace seemed to target Trent Alexander-Arnold as a potential weak link, pressing and harassing him whenever he got the ball. It worked initially. In the first 20 minutes alone he played three awful, rushed passes, one of which conceded a corner from near the halfway line, another led to Jordan Ayew missing a simple chance from 8 yards out.

Alexander-Arnold could easily have been rattled, but after a shift in formation from the 4-4-2 employed in the absence of Mo Salah to the usual 4-3-3, he cleared his head and settled into the game. That’s a theme of this Liverpool side, both in general and in this game.

Palace were the more threatening team before the break: Liverpool had more of the ball, but the home side created better chances, not least the goal they had disallowed just before the break when James Tomkins slid into acres of space at the back post to head a free kick from deep in the left corner home.

This was a decision that displayed the best and worst elements of VAR, which has been neither Liverpool’s friend nor enemy this season. The worst, because everyone stood around for about two minutes as referee Kevin Friend pressed his finger to his earpiece like a baffled presidential bodyguard, nobody really sure what was going on. The best, because the decision was probably correct.

Right or not, at least it was consistent. Jordan Ayew’s push on Dejan Lovren was slight, but about the same level as the one by Alexander-Arnold on Zaha that led to the free kick. The incident was replayed on the big screens afterwards, which given it wasn’t exactly an obvious foul, didn’t help the mood in the stands — a few minutes later, the home fans called for VAR over the award of a throw-in. Nice try.

After the break, Mane quickly gave them the lead with a decisive finish, and Liverpool seemed to play with a cool, detached calmness and controlled the game pretty easily. They pressed when they needed to, slowed things down when they needed to and Klopp made a positive substitution at the perfect time, bringing on Divock Origi for Alex Oxlade-Chamberlain to press the advantage home.

But that coolness was tested when Zaha equalised, requiring another switch in mentality from maintenance of the status quo to chasing the game. It took them three minutes, Firmino scuffing home his first goal since September before anyone on their side really had chance to get nervous. They retook the lead so quickly that Mo Salah, summoned from the bench straight after Zaha’s goal, didn’t even have time to come on.

“With all the things today that weren’t so good we were always the dominant team, the more active team,” said Klopp. “We don’t stop with these things even won on a day when it’s not perfect. We concede a goal, and we can see in the face of the boys [that another chance will come].”

There were moments of defensive uncertainty that may give Klopp some concern. The space in the area Tomkins was given for the goal that didn’t count; the space in the area Zaha was given for the one that did; the space Zaha was given in injury-time for an effort he inexplicably booted into the Holmesdale Road end. A better team with better fortune will take better advantage of those moments.

But for now though, Liverpool are eight points clear of second-place Leicester and the sort of real, tangible weaknesses that might lead to them throwing away that advantage are becoming increasingly hard to find.

“37 points after 13 matches is exceptional,” said Klopp. “And you can’t have that after only winning brilliant games. We’re not out there to send messages, we just want to get results.

“We’re not out there to show we invented football. We have a job to do.”