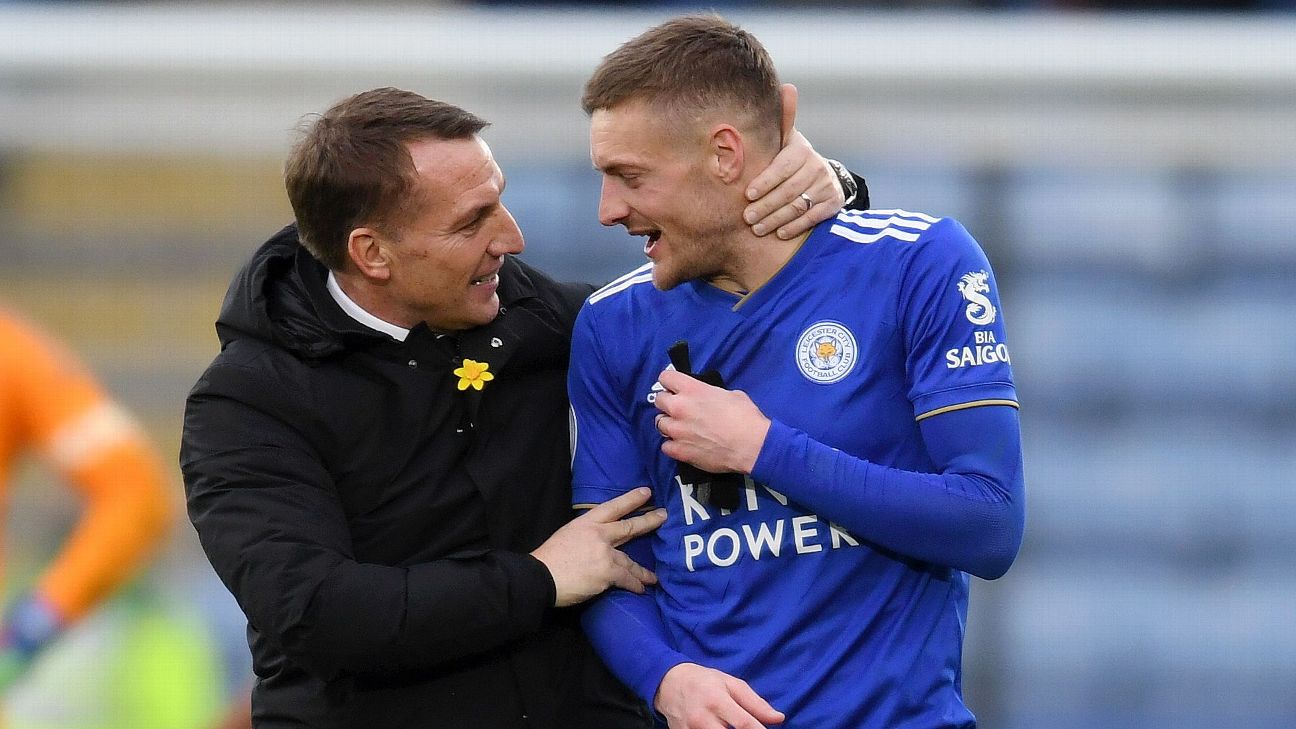 Four seasons on from their astonishing 5,000-1 Premier League title win, could Leicester City shock the world all over again?

It is possible that Brendan Rodgers’ slick and attractive outfit might even be better than the Claudio Ranieri version that caused football’s biggest upset. The difference, though, is that this season’s Foxes will need far more than the 81 points that brought them glory in 2015-16.

That total put them a full 10 points clear of runners-up Arsenal, so it was not a freak or a lucky triumph; Leicester were by far the best team. But this season they are up against the Liverpool winning machine and a Manchester City side that has won the past two titles with 100 points, then 98, not to mention a dangerous young Chelsea team.

So the bar is higher and, even after four consecutive wins, Jamie Vardy & Co. are eight points off the summit occupied by a seemingly invincible Liverpool. The two teams met at Anfield in October and Leicester were beaten only by a contentious late penalty.

Their only other defeat was by a single goal at Manchester United on a September day they rather misfired. More recently, Leicester’s 9-0 victory at Southampton was evidence of their creativity, firepower and ruthlessness. It was the biggest away win in English top-flight history, dating to the 19th century.

Man for man, then, which team is better: Ranieri’s or Rodgers’?

Kasper Schmeichel was No. 1 then and now, and remains a high-class last line of defence.

Ranieri’s back four was made up of players given a near-miraculous makeover: Danny Simpson, Wes Morgan, Robert Huth and Christian Fuchs were journeymen transformed into champions. They were not the most gifted individuals but were superb as a well-drilled unit. You would not argue with Morgan or Huth, even on the phone.

At Rodgers’ disposal are the dashing Ricardo Pereira and elegant England international Ben Chilwell on the flanks, with a surprisingly effective pairing of Jonny Evans and Caglar Soyuncu in the middle. With just eight goals conceded, this quartet boasts the league’s best defensive record; quite an achievement given many thought they might struggle without Harry Maguire.

Forced to choose, you might say that Rodgers has the more talented individuals, but the Ranieri defence just gets the vote for “over my dead body” resilience across a full season.

Ranieri’s engine room was held together by the tirelessly effective, Mini-driving N’Golo Kante and Danny Drinkwater, who performed at the peak of his powers. Both were sold to Chelsea for a combined total of £65 million.

The 2015-16 team also had PFA Player of the Year Riyad Mahrez, who caused havoc on the right and gets the nod over current incumbent Ayoze Perez. Marc Albrighton, a one-time Aston Villa reject, performed wonderfully on the left.

Rodgers’ midfield has a different feel, with more technicians and class. Wilfred Ndidi is a key man in the anchor role and sets a platform for the artistry of Youri Tielemans and the ideas and clever touches of James Maddison. Meanwhile, speedy youngster Harvey Barnes provides width and menace from the left.

It is another close-run thing, but the present edition has more flair and more ways to hurt the opposition.

Ranieri once asked, “Why play 20 passes if you only need two,” and his team won the title averaging 42% possession. Sitting deep, they could nick the ball and, in the blink of an eye, switch play to get Vardy racing behind bewildered defences, helped by Shinji Okazaki, who operated just behind and did so much work that he was a fifth midfielder and a second striker rolled into one.

Rodgers’ team is arguably more sophisticated and patient in possession, technical enough to look after the ball, work openings and suddenly change the pace of an attack to strike (see their second goal at Crystal Palace earlier this month).

Vardy, like Schmeichel, has been part of both teams. He was voted Footballer of the Year by writers in 2015-16, but if anything seems better than ever now. With 11 goals this season, including eight in the past six games, the 32-year-old leads the league in scoring and has 70% of his shots on target (by comparison, Tammy Abraham averages 63% and Sergio Aguero is at just 40%).

Leicester fans could surely not have dreamed that, so soon after the magical “Dilly Ding, Dilly Dong” year under the ever-genial Ranieri, another very good team would emerge. Rodgers, who came so close to the title with Liverpool in 2013-14, is rightly playing things cool but has to be excited.

Time will tell if they can stay the pace. How well, for example, could Leicester cover a long-term injury to Vardy, Ndidi, Maddison or one of the central defenders? Does the squad have enough depth?

Given a fair wind and the good luck Ranieri enjoyed in avoiding injuries, though, this very watchable team already seems booked in for a top-four finish and a place in next season’s Champions League … at the very least.