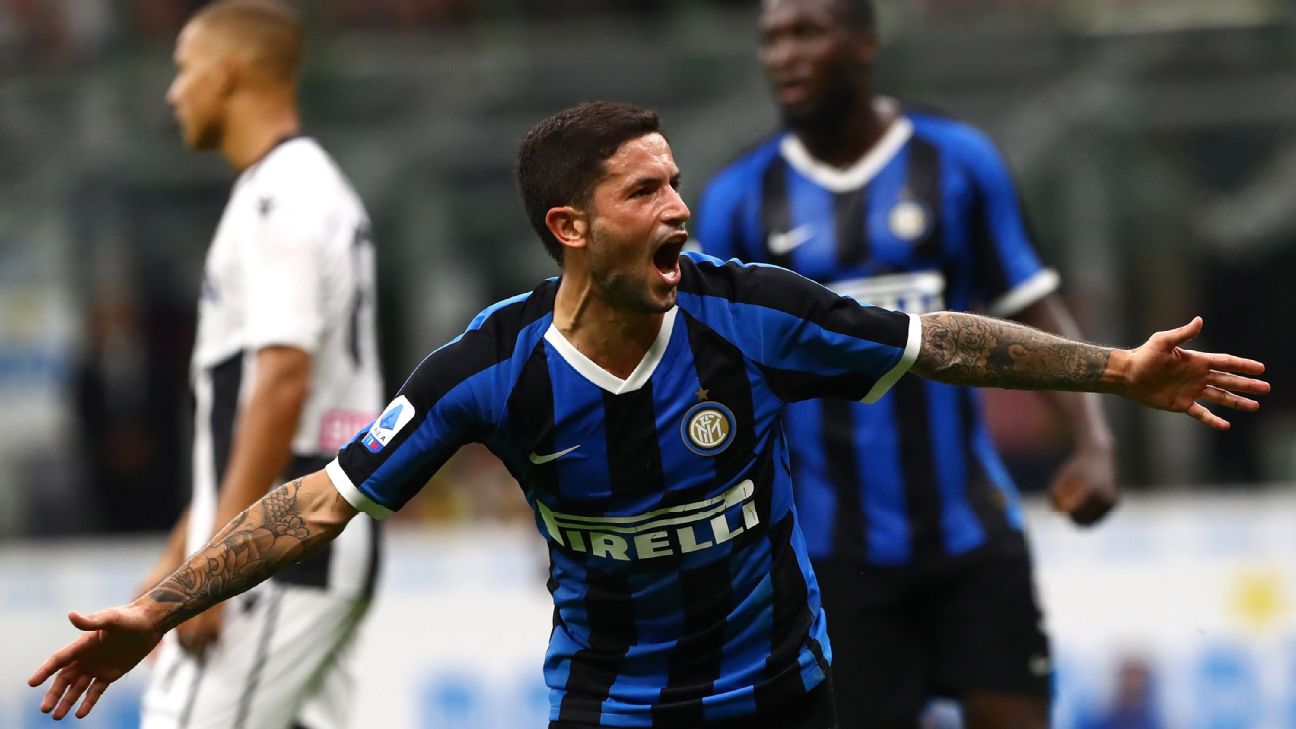 As Serie A resumes, we thought it’d be an idea to take the temperature of Italy’s top six and, in particular, highlight the work that still needs to be done at each of them.

The Bianconeri are back at the top of the table and have already defeated Napoli and Inter. Perhaps it’s a coincidence, but the team’s improvement accelerated around the time of Maurizio Sarri’s recovery from pneumonia and his return to taking training sessions.

The switch to a 4-4-2 diamond, prompted by the injury to Juventus’ most impactful player at the start of the season, Douglas Costa, not to mention the quantity and quality of midfielders at Sarri’s disposal marked a turning point. The team is now fitter and better able to sustain playing a high line with greater intensity.

Still undefeated, the performance in the Derby d’Italia felt like validation for the board’s decision to dismiss Massimiliano Allegri and appoint Sarri. It hasn’t been easy. The squad did not get thinned out in the summer. Emre Can was disgruntled at being cut from the Champions League squad. Juventus lost captain Giorgio Chiellini to ACL surgery and the right-back position has been so decimated Juan Cuadrado is reinventing himself.

Blaise Matuidi‘s importance has come as a surprise. Miralem Pjanic is arguably playing the best football of his career, and Paulo Dybala and Gonzalo Higuain are doing everything they can to prove the club wrong for attempting to sell them. Sarri still needs to integrate Adrien Rabiot, which is easier said than done given the work Matuidi gets through covering for Cristiano Ronaldo.

Aaron Ramsey has made much more of an impact, making the switch to the diamond possible. But if his body lets him down again, one wonders whether Sarri will be tempted to have another go at playing Dybala, Higuain and Ronaldo simultaneously. The upcoming games against Lecce and Genoa present an opportunity for that.

The Nerazzurri went into the international break overtaken in Serie A and with a reality check after consecutive losses in big games against Barcelona and Juve. It was unfortunate the Derby d’Italia came at the end of seven games in 21 days, and in particular after 45 minutes short a man at Sampdoria and 90 energy-sapping minutes at the Camp Nou, where they played excellent for an hour and deserved a lot more than their 2-1 defeat.

This is still Inter’s best start since 1966. They were triumphant in the Milan derby. The defence has kept more clean sheets than anyone else’s. Antonio Conte has revived lost causes like Antonio Candreva, and, apart from Valentino Lazaro, all of Inter’s new signings, in particular Stefano Sensi, have hit the ground running.

The last week before the international break did throw up some interesting questions, though. Inter’s best performances have coincided with Alexis Sanchez, not Romelu Lukaku, partnering Lautaro Martinez up front. The former’s suspension for the Derby d’Italia hurt Inter and the injury he sustained with Chile now limits Conte’s options up front with Sebastiano Esposito being told he can no longer go to the Under-17 World Cup.

Lukaku remains Inter’s joint top scorer (3) but one goal in six has tempered the enthusiasm around his acquisition. Conte teams are never dependent on one player for goals, though. They spread them around, and Inter already boast eight different goal scorers this season, many of them coming from midfield. That said, it has been noticeable that Inter’s least convincing displays have come either when Sensi has been rested (see the first half against Lazio) or been withdrawn through injury (like in the Derby d’Italia). Conte needs to work on contingencies.

Defeats to Dinamo Zagreb and Shakhtar Donetsk and the upcoming doubleheader against Manchester City mean Atalanta’s immediate Champions League future is bleak. But at the rate they’re going in Serie A, Gian Piero Gasperini’s side will be back in the group stage next season.

This is the Dea‘s best start to a campaign since 1961. Broken up every year, the team stayed together this summer and the continuity that comes from keeping your best players has allowed Atalanta to pick up where they left off in May and go firing out of the blocks.

The squad is better, too. In Ruslan Malinovskiy, they have found a player who is as polished technically as Josip Ilicic and Alejandro Gomez. His impact has been instant. The same can be said of Luis Muriel, who came off the bench and helped Atalanta complete a comeback win against SPAL on the opening day of the season. The Colombian has the best minutes-per-goal ratio in the league and they need him to step up now that Duvan Zapata is injured.

Only Robert Lewandowski, Kylian Mbappe, Karim Benzema, Lionel Messi and Sergio Aguero have scored more goals than him in Europe’s top five leagues this calendar year. Exalted company indeed and his record, particularly, on the road means his importance cannot be understated. Whether Muriel can carry the load without him remains to be seen. Atalanta are second in expected goals behind Bologna. Chances will come his way.

The question mark is whether Muriel can buck the trend of his career and stay consistently healthy while his compatriot recovers. Goals for Atalanta come from all angles — recall Zapata did not break his duck until November last season — and Robin Gosens, in particular, is in flying form. A second series of seven games in 21 days will stress test the squad, but Atalanta aren’t in transition like some of the other teams vying for a top-four spot.

By his own admission, second is not enough for Carlo Ancelotti. It’s time to win the league or a cup. The issue is Napoli already find themselves six points off the top, and the past four games in particular have caused their stock to fall. The received wisdom is Ancelotti has yet to strike the balance between the out-of-control 4-3 wins and defeats at the start of the season and the goalless games against Genk, Torino and that undeserved 1-0 loss to Cagliari at home.

Don’t make the mistake of thinking Napoli have gone from too attacking to too defensive, though. Ultimately, poor finishing has let them down. The otherwise excellent Dries Mertens hit the woodwork twice against Cagliari. Arkadiusz Milik, who hasn’t found the net in six months, also missed a couple of gilt-edged chances in Genk, and despite Fernando Llorente‘s hot start in Naples, it’s easy to see why the club were so interested in signing Mauro Icardi.

Hirving Lozano may have scored on his debut against Juventus, but he has so far struggled to be as much of a difference maker as he was at PSV. Ancelotti needs to accelerate his adaptation. As for Lorenzo Insigne, he was left in the stands in Genk after disappointing his coach in training. The team captain has not led by example.

Goalkeeper Alex Meret, on the other hand, has had to impress between the sticks because of Kalidou Koulibaly‘s early rustiness and subsequent suspension, to say nothing of how vulnerable the team looks when it loses the ball. Allan has the engine to get through a lot of running (only two players have made more tackles in Serie A this season) but he can’t screen the back line on his own. Ancelotti is now in his second year; the team is no longer Sarri’s and there were no high-profile departures in the offseason. Patience is beginning to wear thin.

Paulo Fonseca has got Roma playing some of the slickest, most attractive football since Luciano Spalletti left. Roma hit 12 goals in Fonseca’s first four games. It took Edin Dzeko 17 games to score the same number (4) last season. The Bosnia-Herzegovina international, who was so close to leaving in the summer, is back to his best. Henrikh Mkhitaryan, already a cult hero with his own song, found the net on his debut. Even Justin Kluivert, a reclamation project that Fonseca’s dedicated to make a success of, has got in on the act.

Pau Lopez (and his post) represents an upgrade on Robin Olsen — see his save on Roberto Soriano in the Bologna game. Aleksandar Kolarov is going toe-to-toe with Lionel Messi for free-kick goals and Chris Smalling — “Smaldini,” if you like — has done better than his doubters expected.

One clean sheet in nine, though, indicates Fonseca still has work to do to make Roma defend better as a team. They took the lead three times against Genoa but couldn’t make it stick, and without the woodwork, which Lazio hit four times, Roma would have lost the derby.

Gianluca Mancini, who got sent off in Bologna and gave a penalty away against Cagliari, is still adjusting to a back four, and it remains to be seen whether Fonseca dusts off the fascinating hybrid system he used in Roma’s only defeat of the season at home to Atalanta. Pundits judged the experiment on the outcome, overlooking the chances Smalling and Nicolo Zaniolo missed and Pierluigi Gollini‘s first-half save on Dzeko.

Overcoming the constant slew of injuries, which have led the club to relay the pitches at Trigoria, is going to be a challenge for Fonseca between now and Christmas. Lorenzo Pellegrini is a big loss and, so far, Roma have played only one of last year’s top six. As for the officiating in some of their games, here’s owner Jim Pallotta.

Sick and tired of this crap costing us games. Too many times already this year https://t.co/0QLAPCXluV

No one talks about them, unless it’s for the wrong reasons, but Lazio have won more trophies than anyone in Italy apart from Juventus in the past eight years. As with Atalanta, the benefits of sticking with their coach and the same group of players are clear.

On the basis of how they’ve performed so far, Lazio definitely merit a higher place than sixth in the table. The frame of the goal saved Roma in the derby, Samir Handanovic transformed into Spider-Man on their visit to San Siro and how they lost to bogey side SPAL on the back of a sparkling first-half display is a mystery.

Lazio have developed a reputation as chokers, but how do you square that with the wins in the Coppa Italia and the Super Cup? It’s also odd how a team that looks as dangerous and prolific in attack as it did in 2017-18 also gives the impression of being profligate. The delightful Joaquin Correa would be a complete attacker if only he could finish. As for Ciro Immobile, he may be top of the scoring charts again but his misses are still as memorable as his goals.

Leaving that aside, Simone Inzaghi still can’t believe his luck at being able to count on Luis Alberto and Sergej Milinkovic-Savic for another nine months. The pair have already shown signs of hitting the heights of the season before last. Sporting director Igli Tare has given Inzaghi more weapons to play with out wide with the pacey Manuel Lazzari filling the void left by Felipe Anderson. As for Jony, the coach still prefers wily old captain Senad Lulic and with good reason given the Spaniard has so far proven a liability without the ball. But his crossing is like manna from heaven.

In keeping with no one talking about Lazio, no one talks about their goalkeeper Thomas Strakosha or centre-back Francesco Acerbi, who, let it be underlined, is the guy Roberto Mancini continues to partner with Leonardo Bonucci in the absence of Italy’s captain Chiellini.