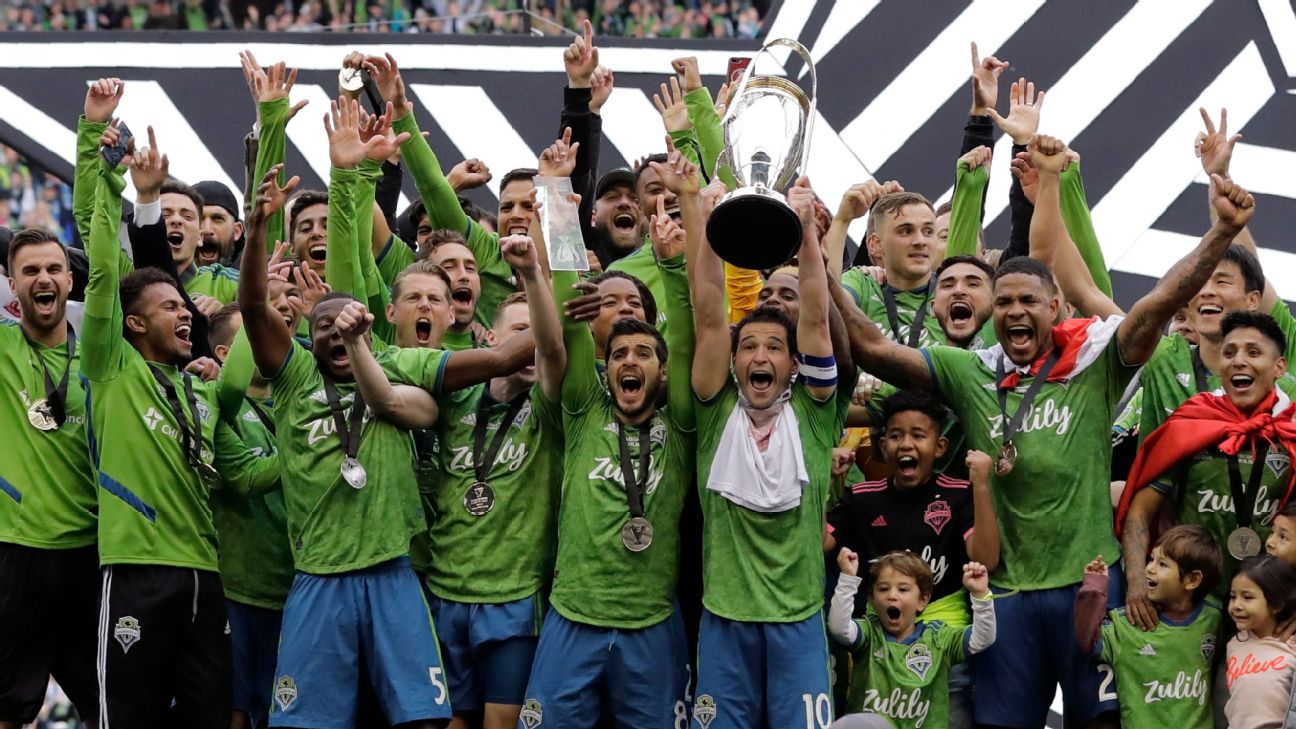 SEATTLE — Brian Schmetzer walked into his post-game press conference with the word “Family” emblazoned across his t-shirt and a well-earned beverage in his hand. He tried to thank everyone associated with the Seattle Sounders 3-1 MLS Cup triumph over Toronto FC, from the owners all the way down to most junior staff member.

Such is Schmetzer’s 40-year connection with the Sounders that he feels the ups and downs of the club more deeply than anyone else, and in that moment, he could barely get the words out, his eyes watering.

“The players and the fans, they deserve this,” he said.

Indeed they do, if for no other reason than, just like Seattle’s two previous MLS Cup final encounters with TFC, this match was a hard slog. In fact one could argue that Seattle has been outplayed in all three of its MLS Cup final appearances. And yet for the second time, they still managed to claim the title.

Sunday’s victory was in some ways incongruous, and not just because the score-line flattered the Sounders. In the previous finals Seattle had been forced to try and win on the road. This time, the Sounders had the advantage of playing before 69,274 fans at CenturyLink Field. They had hoped to play on the front foot, and ride the home crowd’s emotional momentum.

For much of the game, Seattle did nothing of the sort. Toronto not only looked much more fluid in attack, it dominated the ball. The Sounders meanwhile looked like they had just gotten acquainted with each other for a Sunday kickabout. Worse, it looked like the occasion of playing at home had gotten to the hosts.

There was a passing thought that sitting back and soaking up pressure was all part of Schmetzer’s grand tactical plan. He confessed that it was nothing of the sort.

“I give Greg [Vanney] a lot of credit for the way he prepared his team and the way they came out,” he said about the TFC manager. “But the second thing was that I didn’t think our attacking was very good in the first half either. We’d defend, defend, defend; then we’d win the ball and lose the ball again. That’s a trap that sometimes our team has [fallen] into during the course of many games this year.”

Of course, subjective terms like “outplayed” or “deserved” can be dirty words in the world of soccer. Finals the world over reward teams that execute in big moments, and that was the case in this match. Kelvin Leerdam, substitute Victor Rodriguez, and Raul Ruidiaz got the goals, and it was Rodriguez who won the game’s MVP award. But the Sounders rode some big-time performances from some heretofore unsung heroes. The center-back tandem of Roman Torres and Kim Kee-Hee repelled numerous Toronto attacks. Gustav Svensson had two assists and Cristian Roldan did what he could to keep Toronto at bay. When Toronto appeared to have an opening, there was always a foot, leg or torso to deny the Reds clean looks at goal.

– Stream a replay of the MLS Cup final on ESPN+

In many respects, the ups and downs of the Sounders season were epitomized by their center-backs. A knee injury forced Chad Marshall to retire a quarter of the way through the campaign. Torres was suspended in August for using PEDs. Xavier Arreaga arrived in midseason and at times seemed a magnet for red cards. Yet on this day, Kim and Torres provided a platform that allowed Seattle to survive the first half and win the game in the second.

“You talk about strikers being hungry to take their opportunities, with defenders that can be the same case,” said goalkeeper Stefan Frei. “You see guys trying to find a way into the game, and Roman can go in there strong and confident to clear out the ball and let his presence be known. That’s also a way to have an impact on the game as a defender.

“As defenders and goalkeepers, we don’t really have that much of an impact in terms of what everybody remembers. I think that those moments can be the ones that really change the games because maybe their key player shuts down, he gets frustrated. Then we can get possession back, whatever it may be, those moments can be big and [Kim and Torres] did a really good job with that.”

The half-time reprieve allowed Schmetzer to make some adjustments, not only having Joevin Jones and Jordan Morris switch sides, but engaging Toronto defensively higher up the field in the second half to throw them off their rhythm. Alejandro Pozuelo wasn’t nearly as impactful in the second half as he was the first.

There was luck as well. How else can one explain Leerdam’s seeing-eye deflection off TFC defender Justin Morrow in the 57th minute that put Seattle up 1-0, and tilted the game irrevocably in the Sounders favor? Rodriguez’s 76th minute tally all-but sealed he match, and when Ruidiaz took advantage of a defensive mix-up between Chris Mavinga and goalkeeper Quentin Westberg to score in the 90th minute, it was party time, even as Jozy Altidore scored a late consolation.

Not for the first time in these playoffs, Seattle wobbled, but adapted, righted itself, and eventually came out on top. That trait more than anything explains why Seattle is celebrating its second MLS Cup in four years.

“That’s the beauty of this team, we’ve won in many different ways,” said Roldan. “In the postseason I don’t think we’ve had more possession than any other team. But it doesn’t matter. You put the ball in the back of the net, you’re dangerous in the attack, that’s how championships are won.”

Schmetzer was asked what the win meant for the organization and the city. He said the moment was such that he couldn’t grasp that.

The time to savor the win begins now.