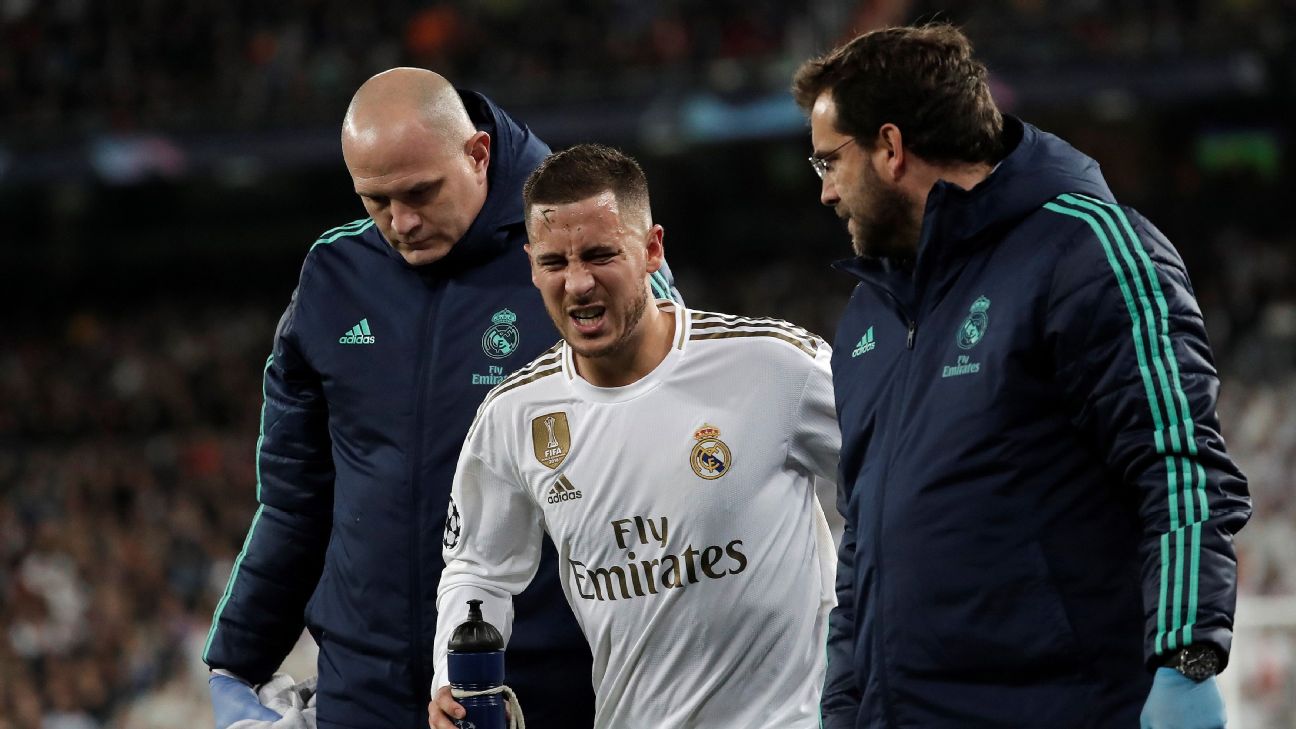 Real Madrid face an injury crisis ahead of El Clasico with Eden Hazard set to miss the game, while Gareth Bale and Marcelo are doubts, sources have told ESPN.

Hazard, ranked the No. 3 winger in ESPN FC 100, sustained an injury in Madrid’s 2-2 draw with Paris Saint-Germain in the Champions League last month.

Sources have told ESPN that medical tests revealed he has a fracture in his right ankle and in a statement on Thursday, Madrid confirmed the player has now been diagnosed with “an incomplete external microfissure” of his right ankle.

Club sources have told ESPN that Hazard had felt no improvement at the end of last week, and underwent further testing to reveal the source of the continued discomfort.

Bale is expected to miss Madrid’s next two games with a swollen left hamstring. He has not trained with his teammates for the last three days, instead taking part in gym sessions and some light recovery work at the club’s Valdebebas training complex.

A recovery time has not been given, but Hazard is expected to be out for action for at least an additional two weeks.

Madrid do not publish medical reports for Bale at the player’s request. Bale will be unavailable for their La Liga game with Espanyol at the Bernabeu on Saturday and is also likely to miss the trip to Club Brugge in the Champions League next Wednesday.

The Wales international has featured in Real Madrid’s last three games after returning from a lengthy injury layoff that saw him unavailable for his club since early October.

Marcelo is also a doubt for the Barcelona game, with Madrid confirming the Brazilian defender has suffered a calf injury. It means that Madrid could be without both first-choice left-sided players for the game at Camp Nou.

The news comes ahead of a key run of La Liga games for Madrid that includes a visit to Mestalla to play Valencia on Dec. 15 and the game with Barcelona at Camp Nou on Dec. 18.

In the case of Marcelo, the club have an able deputy in the form of Ferland Mendy. The absence of Hazard may see coach Zinedine Zidane continue with the 4-4-2 formation that proved effective in their 2-1 win at Alaves last weekend.