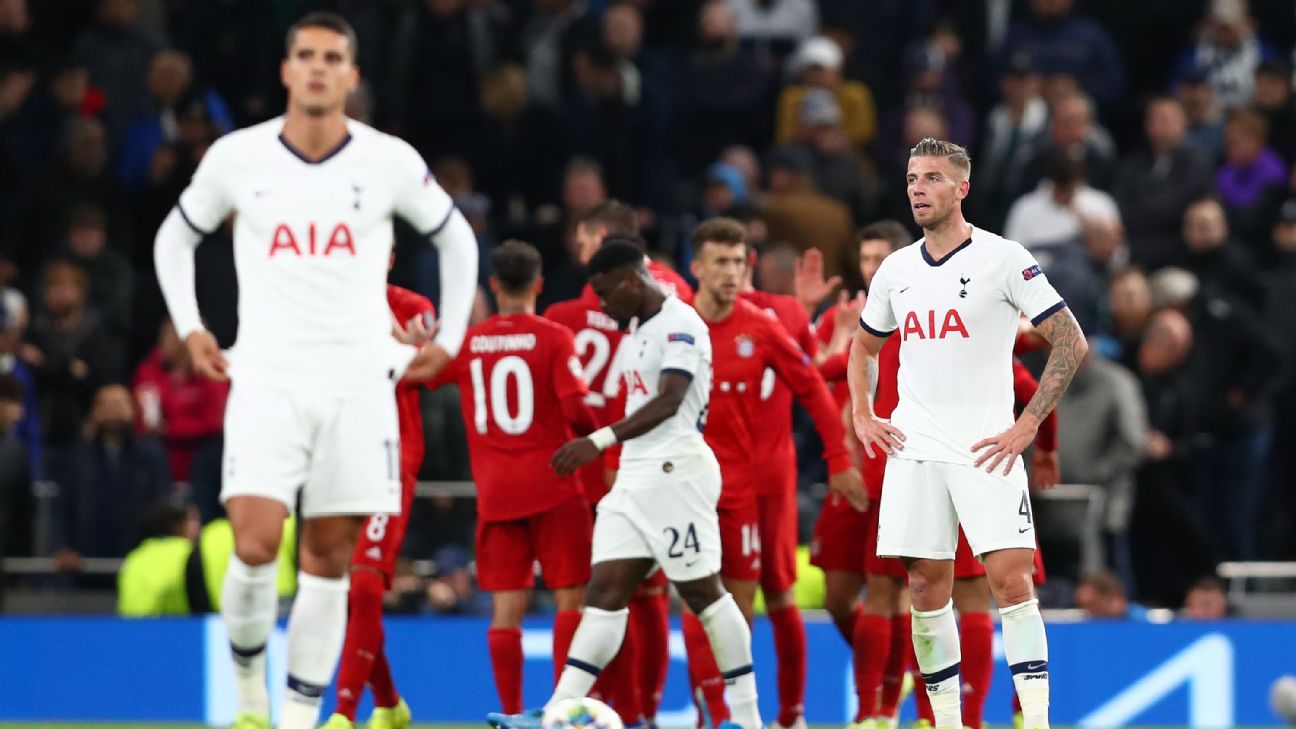 LONDON — Mauricio Pochettino called for “calm” after his Tottenham Hotspur team had just suffered the club’s biggest-ever home defeat by losing 7-2 to Bayern Munich in the Champions League on Tuesday.

After such a brutal humiliation, which resulted in the stadium being virtually empty but for the celebrating Bayern fans at the final whistle, Pochettino had two options, and he chose the diplomatic one rather than allowing his frustrations to boil over after perhaps the worst 90 minutes of his managerial career.

Spurs had allowed Bayern to take 20 shots at goals, scoring seven of them, and they ended up with the heaviest home defeat by an English club in European competition. And just to cap a horrible night for Tottenham, Serge Gnabry — a player who scored only once in 18 appearances for North London rivals Arsenal during an unproductive five-year spell at the Emirates — truly rubbed their noses in it by scoring four for Bayern.

Little wonder, then, that Pochettino attempted to lower the temperature after the game by insisting that it was no time for recriminations and finger pointing.

“It’s a moment to stick together,” he told the assembled media. “We cannot talk now, not today. We must be calm.

“We know how we feel, it’s very disappointing, so the feelings are not so good. We are not going to fix anything by shouting. We must stay calm.”

Just four months ago, Pochettino’s team were contesting the Champions League final against Liverpool in Madrid. They lost that night, but being there was an achievement in itself and it also provided justification for the Argentine’s approach and his determination to focus on the biggest competitions rather than drain his squad’s resources on the domestic cups in England.

It was a tangible sign of progress and that Pochettino was taking Spurs down the right path. But since losing to Liverpool in the Wanda Metropolitano, little has gone right for Pochettino and his team, and this dismantling at the hands of Bayern was a brutal reality check.

Since the start of this season, Spurs have won three, lost three and drawn four, scoring 18 goals and conceding the same number at the other end.

But the malaise goes beyond the start of this campaign and the defeat against Liverpool, with Tottenham suffering a miserable calendar year so far that would look far worse but for the run to the Champions League final. Pochettino’s players have won 17 and lost 16 of their 39 games in all competitions in 2019, scoring 62 and conceding 49, so they are not performing like a team on an upward trajectory.

Spurs are in a tailspin and Pochettino may no longer be the man to pull them out of it. And having repeatedly been evasive and vague on his future at the club, perhaps he no longer possesses a burning desire to be the man to do it.

But it is difficult to gauge just how impressive Bayern were, simply because Spurs were so bad. Pochettino’s team was too open and the manager failed to correct that flaw, choosing to chase the game with attackers rather than settle on damage limitation when the roof began to cave in during the final 10 minutes. His team selection was also up for debate again, with Christian Eriksen once more named on the substitutes’ bench before being thrown into the fray late in the game.

By the end of it, with Bayern scoring three goals in five minutes to make it 7-2, Pochettino’s players looked completely lost, with heads bowed and shoulders drooping.

Is Pochettino still getting his message across? Are his players listening? Those are big questions that are yet to be answered, but the manager insists that he is ready to face his critics.

“The most important thing is to move on, assess the team and our players. That is the most difficult job for us.

“After five years, our sixth season here, we need to be clearer and work like always, give solutions to the players. We are very critical of ourselves. We have to find a way to fix the problem and move on.

“It’s more psychological now. The important thing is to have one idea, one assessment and stick with this idea and start to improve.”

“I knew a few months ago it was going to be a tough season,” he said. “I told you. After the Champions League final, it was a chapter closed and we need to open another chapter for the medium or long term.

“Defeat isn’t going to change my opinion. You need to show your quality like men because, in this type of situation you must show you are strong, strong together, and bounce back.”

Pochettino is right. He and Spurs must bounce back, but on this evidence, they don’t look like they’re doing that.