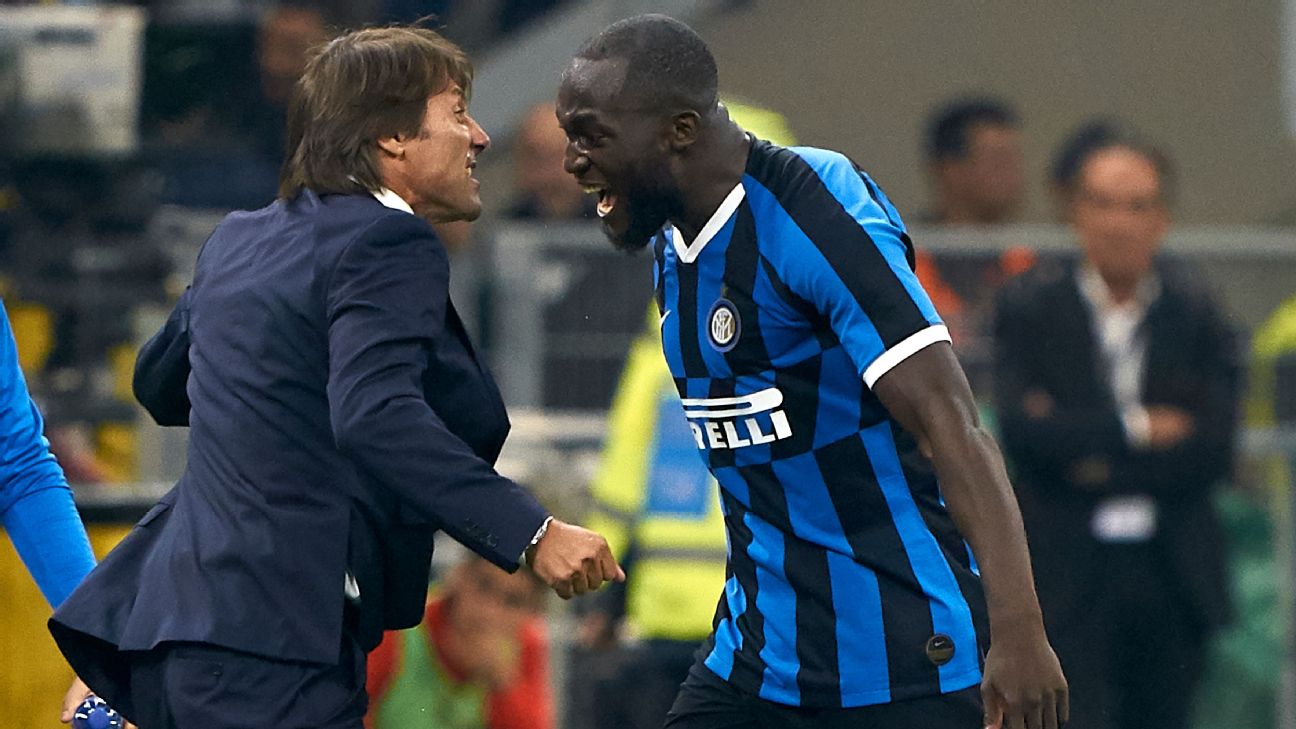 It’s fashion week in Milan and after Inter beat AC Milan 2-0 in Saturday’s derby at San Siro no one was left in any doubt over whose collection looked the better on this stretch of runway. Less than 24 hours earlier, J-Lo brought the house down at the Versace show, appearing in the iconic low-cut sheer dress she wore to the Grammys 15 years ago. Inter, styled by Antonio Conte, are looking like the Juventus team he designed in 2011. It isn’t just the fit. It’s the confidence, the swagger and how fierce Inter look in Serie A with their 100% start to the season.

The football hasn’t always been great and since the 4-0 win at Lecce on opening night the performances have been flatter, culminating in the disappointing 1-1 draw with Slavia Prague in the Champions League on Tuesday. Even then, though, the team kept fighting and got a stoppage-time equaliser, preserving an unbeaten start to the season and hinting at the never-say-die attitude Conte is working at installing.

Nicolo Barella spared blushes on Tuesday and the €49m summer signing delivered again tonight. After a slow start to his Inter career — Matias Vecino was favoured against Lecce and Cagliari — he is beginning to live up to expectation. Man of the Match in the biggest game of Inter’s season so far, he was everywhere in the second half, nipping the ball off one Milan player after another and curling in the cross for Romelu Lukaku‘s clincher.

It’s in midfield where the difference between Inter and Milan was most pronounced in this Madonnina. Stefano Sensi — the revelation of Inter’s season so far — offered so much more than his opposite number. Not only did he take turns screening Lucas Biglia and Hakan Calhanoglu to prevent Milan from playing through the middle, his runs and calls for the ball either between the lines or out wide were indicative of a player at ease in his role and fully aware of where he might be able to hurt his opponent.

Milan neither showed the same dynamism nor ideas in possession. When they did manage to elude Inter’s press it was through dribblers like Suso and new signing Rafael Leao carrying the ball up the pitch. Suso attempted to mark Inter’s playmaker Marcelo Brozovic out the game, but a lack of positional discipline and his inclination to play on the right rather than through the middle meant the Croatian got more and more time on the ball as the game wore on. Brozovic ended the game with the most completed passes (64) and opened the scoring via a deflection at the beginning of the second half. Nine of Inter’s last 11 goals have come from midfielders, a contribution reminiscent of what Conte got out of Claudio Marchisio and Arturo Vidal at Juventus.

Milan, by contrast, don’t have No. 8s who score. That may change when Giacomo Bonaventura is fit again. Franck Kessie goals aren’t from midfield and they tend to arrive from the penalty spot (and not anymore now Krzysztof Piatek is Milan’s designated taker). It means Milan are overly dependent on the Poland international and Suso for their attacking output. Question marks remain about Piatek’s ability to follow up on his stunning first season in Italy. As with Suso, who seems caught between two stools playing as an inverted winger and a 10, Milan’s two most decisive players look like fish out of water in Marco Giampaolo’s system.

Piatek is not Fabio Quagliarella. He doesn’t come short and lure defenders out of position. He can’t link up and bring others into play. Nor does he have the ability to pull a rabbit out of a hat like Giampaolo’s former striker. Milan didn’t have a single shot on goal in the 1-0 defeat to Udinese. They mustered just one against Inter and have scored only once from open play all season, needing a penalty to beat 10-man Verona.

Milan’s Chief Football Officer Zvone Boban isn’t the only one who expected his team to be further along at this stage of the season. With Milan out of Europe, Giampaolo had longer to prepare than Conte. He has six new signings to play with but continues to field almost exactly the same team as his predecessor, Gennaro Gattuso. Of the summer recruits, only Leao started against Inter. The positive spin is there is more to come from this Milan. Ismael Bennacer and Rade Krunic should add quality where it’s lacking in possession. Theo will add drive down the left and Ante Rebic looked sharp when he came on at the end.

Still the comparison with Conte remains unfavourable. You look at how quickly he has been able to get results out of Inter’s acquisitions. Four of them started tonight and the two most expensive ones [Barella and Lukaku] combined for the killer goal. The reborn Antonio Candreva entered late and almost got his team a third, begging the question: how many of Milan’s existing players has Giampaolo made better or given a new look too? Aside from Gigio Donnarumma, it’s hard to put your finger on one and he’s been covering for the team’s shortcomings.

It’s a concern particularly with Torino, Fiorentina and Genoa coming up. Inter meanwhile responded to Tuesday’s disappointment and Juventus’ win earlier in the day by going straight back to the top of the table. The Nerazzurri’s perfect league record remains intact, and their confidence is exactly where it needs to be as the difficulty rating of their schedule (Lazio, Sampdoria, Barcelona and Juventus) spikes up. Unbeaten in seven derbies for the first time in 20 years, it’s no longer a secret that Inter run this town. The bigger question is: can they rule country? Today was another step in the right direction.