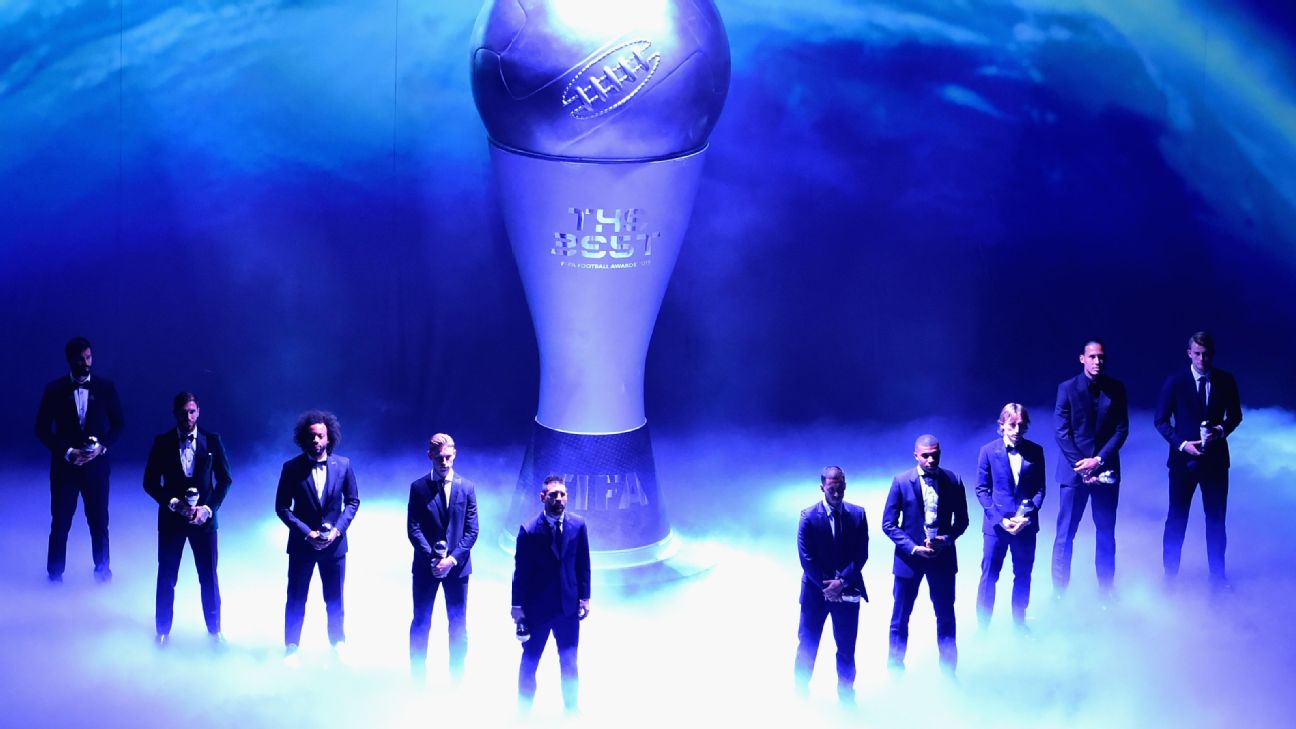 Monday night saw the annual FIFA The Best awards gala take place in Milan, as football’s great and good turned out en masse to hand out trinkets and pat each other on the back once again. Lionel Messi and Megan Rapinoe took the top player honours at the Teatro alla Scala.

There was one notable absentee however, with Cristiano Ronaldo deciding not to make an appearance, supposedly because he is trying to recover from a muscle issue in time to play on Tuesday.

Ronaldo didn’t make the 60-mile trip as Juventus were due to travel to Brescia less than 24 hours later (stream live on ESPN+), though that didn’t prevent his Bianconeri teammate Matthijs de Ligt from attending the ceremony.

Portugal captain Ronaldo posted an image on Instagram of himself with his feet up at home at around the time Messi won his award, saying: ”Patience and persistence are two characteristics that differentiate the professional from the amateur. Everything that is big today started small. You can’t do everything, but do everything you can to transform your dreams into reality. And try to keep in mind that after night always comes dawn.”

That Milan is actually en route to Brescia from Turin makes a slight mockery of that excuse, as does the fact that Messi is also due to play for Barcelona ton Tuesday evening, in a home game against Villarreal.

Messi is also due to be in action on Tuesday, a home game for Barcelona against Villarreal. His 90-minute flight home to Spain would have taken longer than Ronaldo’s drive back to Turin.

Cristiano Ronaldo failed to include Lionel Messi in his top 3 picks for The Best FIFA Men’s Player award. pic.twitter.com/RujMgLegJk

Indeed, Messi was named as the best player in the men’s game, beating Virgil van Dijk and Ronaldo into second and third place respectively.

Messi himself plumped for Ronaldo as his second pick behind Liverpool forward Sadio Mane, though it was noted that the Juve star didn’t return the favour — instead opting for a top three of De Ligt, Frenkie de Jong and Kylian Mbappe.

Ronaldo has never once voted for Messi as part of The Best awards or the Ballon d’Or, while Messi has voted for Ronaldo four times since 2010.

Also, Ronaldo was one of only three voters (from a total of 400) to pick De Ligt as his player of the year — the other two being Abdoul Ba and Dlamini Banele, the national team captains of Mauritania and Eswatini.

Ronaldo’s no-show also led to awkward scenes during the announcement of the FIFA FIFPro Men’s World XI, as 10 of the players lined up on stage as their names were announced in order.

No prizes for guessing who the eleventh inclusion was supposed to be. Still, FIFA swiftly moved on without calling out his name, simply deciding to gloss over their team being a man short.

Quizzical eyebrows were raised when Marcelo and Sergio Ramos found their way into the team of year’s defensive line at the expense of the likes of Champions League winners Andrew Robertson and Trent Alexander-Arnold.

Indeed, the omission of his teammates didn’t go down very well with a certain Liverpool centre-back.

Jose Mourinho walking out of an interview proves he will always be a savage! 🤣 pic.twitter.com/yYHv5IOD0V

Continuing with the theme of cringe-inducing awkwardness, Jose Mourinho got himself caught up in an uncomfortable moment after leaving the stage.

Having just presented USA manager Jill Ellis with The Best Women’s Coach award, Mourinho was stopped by presenter Ilaria D’Amico and asked how he’d feel about taking charge of an “inter-planetary” football team at some point in an imagined space-age future.

The former Chelsea and Manchester United coach did his best to play along while attempting to hide his obvious bemusement, before quickly walking away as soon as was sufficiently polite.

Perhaps under instruction from Mourinho, Messi was also guilty of flat-out ignoring reporters on the green carpet — effortlessly wafting past this hapless pair like they were defenders at one of the lesser La Liga teams.

Rapinoe was crowned The Best Women’s Player of the Year after winning the Golden Ball at the 2019 Women’s World Cup.

The USWNT star seized the chance to deliver a powerful winner’s speech which addressed the ongoing fight against racism and prejudice in football and the lack of equity present throughout the game.

Rapinoe also arrived at the theatre in Milan with USWNT teammate Alex Morgan with all the style we’ve come to expect from those two world champions. Iconic.

We have no words 🔥

– Was this the best own goal of all time?
– Man City’s 8-0 has nothing on these wins…
– Still got it! Solskjaer’s sumptuous chip

Thanks for the love everyone. The #Klopp effect has crashed our website (back soon). Don’t worrythough, we got you…👊

The German used his victory speech to announce that he has joined the Common Goal campaign famously championed by Juan Mata, and therefore pledged 1% of his salary to charity.

“I’m really proud and happy that I can announce that from today on I am a member of the Common Goal family,” Klopp said on stage as an ovation swept the room. “A few people obviously know it — if not, Google it. It’s a great thing.”

This led to a huge surge of interest in the Common Goal website, so much so that it actually crashed. Never underestimate the seismic power of Kloppo.

We were also treated to rare error from Alisson Becker, who was late collecting his The Best Men’s Goalkeeper award after meandering out of his seat during the ceremony.

The Brazil No. 1’s name was read out but he was nowhere to be seen. The camera immediately cut to Klopp, who was scanning the room in an attempt to locate his lost ‘keeper as presenter Ruud Gullit repeatedly called his name.

After several minutes, Allisson eventually realised that he’d won and made his way up to the stage, sheepishly apologising then explaining that “it wasn’t his fault.”

Reporter: “Ronaldo, Messi or Van Dijk, who deserves it?”

Eto’o: “The best one for me is Mohamed Salah or Sadio Mane, but they’re not here.” 😂😂 pic.twitter.com/VR8HTy4PP5

The Cameroon legend rocked up wearing what can only be described as a beguiling silk jacket, complete with Chinese motif.

Eto’o also questioned the lack of African representation at the awards, asking why Sadio Mane and Mohamed Salah — two of the best players in world football and reigning European champions — didn’t have their names acknowledged anywhere.

Also on the green carpet, a slew of famous non-footballing faces got their moment to shine, including Nurset Gokce (aka “Salt Bae”) — although no one could say for sure why he was there.

Those wondering if Diego Maradona is still a draw in 2019 can rest assured, the mere mention of his presence can pull in punters in their thousands.

The Argentina legend recently took over as head coach of Gimnasia for the remainder of the season and it looks like interest in the Superliga club has already swelled exponentially.

Indeed, almost 4,000 people tuned in to watch “Diego Cam,” a live stream of the man himself and his various reactions as he oversaw Gimnasia’s recent game against Talleres.

The single camera never left Maradona in the dugout and none of the actual match action was visible, yet scores of fans couldn’t take their eyes off the magnetic icon.

Gimnasia ultimately lost 2-1 to a late penalty though Maradona seemed unphased, instead remaining in his seat and, quite out of character, quietly pondering the result.