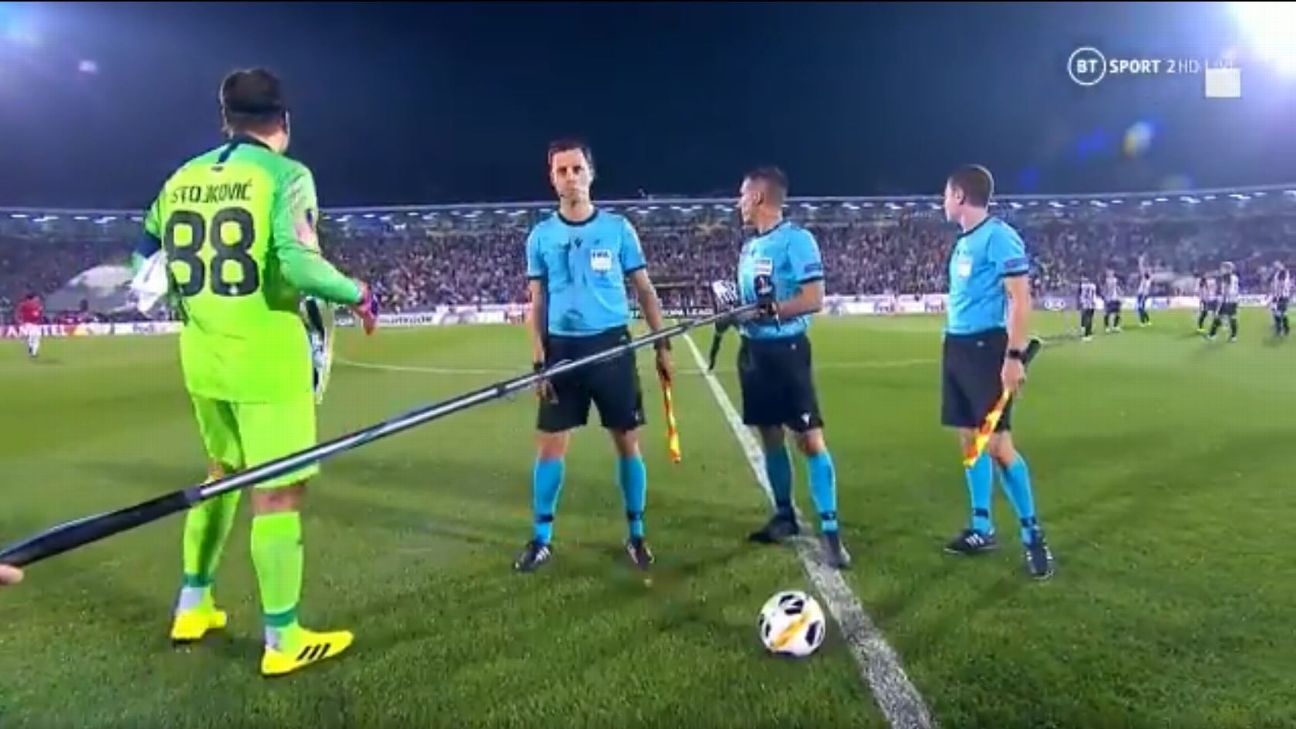 Jump to: Chris Smalling takes ball to face, referee gives penalty for handball | Liverpool fans who went to Gent instead of Genk given tickets for Gent vs. Genk in Ghent by Gent | Magic Johnson, Will Ferrell revel in LAFC’s thrilling victory in ‘El Trafico’

The visitors won 1-0, but the centre-back got his evening off to an inauspicious start when he almost missed the prematch coin toss.

Last time I did this you did the coin toss in the centre circle 🤷🏻‍♂️🤷🏻‍♂️ It’s been a long time. #LetMeOff 😂 #MUFC https://t.co/dvhPIoktMm

Maguire made light of the incident after the game, explaining that he’d missed the memo about coin tosses apparently now taking place over toward the touchline and pleading with fans to “let him off.”

He shouldn’t worry too much. After all, it’s completely normal to succumb to jitters on the first day of a new job.

Roma defender Chris Smalling endured a rough old night against Borussia Monchengladbach in the Europa League on Thursday, and through no fault of his own.

The “fun” began in the 94th minute when, with the Giallorossi trying desperately to nurse a narrow 1-0 lead over the line, Smalling conceded an extremely late penalty.

However, on closer inspection it soon became apparent that the decision was harsh to say the very least.

The ball clearly hit Smalling in the face but that didn’t stop referee Willie Collum from awarding the spot kick to Gladbach.

Disbelief that this decision went against us…
We deserved the 3 points, so disappointed… https://t.co/8MDLyhu4HX

Substitute Lars Stindl duly stepped up and converted it to draw the German side level in the very depths of injury time amid howls of derision in the Stadio Olimpico.

At least Roma can take some consolation from the fact that Gladbach are making these pithy jokes from the bottom of Group J.

Liverpool fans who went to Gent instead of Genk offered tickets to watch Gent vs. Genk in Ghent by Gent

On Thursday we featured the tale of the two hapless Liverpool fans who missed their side’s Champions League game against KRC Genk after accidentally travelling to the wrong Belgian town.

Indeed, after failing to double-check the precise spelling of their destination, the pair wound up near the stadium of KAA Gent, who are based in the town of Ghent, which is roughly 150 kilometres from their intended target of Genk, and only realised their mistake 30 minutes before kick-off.

Tag a mate who would do that 😂 pic.twitter.com/woQxaR3jZS

Thankfully, they were able to watch the game but only on a television in a local bar on the far side of the country from the Luminus Arena, where Liverpool strolled to a 4-1 win.

To help make up for their wasted trip, Gent offered Rob and Lee a pair of complimentary tickets for their Europa League tie against Wolfsburg the following day. Unfortunately, the pair were unable to accept as they had to return to England.

However, still keen to make it up to Rob and Lee, Gent have generously seen fit to make a second offer, this time laying on tickets for their upcoming home league game against — you guessed it, Genk!

So…. we’ve got the phone number of Rob & Lee and we are in touch with them. Unfortunately they already left for England so they won’t attend the game tonight. Obviously we then decided to invite them to our home game against… @KRCGenkofficial😇 #GntGnk #GntWol #UEL pic.twitter.com/js9ypaYG6w

The match is next month, giving the Reds supporters plenty of time to organise their journey and it should be a doddle for them.

After all, they know exactly where they’re going this time.

At the sixth time of asking Los Angeles FC mustered their first-ever victory in the “El Trafico” derby against LA Galaxy on Thursday night, powering to a 5-3 victory at the Banc of California Stadium to set up a Western Conference final against Seattle Sounders on Tuesday.

As you might expect, it was a special night for the Supporters’ Shield winners and their home fans.

… but not before firmly nailing his colours to the LAFC mast with a motivational message to the fans.

The prematch buzz was also accented by a truly inspired tifo in the terraces which saw Carlos Vela reimagined as Indiana Jones as a gigantic “Raiders of the Lost Ark”-themed banner was unfurled.

However, it didn’t take long before fans of the New England Revs pointed out that the Indy choreo wasn’t quite as original as first thought.

LAFC, is your Google broken?

Vela went on to score twice in the ensuing victory, which led to a shirty postmatch exchange between LAFC coach Bob Bradley and an ESPN reporter who questioned the Mexican striker’s big-game mentality.

This is the very same Carlos Vela who became the highest single-season goalscorer in MLS history just a few weeks ago, of course.

Over on the Galaxy side, their star man Zlatan Ibrahimovic was forced to leave the pitch in a rotten mood — derisory crotch grab and all — after watching his side stumble to a humbling defeat.

Not that it mattered a bit to LAFC co-owner Will Ferrell, who was already out on the field leading the cheers alongside Walker Zimmerman.

That’s one win the LAFC family will be reminiscing about for a good while to come.